10 of the Most Surprising Findings from Psychological Studies 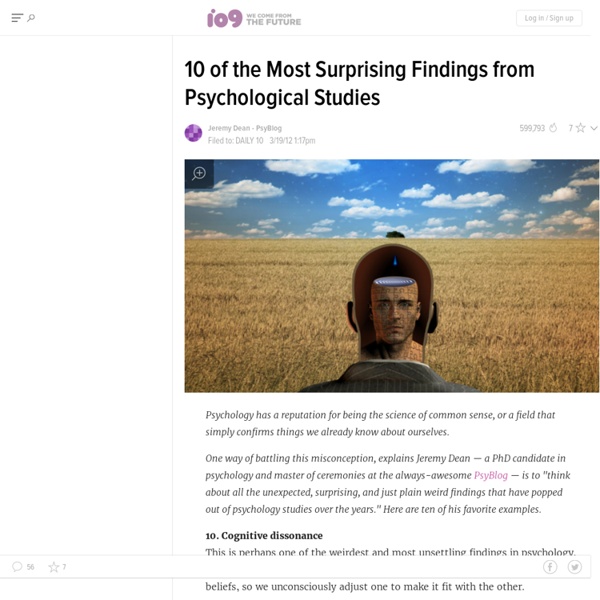 25 Psychological Life Hacks that Will Help You Gain the Advantage in Social Situations Social situations are among the most important in our lives. Yet, there is a huge chance that you are oblivious to the plethora of unwritten social rules that structure everybody’s behaviour. Failing to comply to these cultural imprints can cause irreversible damage. Just following them blindly will not get you ahead. Hacking them, however, will give you the best results possible. 1) Assume comfort in any interaction. Our brain is an incredibly complicated instrument. In most of our social interactions, we find it difficult to feel comfortable among strangers because our brain tries to protect us from exposure. This however isn’t helping us when trying to be social and meet new people, is it? This is why assuming comfort is so powerful. 2) Pay attention to people’s feet when you are approaching them. Interrupting people when they are in the middle of an important conversation is one of the most annoying things to do. If they turn both torso and feet, it means you are welcome. Admit it.

Taoism The word Tao means path or way, although the original meaning in Chinese philosophy and religion is more abstract. Behind all material things and all the change in the world lies one fundamental, universal principle which is the Way or Tao. This principle governs everything, all change and all life. Behind the multiplicity and contradictions of the world lies a unity: the Tao. "Beyond the gate of experience flows the Way, Which is ever greater and more subtle than the world." From the Tao Te Ching Major Taoist Scriptures The Tao Te Ching written by Lao Tzu. "The Way that can be experienced is not true; The world that can be constructed is not real." Zhuangzi, written by the same name sage is a book of prose, poetry, humor and disputation. The Daozang or Treasury of Tao is considered as the Taoist canon. Teachings & Beliefs Tao is the flow of the universe, the force behind the natural order that keeps the universe balanced and ordered. Taoist Practices Lao Tzu

PsychTronics How extreme isolation warps the mind Sarah Shourd’s mind began to slip after about two months into her incarceration. She heard phantom footsteps and flashing lights, and spent most of her day crouched on all fours, listening through a gap in the door. That summer, the 32-year-old had been hiking with two friends in the mountains of Iraqi Kurdistan when they were arrested by Iranian troops after straying onto the border with Iran. Accused of spying, they were kept in solitary confinement in Evin prison in Tehran, each in their own tiny cell. “In the periphery of my vision, I began to see flashing lights, only to jerk my head around to find that nothing was there,” she wrote in the New York Times in 2011. We all want to be alone from time to time, to escape the demands of our colleagues or the hassle of crowds. We’ve known for a while that isolation is physically bad for us. Yet some of the most profound effects of loneliness are on the mind. After only a few hours, the students became acutely restless. Distressing end

120 Minutes A few days ago, Seth Godin posted a brilliant piece on his blog entitled Is Effort a Myth? In it, Seth addresses the issue of luck: And that’s the key to the paradox of effort: While luck may be more appealing than effort, you don’t get to choose luck. Effort, on the other hand, is totally available, all the time. A while back, I wrote on a similar theme, arguing that luck happens to those who provide the most opportunities for luck to grow in their life, and pointing out ten things anyone can do to improve their luck. Seth takes a bit of a different route to a similar conclusion. 1. All four points are valuable life lessons, but I wanted to focus in on the first two because the point there is near and dear to my heart. If you can devote two hours a day to improving yourself and doing something to change your situation, your life will improve. All I have to do is roll back the clock two years to provide some proof of this. Two years later, it’s changed my life. So, how can you do it, too?

7 Superfoods for Your Health Were you under the assumption that a superfood is some type of strange and foreign melon from an exotic, far-off country? If so, I’m happy to inform you that superfoods come in many shapes and varieties, and some of these foods are probably in your kitchen right now! Checkout our list of delicious superfoods with phenomenal health benefits and tasty appeal. We’ve even included a super-easy smoothie recipe packed with these superfoods. Even more, this recipe is practically guaranteed to make your taste buds do a little happy dance. Enjoy! Click here to share this infographic on your website. Copy/paste the code below to add this infographic to your site.

Bananas and Monkeys Original source unknown. (But the story appears to have some basis in fact.) Start with a cage containing five monkeys. Inside the cage, hang a banana on a string and place a set of stairs under it. Before long, a monkey will go to the stairs and start to climb towards the banana. After a while, another monkey makes an attempt with the same result - all the other monkeys are sprayed with cold water. Now, put away the cold water. After another attempt and attack, he knows that if he tries to climb the stairs, he will be assaulted. Next, remove another of the original five monkeys and replace it with a new one. Most of the monkeys that are beating him have no idea why they were not permitted to climb the stairs or why they are participating in the beating of the newest monkey. After replacing all the original monkeys, none of the remaining monkeys have ever been sprayed with cold water. And that, my friends, is how company policies are made. Return to Jim Huggins' Humor Page

10 simple things you can do today that will make you happier, backed by science Happiness is so interesting, because we all have different ideas about what it is and how to get it. It’s also no surprise that it’s the Nr.1 value for Buffer’s culture, if you see our slidedeck about it. So naturally we are obsessed with it. I would love to be happier, as I’m sure most people would, so I thought it would be interesting to find some ways to become a happier person that are actually backed up by science. Here are ten of the best ones I found. 1. You might have seen some talk recently about the scientific 7 minute workout mentioned in The New York Times. Exercise has such a profound effect on our happiness and well-being that it’s actually been proven to be an effective strategy for overcoming depression. The groups were then tested six months later to assess their relapse rate. You don’t have to be depressed to gain benefit from exercise, though. 2. In NutureShock 3, Po Bronson and Ashley Merryman explain how sleep affects our positivity: 3. Love this post? 4. 5. 6. 7. 8.