Is This a Rational Discussion? Flowchart. 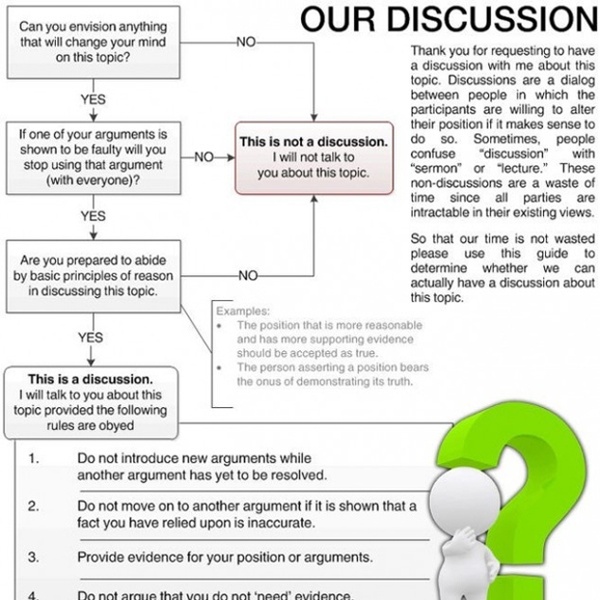 Top 10 Thinking Traps Exposed — How to Foolproof Your Mind, Part I Our minds set up many traps for us. Unless we’re aware of them, these traps can seriously hinder our ability to think rationally, leading us to bad reasoning and making stupid decisions. Features of our minds that are meant to help us may, eventually, get us into trouble. Here are the first 5 of the most harmful of these traps and how to avoid each one of them. 1. How to Disagree March 2008 The web is turning writing into a conversation. Twenty years ago, writers wrote and readers read. The web lets readers respond, and increasingly they do—in comment threads, on forums, and in their own blog posts. Many who respond to something disagree with it. How to stupidise people What makes people stupid in "educated" societies? We suggest a few factors... Either/Or controversies "Controversy equalizes fools and wise men…and the fools know it." (Oliver Wendell Holmes) Fools thrive when controversies arise over false dichotomies.

Fallacies Dr. Michael C. Labossiere, the author of a Macintosh tutorial named Fallacy Tutorial Pro 3.0, has kindly agreed to allow the text of his work to appear on the Nizkor site, as a Nizkor Feature. It remains © Copyright 1995 Michael C. Labossiere, with distribution restrictions -- please see our copyright notice.

Top 20 Logical Fallacies - The Skeptics' Guide to the Universe Introduction to Argument Structure of a Logical Argument Whether we are consciously aware of it or not, our arguments all follow a certain basic structure. They begin with one or more premises, which are facts that the argument takes for granted as the starting point. Then a principle of logic is applied in order to come to a conclusion. This structure is often illustrated symbolically with the following example: What is a logical fallacy? A "fallacy" is a mistake, and a "logical" fallacy is a mistake in reasoning. There are, of course, other types of mistake than mistakes in reasoning. For instance, factual mistakes are sometimes referred to as "fallacies". However, The Fallacy Files is specifically concerned with logical errors, not factual ones. A logical error is a mistake in an argument, that is, a mistake in an instance of reasoning formulated in language.

10 Books You Have To Read If You Believe Humans Are Rational Link of the day - Free $50 Kmart card. 1. Sway: The Irresistible Pull of Irrational Behavior Why is it so difficult to sell a plummeting stock or end a doomed relationship? Why do we listen to advice just because it came from someone “important”? Why are we more likely to fall in love when there’s danger involved? Atheism: Logic & Fallacies [ Español / Spanish ] Introduction There is a lot of debate on the net. Three Steps to Success for Creative Geniuses Creative people have it tough in this world. Despite having the skills and potential to make a tremendous impact, the odds are stacked against us. Unlike our business minded counterparts, the path to the success is not clearly defined. If you are reading this article, chances are you are what I call a genius type. You don’t have to be super-intelligent, super-creative, or super-talented to be one. Genius types simply want more out of life than most.

The NESS » How To Argue updated: June 2011 by Steven Novella, MD Arguing is one of those things most people do but few people do well. Many do not understand what a logical argument even is or how to do it correctly. Logical Paradoxes