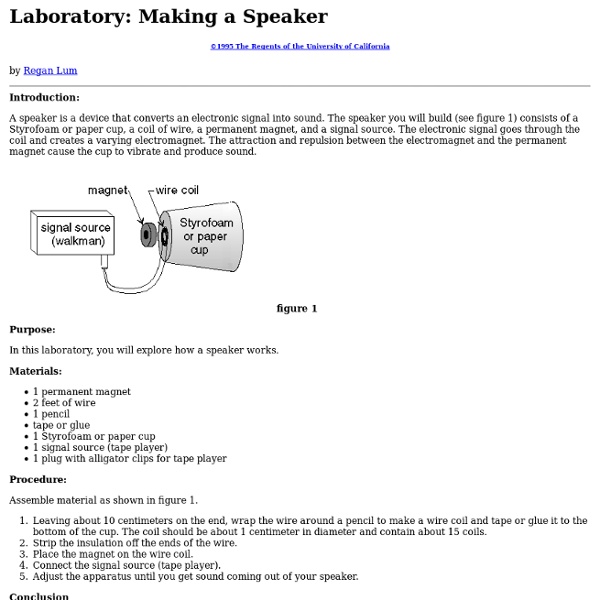 ©1995 The Regents of the University of California by Regan Lum Introduction: A speaker is a device that converts an electronic signal into sound. The speaker you will build (see figure 1) consists of a Styrofoam or paper cup, a coil of wire, a permanent magnet, and a signal source. The electronic signal goes through the coil and creates a varying electromagnet. figure 1 Purpose: In this laboratory, you will explore how a speaker works. Materials: 1 permanent magnet 2 feet of wire 1 pencil tape or glue 1 Styrofoam or paper cup 1 signal source (tape player) 1 plug with alligator clips for tape player Procedure: Assemble material as shown in figure 1. Leaving about 10 centimeters on the end, wrap the wire around a pencil to make a wire coil and tape or glue it to the bottom of the cup. Conclusion Does the volume control on the tape player work on your speaker? Return to CEA Science Education Home Page

How to Make a Three-Pendulum Rotary Harmonograph A harmonograph is a mechanical device that uses swinging pendulums to draw pictures, believed to be originally invented in 1844 by Scottish mathematician Hugh Blackburn. This 3-pendulum rotary type of harmonograph gives a wide variety of pleasant results, and is fairly easy to build once you've settled on a design and have acquired the appropriate materials and tools. This is a great project to do with kids and can result in endless experiments creating new types of geometric designs. Skip to More Results and Movie Two lateral pendulums swing back and forth at right angles to each other with arms connecting to a pen. One moves the pen from side to side, and the second moves it from front to back on the paper. A third "rotary" pendulum moves the paper by swinging on any axis or in circular motions, while the pen is drawing on it.

WHAT DO PHILOSOPHERS BELIEVE? The Visual CV: in a career spanning half a century, Sir Tom Courtenay has gone from a new-wave warrior to a grand old man, via a fool or two (usually called Norman). Irving Wardle picks his best roles on stage and screen From INTELLIGENT LIFE magazine, January/February 2013 1960 The SeagullArriving on the London stage as a RADA graduate from the fish docks of Hull, Tom Courtenay achieved overnight fame as Chekhov’s Konstantin. This was a time when British audiences were used to seeing Konstantin as a lyrically romantic juvenile.

Electronic Projects For Beginners I made a guide for those people who are still starting with their electronics hobby. I started connecting wires, batteries, bulbs, buzzers and motors when I was 4 years old . Now that I am 13 years old, I now have a good amount of experience to build complicated electronic circuits. Aerial Data Visualisation Reveals Life In The United States PBS is exploring the hidden patterns and rhythms that make America work. They are taking this data and visualizing it in a series being called, “America Revealed.” Visualization of internet distribution The pinpointed distribution of the unemployed Domino’s Pizza’s raw ingredients’ delivery routes in the Northeast Otomata New! If you like Otomata, check out my new instrument Circuli by clicking here! Update: Click here to get Otomata for your iPhone / iPod / iPad! Official facebook page:

Top 10 DIY Tech Gifts @keyboard-vomit: Yeah, but wouldn't it be awesome if some of our not so tech friends actually attempted (and accomplished) one or more of these feats? I mean, when "it's the thought that counts," shouldn't it be a thought about something we'd actually appreciate. Then again, maybe socks are your thing. ;) @HunterShoptaw: That they are, I'm wanting some socks with an integrated HDD, and some USB connectivity. 50 Life Secrets and Tips Memorize something everyday.Not only will this leave your brain sharp and your memory functioning, you will also have a huge library of quotes to bust out at any moment. Poetry, sayings and philosophies are your best options.Constantly try to reduce your attachment to possessions.Those who are heavy-set with material desires will have a lot of trouble when their things are taken away from them or lost. Possessions do end up owning you, not the other way around. Become a person of minimal needs and you will be much more content.Develop an endless curiosity about this world.Become an explorer and view the world as your jungle. Stop and observe all of the little things as completely unique events. Try new things.

How Do You Create A Culture Of Innovation? This is the third part in a series by Scott Anthony, author of The Little Black Book Of Innovation. It sounds so seductive: a “culture of innovation.” The three words immediately conjure up images of innovation savants like 3M, Pixar, Apple, and Google--the sorts of places where innovation isn’t an unnatural act, but part of the very fabric of a company. It seems a panacea to many companies that struggle with innovation. But what exactly is a culture of innovation, and how does a company build it? While culture is a complicated cocktail, four ingredients propel an organization forward: the right people, appropriate rewards and incentives, a common language, and leadership role-modeling.