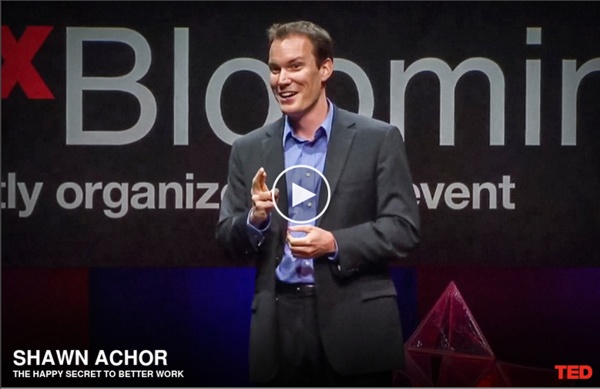 Shawn Achor Shawn Achor is the winner of over a dozen distinguished teaching awards at Harvard University, where he delivered lectures on positive psychology in the most popular class at Harvard. Shawn has become one of the world’s leading experts on the connection between happiness and success. His research on happiness made the cover ofHarvard Business Review, his TED talk is one of the most popular all time with over 4 million views, and his lecture airing on PBS has been seen by millions.

Talent Development Resources Caffeine can help enhance thinking and creativity for many people, but there are cautions about using such a potent stimulant. In an article, Maria Konnikova notes one artist who went way beyond a cup or two of caffeine to boost his creativity: writer Honoré de Balzac [1799–1850] “is said to have consumed the equivalent of fifty cups of coffee a day at his peak. He did not drink coffee, though—he pulverized coffee beans into a fine dust and ingested the dry powder on an empty stomach. He described the approach as ‘horrible, rather brutal,’ to be tried only by men of ‘excessive vigor.’ “He documented the effects of the process in his 1839 essay ‘Traité des Excitants Modernes’ (“Treatise on Modern Stimulants”): ‘Sparks shoot all the way up to the brain’ while ‘ideas quick-march into motion like battalions of a grand army to its legendary fighting ground, and the battle rages.’” But, she continues, “all of that comes at a cost.

No Business Like Snow Business: The Economics of Big Ski Resorts - Derek Thompson - Business Don't be confused by the soft powder. Ski-nomics at Vail and Whistler/Blackcomb is a hardened and savvy industry. Meet the mile-high strategies that keep America's largest ski resorts in the black. 100 Awesome Classroom Videos to Learn New Teaching Techniques With so many good teachers out there, it’s fortunate they can share their knowledge via video on the Internet. From the funny to the poignant, these glimpses into the lives of teachers and their students will keep you entertained while learning a little something as well. Whether you are a new teacher storing up tips and tricks or an experienced teacher who could just use a fresh perspective, you are sure to find something helpful among these videos. The Basics

11 Amazing Thank You Notes From Famous People Letters of Note is one of our favorite places to hang out. Since 2009 the site has curated hundreds of interesting letters, telegrams, memos and faxes, from famous people, regular people, and even fictional people. We took advantage of their hard work and rounded up these 11 thank you (and one thanks-for-nothing) letters from their archives. 1. Thank You for the Dream You Sent Me Once upon a time (1989), a little girl named Amy sent a bottle of colored water, oil and glitter to Roald Dahl, who knew right away that this was a dream in a bottle inspired by his book, The BFG.

The Happiness Habits Seven years ago as I was going through the MAPP at the University of East London, I had a distinct sense that there were two types of positive psychologists: the researchers and the practitioners. I was definitely in the latter camp. The ‘A’ in my degree title is important. We not only acquire knowledge, but we also apply it, taking the tools off campus and into communities. Community Learning Three years later I came across the pioneering Happy City Initiative at the Bristol Happiness Lectures and recognized that we shared a common goal. One of the things I’m most passionate about is broadening the approach to mental health and in particular depression recovery to raise awareness of positive psychology interventions as evidence-based self-help.

The Myth of Japan’s Failure DESPITE some small signs of optimism about the United States economy, unemployment is still high, and the country seems stalled. Time and again, Americans are told to look to as a warning of what the country might become if the right path is not followed, although there is intense disagreement about what that path might be. Here, for instance, is how the CNN analyst David Gergen has described Japan: “It’s now a very demoralized country and it has really been set back.” But that presentation of Japan is a myth. By many measures, the Japanese economy has done very well during the so-called lost decades, which started with a stock market crash in January 1990.

Free Online Resources Engage Elementary Kids (Tech2Learn Series) Teacher: As a K-5 teacher, we understand that it's really important to integrate the curriculum as much as possible. So if you're doing a lesson in the computer lab, if it's combining some of the reading skills, writing skills, language art skills, or their knowledge about a certain subject area, I think that it makes learning a lot more meaningful. Teacher: A few years ago, the District had to do a lot of cutbacks on tech spending. And I started to see that there was an advantage of using the cloud-based, or free web apps.

I first heard this today via the Brain Food podcast. What a great speaker with an important message. by jdrinkwine Feb 12