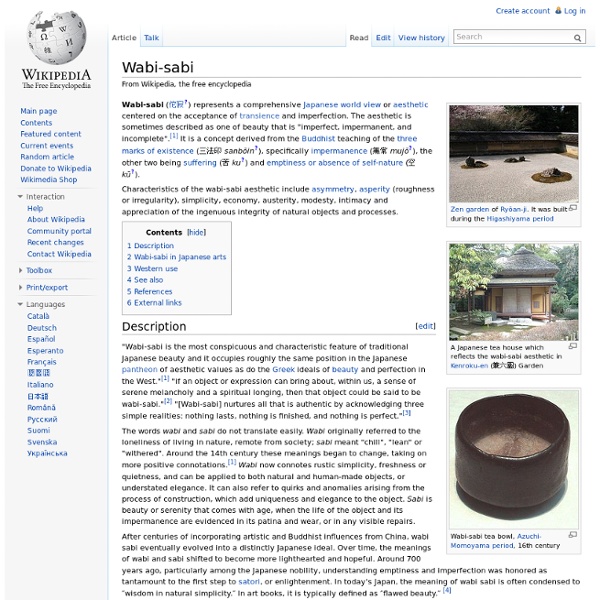 A Japanese tea house which reflects the wabi-sabi aesthetic in Kenroku-en (兼六園) Garden Wabi-sabi (侘寂?) represents a comprehensive Japanese world view or aesthetic centered on the acceptance of transience and imperfection. The aesthetic is sometimes described as one of beauty that is "imperfect, impermanent, and incomplete".[1] It is a concept derived from the Buddhist teaching of the three marks of existence (三法印, sanbōin?), specifically impermanence (無常, mujō?), the other two being suffering (苦, ku?) Description[edit] "Wabi-sabi is the most conspicuous and characteristic feature of traditional Japanese beauty and it occupies roughly the same position in the Japanese pantheon of aesthetic values as do the Greek ideals of beauty and perfection in the West".[1] "If an object or expression can bring about, within us, a sense of serene melancholy and a spiritual longing, then that object could be said to be wabi-sabi The words wabi and sabi do not translate easily. Western use[edit]

Three marks of existence The Three marks of existence, within Buddhism, are three characteristics (Pali: tilakkhaṇa; Sanskrit: trilakṣaṇa) shared by all sentient beings, namely: impermanence (anicca); suffering or unsatisfactoriness (dukkha); non-self (Anatta). There is often a fourth Dharma Seal mentioned:[citation needed] Together the three characteristics of existence are called ti-lakkhana in Pali or tri-laksana in Sanskrit. By bringing the three (or four) seals into moment-to-moment experience through concentrated awareness, we are said to achieve wisdom—the third of the three higher trainings—the way out of samsara. Thus the method for leaving samsara involves a deep-rooted change in world view. Anicca[4][edit] [Pronounced Anitcha/Anitya] All compounded phenomena (things and experiences) are inconstant, unsteady, and impermanent. Dzongsar Jamyang Khyentse Rinpoche states that in the four seals of the Mahayana, Nirvana should be viewed as "beyond extremes". Dukkha[edit] Anatta[edit] See also[edit] Buddhism

Bio The first 300 words from Wabi-Sabi: for Artists, Designers, Poets & Philosophers “Wabi-sabi is a beauty of things imperfect, impermanent, and incomplete. It is a beauty of things modest and humble. It is a beauty of things unconventional.” “The immediate catalyst for this book was a widely publicized tea event in Japan. The Japanese aesthetic of wabi-sabi has long been associated with the tea ceremony, and this event promised to be a profound wabi-sabi experience. “Admittedly, the beauty of wabi-sabi is not to everyone’s liking. Undesigning the Bath Gardens of Gravel and Sand 13 Books Arranging Things: A Rhetoric of Object PlacementThe Flower Shop: Charm, Grace, Beauty, Tenderness in a Commercial Context Which "Aesthetics" Do You Mean? Mottainai Mottainai (もったいない?, [mottainai]) is a Japanese term conveying a sense of regret concerning waste.[1] The expression "Mottainai!" can be uttered alone as an exclamation when something useful, such as food or time, is wasted, meaning roughly "what a waste!" Mottainai is an old Buddhist word, which has ties "with the Shinto idea that objects have souls Usage and translation[edit] Mottainai in Japanese refers to more than just physical waste (resources). As an exclamation ("mottainai!") History[edit] Origins[edit] In ancient Japanese, mottainai had various meanings, including a sense of gratitude mixed with shame for receiving greater favor from a superior than is properly merited by one's station in life.[1] One of the earliest appearances of the word mottainai is in the book Genpei Jōsuiki (A Record of the Genpei War, ca. 1247).[8] Mottainai is a compound word, mottai+nai.[9] Mottai (勿体?) Mottai was originally used in the construction mottai-ga-aru (勿体が有る? Efforts to revive the tradition[edit]

Feng shui Feng shui ( i/ˌfɛŋ ˈʃuːi/;[1] i/fʌŋ ʃweɪ/;[2] pinyin: fēng shuǐ, pronounced [fɤ́ŋ ʂwèi] ( )) is a Chinese philosophical system of harmonizing everyone with the surrounding environment. Historically, feng shui was widely used to orient buildings—often spiritually significant structures such as tombs, but also dwellings and other structures—in an auspicious manner. Qi rides the wind and scatters, but is retained when encountering water.[3] Feng shui was suppressed in mainland China during the cultural revolution in the 1960s, but since then has increased in popularity. Modern reactions to feng shui are mixed. History[edit] Origins[edit] Cosmography that bears a striking resemblance to modern feng shui devices and formulas appears on a piece of jade unearthed at Hanshan and dated around 3000 BC. Beginning with palatial structures at Erlitou,[12] all capital cities of China followed rules of feng shui for their design and layout. Early instruments and techniques[edit] Foundation theories[edit] East

Mono no aware Mono no aware (物の哀れ?), literally "the pathos of things", and also translated as "an empathy toward things", or "a sensitivity to ephemera", is a Japanese term for the awareness of impermanence (無常, mujō?), or transience of things, and both a transient gentle sadness (or wistfulness) at their passing as well as a longer, deeper gentle sadness about this state being the reality of life. Origins[edit] The term was coined in the 18th century by the Edo period Japanese cultural scholar Motoori Norinaga and was originally a concept used in his literary criticism of The Tale of Genji, later applied to other seminal Japanese works including the Man'yōshū. It became central to his philosophy of literature and eventually to Japanese cultural tradition. Etymology[edit] The phrase is derived from the Japanese word mono (物?) In contemporary culture[edit] In the book A Lonely Resurrection by Barry Eisler, a character describes the concept of mono no aware as "the sadness of being human See also[edit]

Memento mori Earthly Vanity and Divine Salvation by Hans Memling. This triptych contrasts earthly beauty and luxury with the prospect of death and hell. The outer panels of Rogier van der Weyden's Braque Triptych shows the skull of the patron displayed in the inner panels. The bones rest on a brick, a symbol of his former industry and achievement.[1] Memento mori (Latin: "remember (that you have) to die"[2]) is the medieval Latin theory and practice of reflection on mortality, especially as a means of considering the vanity of earthly life and the transient nature of all earthly goods and pursuits. In art, memento mori are artistic or symbolic reminders of mortality.[2] In the European Christian art context, "the expression... developed with the growth of Christianity, which emphasized Heaven, Hell, and salvation of the soul in the afterlife Historic usage[edit] Classical[edit] Europe — Medieval through Victorian[edit] Prince of OrangeRené of Châlon died in 1544 at age 25. Use by religious[edit]

Yijing Dao - Annotated links to other Yijing sites (Last updated April 2014) See also: The I Ching on YouTube. If you find any of these sites down or gone try plugging the URL into the waybackmachine. Some academic institutions seem to love changing the URLs of PDFs, as if they haven't heard the web is made of linkages, so now I'm just uploading them here. This page is ongoing, new links and site reviews are usually fed in at the bottom. Yi Jing: Oracle of the Sun LiSe Heyboer is one of the few whose interest in the Yijing has inspired her to research the original etymology of the Chinese characters. This is an excellent site, and encouraging to any who delve into the Chinese characters themselves. LiSe is one of the wives of the Dutch artist Anton Heyboer, who has a website here too put together by LiSe. I Ching with Clarity The I Ching on the Net Greg Whincup's site of Yijing links. Yijing Bagua Yijing Matrices I think this is a very interesting site, a lot of material on structural matters by Pieng-Lam Kho. I Ching Cosmos Yijing Algebra