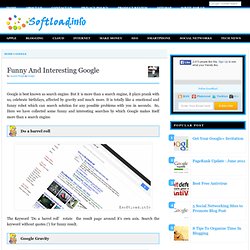 But it is more than a search engine, it plays prank with us, celebrate birthdays, affected by gravity and much more. It is totally like a emotional and funny robot which can search solution for any possible problems with you in seconds. So, Here we have collected some funny and interesting searches by which Google makes itself more than a search engine. Do a barrel roll The Keyword ‘Do a barrel roll’ rotate the result page around it’s own axis. The 7 Most Baffling Things About Women's Clothes. There are a lot of annoying things about being a woman, like periods, childbirth and not being able to play basketball in a way that keeps spectators awake. 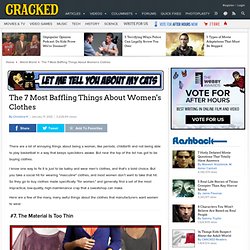 But near the top of the list has got to be buying clothes. 7 TV Ads That Take Themselves Way Too Seriously. This 1993 commercial features the Velvet Underground in the soundtrack, and upon first viewing it you'll probably have trouble telling it apart from an actual music video. 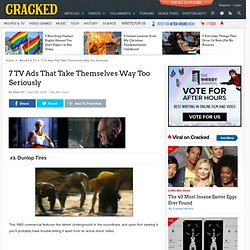 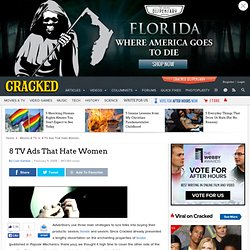 Since Cracked already presented a lengthy dissertation on the enchanting properties of boobs (published in Popular Mechanics, thank you), we thought it high time to cover the other side of the equation. 6 Simple Products That Advertisers Pretend Are Complicated. Nobody is ever going to improve the fork. 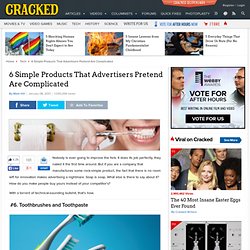 It does its job perfectly, they nailed it the first time around. But if you are a company that manufactures some rock-simple product, the fact that there is no room left for innovation makes advertising a nightmare. 5 World-Famous Products That Are Shameless Rip-Offs. You know a product or brand has become a big deal when cheap, generic knockoffs start showing up everywhere: Transformers had Go-Bots, Bruce Springsteen had John Mellencamp and Mad magazine had Cra ... um, you get the idea. 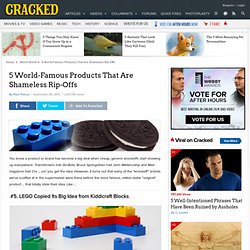 However, it turns out that many of the "knockoff" brands we've scoffed at in the supermarket were there before the more famous, million-dollar "original" product ... that totally stole their idea. Like ... #5. LEGO Copied Its Big Idea from Kiddicraft Blocks. 6 Isolated Groups Who Had No Idea That Civilization Existed. Maybe you're proud of the fact that you still haven't updated to Facebook Timeline or started a Twitter account, or that you still read all of your books on paper. 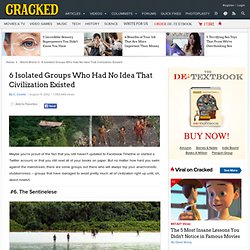 But no matter how hard you swim against the mainstream, there are some groups out there who will always top your anachronistic stubbornness -- groups that have managed to avoid pretty much all of civilization right up until, oh, about nowish. #6. The Sentinelese Via Ferrebeekeeper The Sentinelese tribe make their home on North Sentinel Island, India. Via Survivalinternational.org"That's good. How Did They Avoid the Modern World for So Long?

Easy. Via Survivalinternational.org The whole tribe is set on Aggro Mode. In 2006, two fishermen whose boat drifted into the shallows near the island were killed by the Sentinelese and then buried in shallow graves. And it worked: The modern world just up and backed the hell down. Via Andaman.orgThis website claims this is the closest shot of a Sentinelese ever taken. . #5. . #4. 15 Comparisons of Celebrities Who Are the Same Age But Don't Look It (Part. 2!) The 6 Most Needlessly Detailed Wikipedia Entries. Wikipedia has become an irreplaceable resource for anyone looking to find just enough possibly factual information to fake their way through a conversation about any given topic. 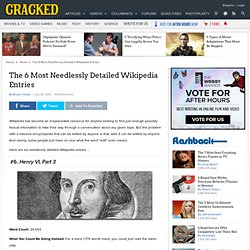 But the problem with a massive encyclopedia that can be edited by anyone is that, well, it can be edited by anyone. And clearly, some people just have no clue what the word "edit" even means. Here are six needlessly detailed Wikipedia entries ... #6. Henry VI, Part 3 Word Count: 24,053 What You Could Be Doing Instead: For a mere 1,774 words more, you could just read the damn play. Most Useless Section: The "Language" section, a nearly 2,000-word behemoth wall of text that breaks the play down in language normally reserved for trying to explain the importance of a holding penalty late in the fourth quarter of a Monday Night Football game to a person who doesn't watch sports.

9 Actors Who Do the Exact Same Thing on Every Movie Poster. You wouldn't think there'd be many specific rules for movie posters beyond "make the star look cool" and "don't show any dong. 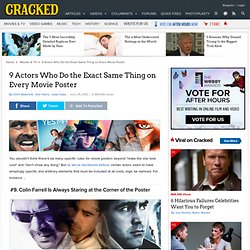 " But as we've mentioned before, certain actors seem to have amazingly specific and arbitrary elements that must be included at all costs, logic be damned. For instance ... #9. Colin Farrell Is Always Staring at the Corner of the Poster Colin Farrell is a man of many faces, and all of them seem oddly fascinated by the corners of his posters. "Nothing soothes my troubled soul like a 90 degree angle. " It started innocently enough in the poster for 2001's American Outlaws, with an understated corner-spotting pose he'd later break out again in 2010's London Boulevard: