Adam hills. Well, the last regular show of Mess Around was one to remember – for many reasons. 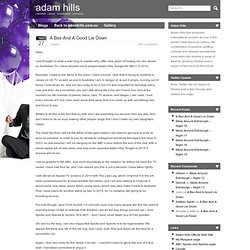 After doing my usual faffing about with the crowd, I stumbled upon a young couple who looked very much in love. His name was Alexander, and he had traveled eight hours from John-O-Groats to be with his girlfriend. It was your classic love story – a psychology and history student working as a barmaid, courted by a Royal Tour Guide of the Castle Mays (I think that’s what he said) Compared to the couple of thirty years alongside them, it was like a before and after shot Meanwhile two guys in the front row provided a slightly different before and after shot However the excitement of the night came via an absent Olympian. You may remember a few nights ago I called Silver medallist Michael Jamieson from the stage, after a mate in the audience gave me his number. As if written by a Hollywood screenwriter, Michael made it in the dying minute of the show. 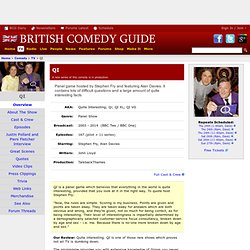 QI is one of those rare shows which proves not all TV is dumbing down. The programme provides you with extensive knowledge of things you never knew existed, and corrects knowledge that you always believed to be true. For example Henry VIII did not have six wives, Sweden does not have the world's highest suicide rate, and the Scottish did not invent haggis. To be a comedy though, QI needs to be more than just interesting. Was It Something I Said? - C4 Panel Show. Words, wonderful, words... 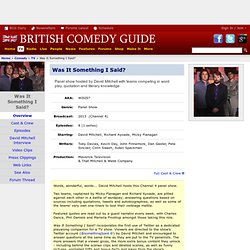 David Mitchell hosts this Channel 4 panel show. Two teams, captained by Micky Flanagan and Richard Ayoade, are pitted against each other in a battle of wordplay; answering questions based on sources including quotations, tweets and autobiographies, as well as some of the teams' very own one-liners to test their verbiage mettle. Featured quotes are read out by a guest narrator every week, with Charles Dance, Phil Daniels and Mariella Frostrup amongst those taking this role. 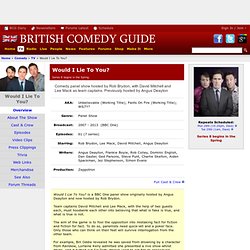 Is a BBC One panel show originally hosted by Angus Deayton and now hosted by Rob Brydon. Team captains David Mitchell and Lee Mack, with the help of two guests each, must hoodwink each other into believing that what is fake is true, and what is true is not. The aim of the game is to fool the opposition into mistaking fact for fiction and fiction for fact. To do so, panellists need quick-wit and a poker face. Only those who can think on their feet will survive interrogation from the other team. For example, Bill Oddie revealed he was saved from drowning by a character from Rainbow, Lorraine Kelly admitted she presented a live show whilst drunk, and it turned out Sir Terry Wogan used to set fire to colleague's scripts live on air. Comedy Central UK and Ireland. Have I Got News For You - BBC1 / BBC2 Panel Show. Our Review: Have I Got News For You is arguably Britain's most popular topical panel game. 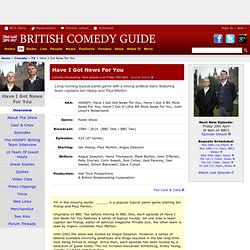 The series has many different qualities. On the one hand, there is Merton's surrealism and his ability to improvise on a wide range of different subjects. On the other hand, there is Hislop's undeniable in-depth knowledge of politics and political scandals - this combination of skills and experience ensures 30 minutes are filled with laughter. When Deayton was forced out mid-way through Series 24 due to his own personal scandal (many fans still feel forcing Deayton to quit was a mistake), the future of Have I Got News For You was very much in doubt. However, the show managed to steer a course through this tricky season... 8 Out of 10 Cats. BBC Two - Never Mind the Buzzcocks. The Goon Show Site - Goons Downloads, Pictures, Episodes, Scripts and More.

BBC Radio 4 Extra - Round the Horne. I'm Sorry I Haven't A Clue - Radio 4 Panel Show. Our Review: ISIHAC is one of Britain's most loved radio shows. 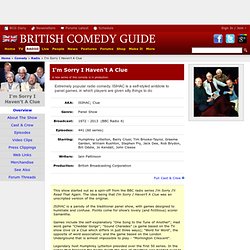 It is amongst the handful of legendary British audio comedy formats, listened to around the world. The show has won several awards and attracted many fans; it is easily one of the most popular programmes on BBC Radio 4 (even repeats bring large ratings). The programme is considered so good, that some of its more famous fans do not want to appear on it for fear of spoiling it; amongst them Armando Iannucci. Following the death of host Humphrey Lyttelton in 2008 there was a big question mark over whether the show would return. However, later in that year, producer Jon Naismith and the regular panellists publically announced that they would like to continue... an idea that was backed up by letters from listeners.

However, the show continuing may have been a mistake. Daily Haha — Your Daily Dose of Fun & Laughs. Simonscat. Welcome to the Simon's Cat Youtube channel! 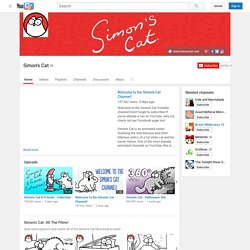