Jade Mountain St. Lucia: Where All Rooms Have Infinity Pools 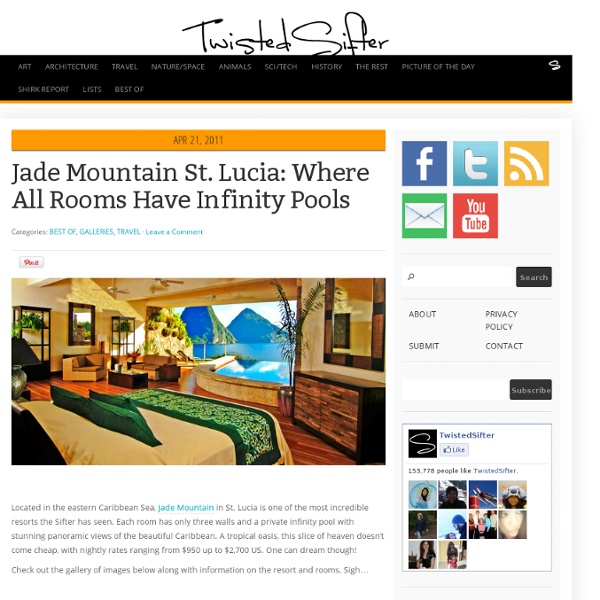 Located in the eastern Caribbean Sea, Jade Mountain in St. Lucia is one of the most incredible resorts the Sifter has seen. Each room has only three walls and a private infinity pool with stunning panoramic views of the beautiful Caribbean. A tropical oasis, this slice of heaven doesn’t come cheap, with nightly rates ranging from $950 up to $2,700 US. One can dream though! Check out the gallery of images below along with information on the resort and rooms. Rising majestically above the 600 acre beach front resort of Anse Chastanet, Jade Mountain is a cornucopia of organic architecture celebrating St Lucia’s stunning scenic beauty. Architect owner Nick Troubetzkoy has expanded upon his philosophy of building in harmony with Caribbean nature in his creation of Jade Mountain. Expect grand sweeping spaces where bedroom, living area and an extravagant private infinity pool glide into one another to form extraordinary platforms floating out into nature.

Download YouTube Videos and Convert them for Free 10 craziest hotels in the world. Hôtel de Glace, Canada – an ice hotel opened only during winter Made entirely of ice and snow, this unique one-story structure has been rebuilt each year since 2000. The 9th season of the Ice Hotel lasted from January 4th through March 29th 2009. The Ice Hotel has become an unparalleled and world-famous winter experience. It takes 5 weeks, 500 tons of ice, and 15,000 tons of snow to craft the Ice Hotel with its ceilings as high as 18 feet, walls covered with original artwork and furniture carved from ice blocks. Waterworld Hotel, China – an amazing aquatic themed hotel Atkin's Architecture Group won first prize for an international design competition with this stunning entry. Sala Silvergruva, Sweden: a single room hotel inside a silver mine Picture this A single suite, 155m underground in historic Sala Silvermine, one of the world's best preserved mine settings. Das Park Hotel, Austria: a hotel where rooms are made of concrete pipes Jumbo Hostel ( Stockholm ): World's First Aircraft Inn

Banksy Banksy is iconoclastic. It’s hard not to see a work of graffiti done in stencil and not think of him, and that’s saying a lot. His work is simple and it is his daring and perfect wit that has made him famous, and known to many of you. We love him for making us stop, or making us laugh at some of life’s grim realities that we often ignore. Top 10 Most Haunted Cities in the U.S. Visit even the smallest of towns in the U.S. and you’re likely to hear some local ghost stories and discover a few haunted houses. But some American cities have gained the reputation for being particularly ghost-ridden thanks to their rich and often bizarre historical backgrounds. The following are ten of the most haunted cities to steer away from—or toward, if you dare—this Halloween. 10. San Francisco’s rich cultural makeup, large immigrant population, and a history of natural disasters like earthquakes have helped it develop a reputation as a Mecca of all things haunted. Most Haunted Place: Alcatraz Alcatraz Island is one of San Francisco’s most famous landmarks, but the former maximum-security prison is also home to some of the city’s weirdest ghost stories. 9. Sunny Key West might not seem like the most probable setting for haunted houses, but this small beach community is home to some of the oldest—and downright creepiest—of all ghost stories. Most Haunted: Robert the Doll 8. 7. 6.

Most Extreme Landscapes on Earth Our globe is home to some truly breathtaking and extraordinary sights. Be it strangely-shaped rock formations, alien-looking sulfur springs or unique chocolate hills, the world is full of such beautiful phenomena that no words can describe it. Pictures may help... Sharply eroded buttes, pinnacles, and spires are the main features of Badlands National Park, South Dakota, USA. Incredible basalt columns can be found on the northeast coast of the Northern Ireland and on Staffa, a small island in Scotland. Apparently, the Chocolate Hills are not covered in the cocoa trees, and their name derives from the grass turning brown during the dry season. Penitentes in Death Valley. The tall thin blades of hardened snow or ice can be found only at high altitudes. Penitenes in Andes. The high red sand dunes called Sossusvlei are located in the central Namib Desert, within Namib-Naukluft National Park, Namibia. The Stone Forest, Kunming, China - Yunnan Province.

PDFmyURL.com - Free & Online: Convert and save PDF from any web page School of Art and Design Creativity Test Clever advertising campaign for Panamericana School of Art and Design encourages people everywhere to test their creativity. The objective is to draw as many things as possible that originate from X’s or O’s. How far does your creativity go? Advertising Agency: AlmapBBDO, São Paulo, Brazil

Project of the Month 20 PSD Tuts That Will Turn You Into A Photoshop Guru Many people can use Photoshop, but only a select few can call themselves gurus. Learn all the methods in the 20 tutorials below and you’ll be well on your way to joining this elite. Rather than focus on tuts for beginners, intermediates or advanced users, we’ve simply chosen ones which produce jaw-dropping effects. All of them are easy to follow, although most do require at least some prior knowledge and experience. 1. Colorful Plexi Text Effect Follow this tutorial to create dazzling, multi-layered, semi-transparent lettering, with a Perspex-like quality. 2. 3D Pixel Stretch Effect File this tutorial under “simple but effective”. 3. Turn a simple cityscape into a torrentially flooded wasteland. 4. Become the master of light and glow on Photoshop with this brief, easy-to-follow guide. 5. Use masking tools, layers, gradients and lines to turn your favorite piece of 3D text into something more colorful and commercial. 6. 7. This tutorial is so versatile. 8. 9. 10. 11. 12. 13. 14. 15. 16.