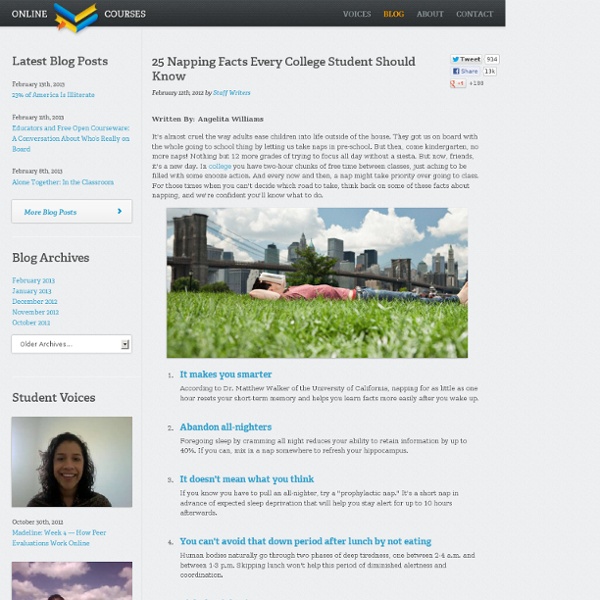 Written By: Angelita Williams It's almost cruel the way adults ease children into life outside of the house. They got us on board with the whole going to school thing by letting us take naps in pre-school. But then, come kindergarten, no more naps! Nothing but 12 more grades of trying to focus all day without a siesta. But now, friends, it's a new day. It makes you smarter According to Dr. If it was good enough for them… Presidents JFK and Bill Clinton used to nap every day to help ease the heavy burden of ruling the free world.

Apple Earnings Victor Krull Share on Facebook Share on Twitter The increase was primarily driven by iPhone, iPad and Mac sales. Life Life is a characteristic distinguishing objects having signaling and self-sustaining processes from those that do not,[1][2] either because such functions have ceased (death), or because they lack such functions and are classified as inanimate.[3][4] Biology is science concerned with the study of life. Though life is confirmed only on the Earth, many think that extraterrestrial life is not only plausible, but probable or inevitable.[15][16] Other planets and moons in the Solar System have been examined for evidence of having once supported simple life, and projects such as SETI have attempted to detect radio transmissions from possible alien civilizations. According to the panspermia hypothesis, microscopic life exists throughout the Universe, and is distributed by meteoroids, asteroids and planetoids.[17] Early theories Materialism

Handwriting Helps You Learn Typing is fast. Handwriting is slow. Weirdly, that's precisely why handwriting is better suited to learning. Take it from research psychologists Pam A. Mueller of Princeton University and Daniel M. Alzheimer's is really just 'type-3' diabetes, new research shows (NaturalNews) Emerging research on the widespread degenerative brain disease known as Alzheimer's suggests that this prevalent form of dementia is actually a type of diabetes. Published in the Journal of Alzheimer's Disease, a recent study out of Rhode Island Hospital (RIH) confirms that Alzheimer's is marked by brain insulin resistance and corresponding inflammation, a condition that some researchers are now referring to as type-3 diabetes. Dr. Suzanne de la Monte from RIH is the one responsible for making this fascinating connection, having found in her research that diabetes is closely associated with several key neuronal factors implicated in dementia.

The Charles Schultz Philosophy The following is the philosophy of Charles Schultz , the creator of the "Peanuts" comic strip. You don't have to actually answer the questions. Just read the e-mail straight through, and you'll get the point. 1. Name the five wealthiest people in the world . 13 Ways To Enjoy Your Life Without Spending A Lot Of Money EmailEmail If you feel you need to have a lot of money to really enjoy life, I am afraid you are sadly mistaken. The greatest things in life are those worthwhile experiences and subtle occurrences that sometimes most individuals simply take for granted. 100 Things we all should Know Website Design that makes your website work Website designers in Pretoria, Gauteng Have you had bad run-ins with web designers ?