Most performers want their audiences to like them. I just want to be Stewart Lee. I’ve done a fair amount of solo performing throughout my career – in fact, I started out as a stand-up comedian, and from time to time I revisit that sort of shtick, doing little gigs in the upstairs rooms of pubs. 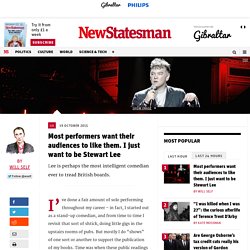 Mock The Week isn't the problem... : Correspondents 2011. I keep getting dragged in to an argument on Twitter, an argument with people who ostensibly are attempting to fight my corner, but in reality do not understand the industry I work in at all and are making up ‘facts’ to fit their views, not looking at what actually happens and trying to alter it at that level. 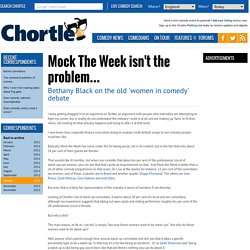 I now know how corporate finance executives trying to explain credit default swaps to non industry people must feel like. Basically Mock the Week has come under fire for being sexist, not in its content, but in the fact that only about 18 per cent of their guests are female. That sounds like it's terrible, but when you consider that about ten per sent of the professional circuit of stand-ups are women, you can see that that's quite an improvement on that. From Amy Schumer to Waterford Whispers: two kinds of political comedy. The very funny Amy Schumer is in Dublin for a premiere of her new Judd Apatow directed movie, Trainwreck. 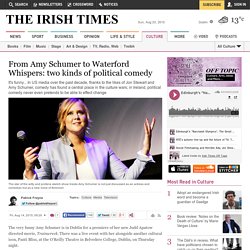 There was a live event with her alongside another cultural icon, Panti Bliss, at the O’Reilly Theatre in Belvedere College, Dublin, on Thursday night. Schumer is tearing up the zeitgeist. The star of the witty and profane sketch show Inside Amy Schumer, she’s not just discussed as an actress and comedian but as a new voice of feminism. This is thanks to some blackly satirical sketches that we get to see over here on late at night on Comedy Central or as little viral injections on Youtube (actually the online hits are bigger than the actual show, which has a modest audience). In short, she is a kind of a genius. In American media over the past ten years, comedy has, weirdly, become part of the national discussion. That Joke Isn’t Funny Anymore (and it’s not because of “political correctness”) That Joke Isn’t Funny Anymore (and it’s not because of “political correctness”) The Atlantic recently published the cover article for their September issue — it’s entitled “That’s Not Funny: Today’s College Students Can’t Take a Joke,” by Caitlin Flanagan.

It is very similar in tone to recent essays that have appeared in Salon and New York Magazine, all of which argue that the recent rise in “political correctness” is destroying comedy, college campuses, liberal politics, and perhaps civilization more generally. Flanagan’s article opens with three comedians who are about to perform at the National Association for Campus Activities (NACA). Being a right-leaning comedian may be lonely, but there's plenty to laugh at about the left. The Edinburgh fringe seems – despite its left leaning alternative heritage -- to be the epitome of a free market scrum. 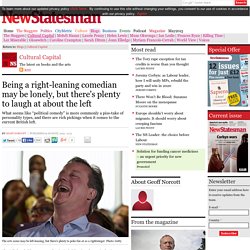 A massive trade fair with dick-waving posters and comic’s mugs on the side of buses like North Korean dictators. However, no matter the size of their marketing budget, they’re usually left of centre. Dara O'Briain reacts to 'bitter, self-delusional' Andrew Lawrence's comments about 'balding, fat' comedians cracking 'cheap' Ukip jokes - People - News - The Independent. "Can't help but notice increasingly, a lot 'political' comedians cracking cheap and easy gags about Ukip, to the extent that it's got hack, boring and lazy very quickly," Lawrence, who has appeared on shows Live at the Apollo and Ask Rhod Gilbert, posted via his official Facebook account. 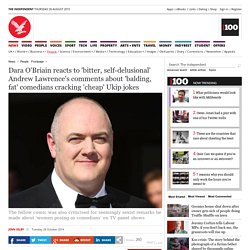 "Yet the Clacton by-election victory and what looks to be a likely victory in the Rochester by-election goes to show that Ukip have their supporters," he continued. "Out of touch, smug, superannuated, overpaid TV comics with their cosy lives in their west-London ivory towers taking a supercilious, moralising tone, pandering to the ever-creeping militant political correctness of the BBC with their frankly surreal diversity targets. " In since deleted Twitter posts, Ó Briain commented on Lawrence’s claims today. Nish Kumar: could this be the year for the shockingly inoffensive standup? If rape jokes are finally funny it's because they're targeting rape culture. In 2012 US comedian Daniel Tosh made a series of jokes about rape at a comedy club in Hollywood. 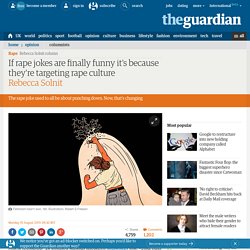 An audience member reportedly interrupted him: “Rape jokes are never funny.” Tosh allegedly responded: “Wouldn’t it be funny if that girl got raped by like five guys right now?” The woman blogged about it, and her blog and the incident got a lot of attention. 3 ways to reform toxic masculinity after Gamergate. One of the ongoing missions of my writing is to make men better. 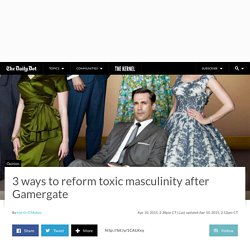 Self-improvement is one of the keys for men who want to have greater social success—whether it be sexual, romantic or otherwise. Unfortunately, the idea of “what it means to be a man” tends to get in the way. As more and more men confront the fact that the white, heterosexual male is no longer the automatic default, more and more people cling to a fetishized ideal of “manhood” predicated on supposedly “natural” aspects of manliness that men should supposedly aspire to have. But these “ideal, manly” traits actively harm men and women—a form of toxic masculinity. Of course, just saying the words “toxic masculinity” is enough to prompt some people to immediately become defensive and aggressive. I’ve written before about how toxic masculinity hurts men and women. The anatomy of a joke. Who's Laughing? Trans Women as Humor Objects and Humor Agents. Two years ago, I summoned the courage to stop lying to myself and come out of the closet, beginning my transition to humorless killjoy professional-victim uptight bitch. 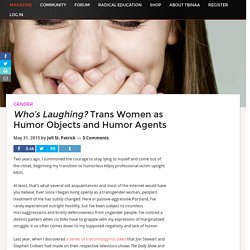 At least, that’s what several old acquaintances and most of the internet would have you believe. Ever since I began living openly as a transgender woman, people’s treatment of me has subtly changed. What do the politically correct brain police have against venerable man comedians like Jerry Seinfeld? Beloved funnyman of yesteryear Jerry Seinfeld (ask your parents!) 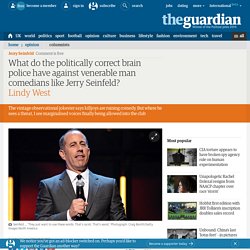 Took to the airwaves this week to offer his hoary wisdom on the state of modern comedy. A plague is upon us, he warns. Harmless jokesters and joy-bringers are literally being figuratively strangled by the long, thin goblin-fingers of “political correctness” (which is a fancy term for “not treating people who are already treated like garbage like garbage”), even though all they were trying to do was just say anything they want to, the way they always have, without ever being questioned or criticised by known killjoys such as “people of colour” and “women”, and with zero regard for the institutionally oppressed groups upon whose backs their industry has been stepping for generations in the service of shallow, straight white dude “catharsis”.

A Writer From The Onion Totally Destroys Patton Oswalt in. Did Trevor Noah and Lena Dunham’s jokes offend Jewish people? It depends. Trevor Noah, the new host of the Daily Show, caused a real shanda on Monday after tweets emerged from several years ago that contained eyebrow-raising jokes about Jewish people and women. 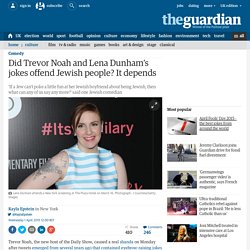 Last week, Lena Dunham faced a controversy of her own when she published a Shouts & Murmurs column in the New Yorker satirically comparing her Jewish boyfriend to her dog. Much debate has ensued about whether or not this humor was offensive to Jews. Newyorker. The comedian Sarah Silverman exerts a kind of mesmeric control over an audience. She doesn’t laugh at her own jokes, and when she smiles it is deliberately inappropriate. The expression that lingers on her face is usually one of tentative confusion or of chipper self-satisfaction, as if she had finished her homework and cleaned up her room, and were waiting for a gold star. Comic Liz Miele invents three new “feminist sex positions” And they’re just… Just watch. What everyone gets wrong about Charlie Hebdo and racism. Over the past week, millions of people who had never heard of French magazine Charlie Hebdo have come into contact with its controversial covers and cartoons. In the Wake of Charlie Hebdo, Free Speech Does Not Mean Freedom From Criticism.

On Wednesday morning, the French satirical paper Charlie Hebdo was attacked by three masked gunmen, armed with kalashnikovs, who stormed the building and killed ten of its staff and two police officers. The gunmen are currently understood to be Muslim extremists. This attack came minutes after the paper tweeted this drawing of ISIS leader Abu Bakr Al-Baghdadi. The Punchline. It took a comedian to call Bill Cosby to account. Ukip is fair game for comedians – and why shouldn’t it be? It has been genuinely amusing to watch Nigel Farage rail against the “lefties” of television panel shows.

Tim Minchin: The satirist who ran out of upwards to punch. Ricky Gervais Broke My Heart. How John Oliver and HBO Shattered TV’s Comedy-News Format. Dean's Assorted Thoughts: Privilege, humour and "good faith": How to avoid telling offensive jokes. How to tell jokes like a pro. ‘They accuse you of being divisive’: an interview with Aamer Rahman. Mary Beard: humour in ancient Rome was a matter of life and death. The Science of Humor and the Humor of Science: A Brilliant 1969 Reflection on Laughter as Self-Defense Against Automation.

The Humor Code — www.slate.com. The Humor Code — www.slate.com. #CancelColbert activist Suey Park: “This is not reform, this is revolution” Jon Stewart cursed me out: I dared question a “Daily Show” warm-up comic’s racist jokes. Frankie Boyle letter about BBC in full. Germany asks: is it OK to laugh at Hitler? What Just Happened On My Twitter Feed? Lindy West And Roseanne Go Toe To Toe Over Rape Jokes. Homer Simpson isn't a positive role model for kids? Eat my shorts…