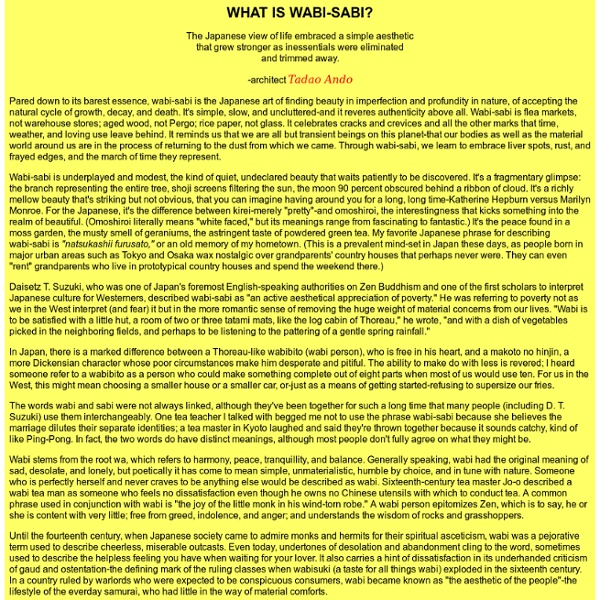 The Japanese view of life embraced a simple aesthetic that grew stronger as inessentials were eliminatedand trimmed away. -architect Tadao Ando Pared down to its barest essence, wabi-sabi is the Japanese art of finding beauty in imperfection and profundity in nature, of accepting the natural cycle of growth, decay, and death. It's simple, slow, and uncluttered-and it reveres authenticity above all. Wabi-sabi is flea markets, not warehouse stores; aged wood, not Pergo; rice paper, not glass. Wabi-sabi is underplayed and modest, the kind of quiet, undeclared beauty that waits patiently to be discovered. Daisetz T. In Japan, there is a marked difference between a Thoreau-like wabibito (wabi person), who is free in his heart, and a makoto no hinjin, a more Dickensian character whose poor circumstances make him desperate and pitiful. The words wabi and sabi were not always linked, although they've been together for such a long time that many people (including D. Cleanliness implies respect. Related:  new docs

Wiki definition A Japanese tea house which reflects the wabi-sabi aesthetic in Kenroku-en (兼六園) Garden Wabi-sabi (侘寂?) represents a comprehensive Japanese world view or aesthetic centered on the acceptance of transience and imperfection. The aesthetic is sometimes described as one of beauty that is "imperfect, impermanent, and incomplete".[1] It is a concept derived from the Buddhist teaching of the three marks of existence (三法印, sanbōin?), specifically impermanence (無常, mujō?), the other two being suffering (苦, ku?) Description[edit] "Wabi-sabi is the most conspicuous and characteristic feature of traditional Japanese beauty and it occupies roughly the same position in the Japanese pantheon of aesthetic values as do the Greek ideals of beauty and perfection in the West".[1] "If an object or expression can bring about, within us, a sense of serene melancholy and a spiritual longing, then that object could be said to be wabi-sabi The words wabi and sabi do not translate easily. Western use[edit]

Ayurveda - Basis For Ayurvedic Philosophy Vata is a force conceptually made up of elements ether and air. The proportions of ether and air determine how active Vata is. The amount of ether (space) affects the ability of the air to gain momentum. If unrestricted, as in ocean, air can gain momentum and become forceful such as a hurricane. Vata means "wind, to move, flow, direct the processes of, or command." Vata governs breathing, blinking of the eyelids, movements in the muscles and tissues, pulsations in the heart, all expansion and contraction, the movements of cytoplasm and the cell membranes, and the movement of the single impulses in nerve cells. The effect of Vata on our body or microcosm is described in the table below. See Also: Characteristics of Vata Types Signs of Vata Dosha Imbalance General Tips on Health and Wellness For Vata Types A Food Plan to Balance Vata Dosha Pitta is a force created by the dynamic interplay of water and fire. The effect of Pitta on our body or microcosm is shown in the table below.

Wabi sabi - Learning to See the Invisible What is wabi sabi? Ask a Japanese this question and there will likely be a long silence. Pose the same question to an American, however, the answer will often be quick and sure: "It’s beauty of things imperfect!" "Translation," wrote Kakuzo Okakura, author of the classic The Book of Tea, "can at best be only the reverse side of a brocade, - all the threads are there, but not the subtlety of color or design." The term wabi sabi is derived from two characters shared by Japanese and Chinese.

LifeEdited Given both the small footprint of the existing apartment and the quite high number of desired functions that should be fitted inside of it, we thought the most logical solution would be to draw a line between the convertible and non-convertible areas. So for the starting point of the concept, we decided that the best configuration of the apartment would have the wet and non-convertible areas (the kitchen and the bathroom) positioned next to the eastern wall facing the building's private courtyard, using the rest as the convertible area ,a confortable sized open space, receiving natural light from all four windows and meeting all the owners needs ,by transforming itself. The main area of the apartment is a convertible room,by using smart space saving furniture systems, combined with the mobility of the modular piece on the entrance wall. Also there is a thinbike slot behind the folding dining table that can be accesed from the entrance area.

Meditation in Devon & Cornwall Wabi Sabi - a Japanese Cultural Aesthetic BLU Collage, 2003 Wabi Sabi, an aesthetic concept intimately related to Japan and Zen Buddhism, is a way of perceiving things. "...the Japanese cultural source of this law of continual, cyclical evolution and decay parallels the British cultural mood of determination, stubbornness and pride which mandates a belief in improvement during times of hardship." (1) Wabi Sabi is a aesthetic concept intimately related to Japan and Zen Buddhism. However, it is not a "style of art" but rather a way of perceiving things, a very refined culture of things imperfect, impermanent and incomplete that expresses itself in great freedom of form, sublime colors, and a simplicity. Things of wabi-sabi nature are understated and unassuming, yet they do have presence and quiet authority and describe the transience and solitude of existence, an existential loneliness and tender sadness, in short: the essence of Zen. Historically: "Sen no Rikyu desired to learn The Way of Tea. Personally: Book on Wabi Sabi Links:

Soul Freedom What will the process do for me? Soul Freedom Therapy uses a remarkably powerful, yet simple process that people from all walks of life are now experiencing in order to free themselves permanently from emotional issues, painful relationship dynamics, negative life patterns and unresourceful belief patterns. Physical pain can be permanently cleared and many illnesses respond amazingly to this process. The gentle yet profoundly healing Soul Freedom Process gets to the very core of your issue. This powerful process gives remarkably profound and lasting results. You can finally free yourself from emotional issues like sadness, inner loneliness, anger, anxiety, fear, guilt, and grief…and much more Lack of confidence, self-worth issues and depression can be permanently cleared so that they disappear once and for all Painful relationship dynamics can be understood, resolved and healed Problems around lack of purpose, feeling blocked or life not flowing just dissolve and disappear C.

The Wabi-Sabi Aesthetic When I was in school, I fell in love with the same girl twice. Her name was Frances, and she looked something like Hillary Duff, only with short hair, less eye makeup, and more class. I’m not sure she ever knew I existed. I developed a massive crush on her in eighth grade, followed her around the halls between classes ("She takes English! She must really be smart!"), and never, ever told my friends about her. Some time during the year, she disappeared — moved away, dad relocated, I didn’t know — and that was it for that, I thought. In my eleventh grade year, she reappeared, and I fell for her again — not realizing it was the same girl I had such a crush on three years before. The thing I remember best about her was her radiant and engaging smile. So, in a sense, this article is all about Frances’s chipped tooth. Wabi-Sabi: Defining the Indefinable Does this idea fall under the rubric of wabi-sabi? "Sen no Rikyu desired to learn The Way of Tea and so visited the Tea Master, Takeno Joo.

Cleopatra was a Redhead: A History of Hair | Beautiful in Theory Thanks to a conversation with fellow blogger Vivienne of Bluestocking Blue (on this post), I have been doing some research. Vivienne asked about the beauty politics of hair: what is it about long hair that makes it central to our ideas of beauty, and what roles do gender and economics play in this? Good question. Artwork by Jamie Fales (noosed-kitty.blogspot.co.uk) To start with, we could ask the Bible. “I want you to understand that the head of every man is Christ, the head of the woman is the man, and the head of Christ is God. 4 Every man praying or prophesying with anything down over his head dishonours his head, 5 but every woman praying or prophesying with her head uncovered dishonours her head – it is the same as if her head were shaven. 6 For if a woman will not be covered, then let her be shorn! So there’s that. So hair is related to sex. My first thought is that while there must be truth in this, it’s also true that women have always worked physically – just not all of them.