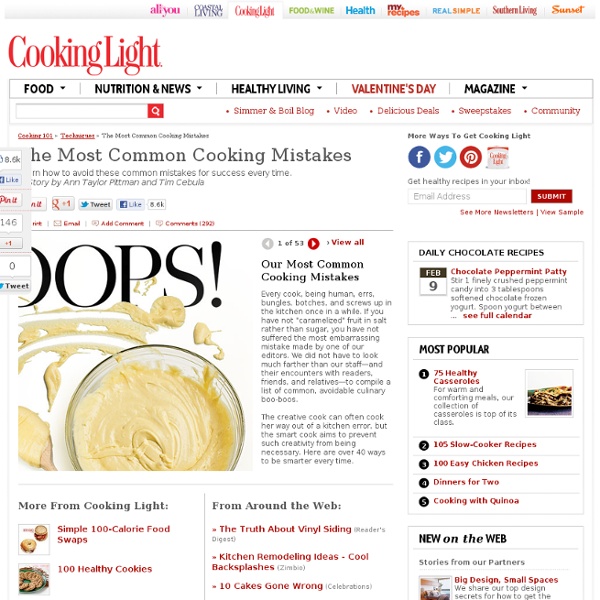 Every cook, being human, errs, bungles, botches, and screws up in the kitchen once in a while. If you have not "caramelized" fruit in salt rather than sugar, you have not suffered the most embarrassing mistake made by one of our editors. We did not have to look much farther than our staff―and their encounters with readers, friends, and relatives―to compile a list of common, avoidable culinary boo-boos. The creative cook can often cook her way out of a kitchen error, but the smart cook aims to prevent such creativity from being necessary. Here are over 50 ways to be smarter every time. Buy the Book: Cooking Light Oops!

Buffalo Wild Wings Recipes I’m more of a classic buffalo sauce(Frank’s, butter, and vinegar) man myself, but I had these recipes for my favorite wings at Buffalo Wings Wings, so I thought I would share. Some of these may seem a little labor intensive, but they definitely taste a lot better with fresh ingredients. Enjoy. updated: November 21st, 2009 Frozen Banana-Peanut Butter-Chocolate Chip Milkshakes You may have heard about one-ingredient ice cream, one of our all-time most popular recipes here at The Kitchn. It's a marvelous trick of a treat, made from frozen bananas that have been whipped furiously into a smooth, dreamy dessert. And yes, it tastes (and scoops) just like soft-serve ice cream. Well, the same science applies to milkshakes, and it led us to this: a thick, creamy, chip-studded shake that's lighter than our usual milkshake indulgences, being entirely ice cream-free (i.e. OK for breakfast).

Confessions 2012 Las Vegas, NV Interactive gallery installation in The Cosmopolitan that invites people to anonymously share their confessions and see the confessions of the people around them in the heart of the Las Vegas strip. Amidst casinos, restaurants and bars, Chang invited passersby to write confessions on wooden plaques in the privacy of confession booths. Chang arranged the anonymous plaques on the gallery walls like a Shinto shrine prayer wall, painted select responses on 4’x4’ canvases, and orchestrated the space with an original score by Oliver Blank. How to tie the Monkey's Fist Uses: The Monkey's Fist (ABOK # 2200 - 3, p 354) is used both as a decorative knot and to weight the end of a heaving line (see caution below). Tying it: The Monkey's Fist is usually tied around separated fingers. For the demonstration, a U-shaped piece of metal strip was used instead and three turns of rope were used in each direction. After each set of complete turns, change direction by passing the end through the middle.

Essential Egg Techniques Skip to main content Recipes Enlarge Credit: Penny De Los Santos Eggs are the quintessential brunch food. Whether scrambled, poached, fried, or gently folded into an omelet, they're the ideal Sunday morning food, preferably served with a side of home fries and some crispy bacon. If you're ambitious about your breakfast, you can cure your own bacon, but even the most hands-off cooks can master the art of properly cooking an egg. Just click through these easy to follow slideshows from our test kitchen, and you'll be flipping omelets with the best of them in no time.How to cook soft boiled eggs »How to make fluffier omelets »How to cook the perfect sunny-side up egg »How to create delicious scrambled eggs »A helpful trick for peeling hard boiled eggs »The very best way to crack eggs »

McDonalds Menu Items Around The World (Part 2, 32 pics) It’s an incredibly slow Food Network news day, so let’s pass the time until Sandra Lee does something stupid by gawking at McDonalds foods from around the world! Here’s a sampling of menu items that aren’t available in the United States: In Asia, you can pick up an icon sandwich, which is a chicken breast smothered with 2 different kinds of melted cheeses, bacon, and lettuce. This is the shaka-shaka chicken. You choose a powder mixture flavor, dump it into the bag with your chicken patty, seal the bag, and shake it up. - StumbleUpon How do you make bread even better? You stuff it with pepperoni and cheese. Then, you bake it in a bundt pan that allows you to pull off little chunks and dip them in pizza sauce. This is the perfect thing to bring to a party (and I did, where it disappeared quickly!)

A free school under a bridge in India Altaf Qadri / AP Founder of a free school for slum children Rajesh Kumar Sharma, second from right, and Laxmi Chandra, right, write on black boards, painted on a building wall, at a free school run under a metro bridge in New Delhi, India. At least 30 children living in the nearby slums have been receiving free education from this school for the last three years. Related content: 25 Habits of Highly Effective Hikers Backpacker Magazine – August 2008 by: Michael Lanza, Illustrations by Colin Hayes Some people just have more fun. They get out every weekend, enjoy extraordinary summer adventures, and they make it all seem so easy. Their secret? They've made backpacking routine. How to Make Homemade Beef Jerky Beef jerky can be a nearly perfect snack nutritionally but it’s expensive and making your own requires special equipment like a dehydrator. Until now. We show you how to get great tasting beef jerky with the stuff you’ve already got in your kitchen. Growing up in Central Pennsylvania, I’m no stranger to homemade jerky.

How to Make Proper Barbecue Chicken There's a lot of misconception when it comes to "barbecue." The problem is the word itself. It's used as a synonym for grilling, refers to the grill itself, or to the meat being grilled; it also has a sauce named after it; and sometimes it's just the word for the party itself held outdoors in somebody's backyard. Dragon's Kitchen: Witch's Broomstick Cookies Witch's Broomstick CookiesAdapted from Betty Crocker It's that time of year again...time for ghosts and ghouls and monsters to walk among us. That's right, darlings, it's Halloween!

Alex Russell Flint Madeline von Foerster by okmarzo April 21, 2014 Our Simple DIY Home Solar Power System Bringing some of the benefits of electrical power to our off-grid home has been a hit-or-miss affair. Over the years we’ve tried some very simple approaches to lighting and small battery recharging for our flashlights, such as hauling a 12 volt car battery to a small rural school about a half mile away every time it needed to be topped up. This was time consuming and inefficient. But we didn’t want to lose the feel of our simple home by bringing in a large generator and the jugs of gas needed to run it, and the prospect of setting up a wind turbine or solar array seemed expensive and a technological eyesore in a natural setting.