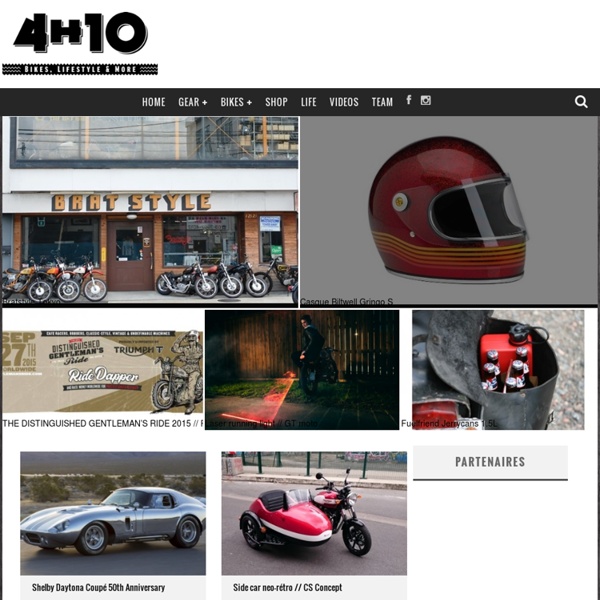 Handcraft and motorcycle equipment - Sankakel mcbess Claymore Jackets Vintage Racers Luis Moto: A BMW R nineT scrambler, Italian Style If rumors of BMW’s new R nineT-based scrambler have you foaming at the mouth, but you’re the impatient type—Luis Bertelli has the answer. He’s reworked the R nineT into a modern replica of the quintessential BMW scrambler, the R80G/S Paris Dakar. And he’s done it in spectacular fashion; if we were sitting in Munich right now, we’d be taking notes. Luis operates as Luis Moto out of Pisa, Italy, where he customizes bikes and sells custom parts. So everything you see here is (or will soon be) available on his online store. That’s good news if you’ve got an R nineT in the garage—and a soft spot for old dirt-biased boxers. G/S aficionados will immediately spot the R nineT’s more obvious Paris Dakar-inspired cues: like the red seat, black knee indents and tank graphics. But Luis’ mods go beyond just a few splashes of color. The aluminum front fender and brace are new too, and will be available unpainted or polished. Aside from a new paint job, the R nineT fuel tank has been left alone.

November | 2013 | Motorcycle Memories One of the things that came up in the recent BBC Timeshift documentary was the similarity of ‘The Black Leather Jacket’ to military clothing of the second world war. The silhouette, cut and fit of the Ton Up Boy’ favourite is identical to the jackets worn by German tank crews, albeit the military garment wasn’t always black, nor was it made of leather. Put aside for a moment the fact that these dashing young chaps were intent on blowing up Tommy and have a look at what they’re wearing. The illustrations below show the garment a little more clearly. Below is the typical Lewis Leathers jacket of the period. I’ve been thinking about the way the clothing of the period changed over time, not least due to the change from buttons to zips. One thing I look at is the way motorcycle clothing develops before and after the war. At the same time, motorcycle racers were also wearing rather larger double breasted leather jackets which buttoned to one side. Check out this jacket he makes!

How To Build A Scrambler You’ve searched the web, watched the moody videos, and discovered that your street tires don’t like wet grass. You’ve decided you need a scrambler—but how do you tweak your bike for good dirty fun, with a bit of extra style? Here we’ll focus on the best-value mods, balancing cost with performance. Your goal is a scrambler motorcycle that’s robust, easily repaired and built using materials that can proudly wear the scars of your adventures. The Speedtractor T-61 Catalina Special offers all the mods you need to hit the dirt and work up a sweat. Back in simpler times, scramblers started out as road bikes. For this discussion, let’s view the scrambler as the result of an approach: A mechanical embodiment of an adventurous spirit. Choosing your bike. Smaller bikes that make good contenders are the Yamaha SR400 and 500—minus their mysterious pressed-steel rear additions. Go back a few years and Japan’s parallel twins make for a cheap and cheerful base bike. The Starting Line. Rims and Rubber.

The ultimate Triumph Scrambler? The Scrambler is one of the most-loved Triumph motorcycles of recent times. But there’s a common criticism: its off-road performance doesn’t quite match those beguiling looks. That shortfall has just been blown to smithereens by a team of five motorcycle engineers. And not just any engineers: they’re all part of Triumph’s own chassis development team, based in Spain and led by brothers David and Felipe Lopez. Since 2001, these guys have overseen the development testing of every new Triumph model—so you can guarantee that this custom Scrambler can walk the talk. The bike is called Tramontana, after a northerly wind that blows over the Pyrenees on the border of France and Spain. “During the development of the original Scrambler—launched in 2006—the aim was on-road performance, with the capability for very light off-road riding,” says Lopez. A couple of years later, Lopez and his crew handled the development of the Tiger 800XC. It took an extraordinary four years of after-hours work.