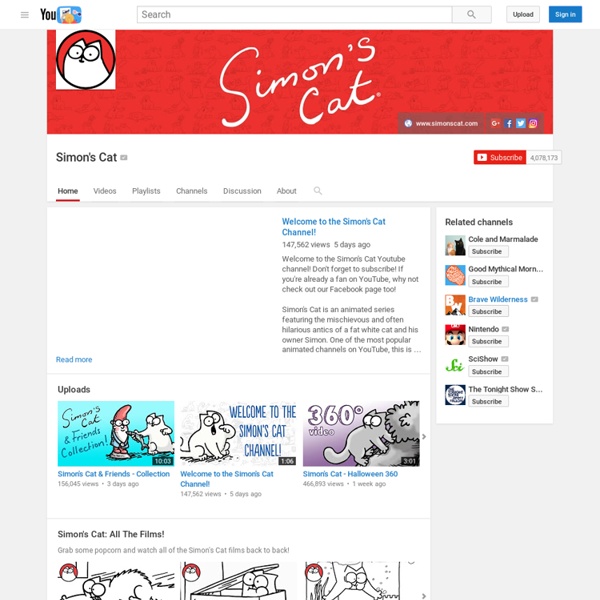 Welcome to the Simon's Cat Youtube channel! Don't forget to subscribe! If you're already a fan on YouTube, why not check out our Facebook page too! Simon's Cat is an animated series featuring the mischievous and often hilarious antics of a fat white cat and his owner Simon. One of the most popular animated channels on YouTube, this is definitely a channel to subscribe to! The channel includes:Simon's Cat Films - Short, funny animations that observe life as a cat owner.Simon's Cat Logic - A fun and informative series that looks at why cats do the silly things they do, and what we can do to help them live happy and healthy lives.Simon's Cat 'How To': Tutorials on how to draw and animate in Simon's Cat style.Simon's Cat: Behind the Scenes: Sneak peek into the work we do. Have you visited the official Simon's Cat website? Stay connected with Simon's Cat on your favourite websites:Facebook: Want to see more of our Black & White films? Want to know more about the history of Simon's Cat? FAQs: Q.

Was It Something I Said? - C4 Panel Show Words, wonderful, words... David Mitchell hosts this Channel 4 panel show. Two teams, captained by Micky Flanagan and Richard Ayoade, are pitted against each other in a battle of wordplay; answering questions based on sources including quotations, tweets and autobiographies, as well as some of the teams' very own one-liners to test their verbiage mettle.

ELT Blog Carnival – Teaching and Learning with Video » Vicki Hollett The blogosphere is EXPLODING with cool ideas for using videos to teach English and here you’ll find links to some of the very best – . If I have spelt anyone’s name wrongly or given a wrong link, or even worse, failed to include an entry – Argh!!! – please let me know so I can put it right! ‘Why use video?’ you may ask. Would I Lie To You? - BBC1 Panel Show Would I Lie To You? is a BBC One panel show originally hosted by Angus Deayton and now hosted by Rob Brydon. Team captains David Mitchell and Lee Mack, with the help of two guests each, must hoodwink each other into believing that what is fake is true, and what is true is not. The aim of the game is to fool the opposition into mistaking fact for fiction and fiction for fact.

Watch La Linea, the Popular 1970s Italian Animations Drawn with a Single Line Simplicity is not the goal. It is the by-product of a good idea and modest expectations. Thus spake designer Paul Rand, a man who knew something about making an impression, having created iconic logos for such immediately recognizable brands as ABC, IBM, and UPS. An example of Rand’s observation, La Linea, aka Mr.

Have I Got News For You - BBC1 / BBC2 Panel Show Our Review: Have I Got News For You is arguably Britain's most popular topical panel game. The series has many different qualities. On the one hand, there is Merton's surrealism and his ability to improvise on a wide range of different subjects. On the other hand, there is Hislop's undeniable in-depth knowledge of politics and political scandals - this combination of skills and experience ensures 30 minutes are filled with laughter. When Deayton was forced out mid-way through Series 24 due to his own personal scandal (many fans still feel forcing Deayton to quit was a mistake), the future of Have I Got News For You was very much in doubt.

America's Funniest Home Videos America's Funniest Home Videos has teamed up with YouTube sensation Shay Carl to bring you an all new show! Don't miss new episodes on Youtube.com/Shaytards every Sunday starting October 19th! QI - BBC2 / BBC1 Panel Show Our Review: Quite interesting. QI is one of those rare shows which proves not all TV is dumbing down. The programme provides you with extensive knowledge of things you never knew existed, and corrects knowledge that you always believed to be true.

Film in Action Until quite recently it was difficult to find pedagogically sound film material to help students improve their language through watching film, and teachers had to spend many hours creating their own materials. However, with the advent of the Internet there are now a wealth of online resources for both language teachers and their students. With so many resources it’s sometimes difficult for teachers to see the wood for the trees. Here I’m going to recommend the sites and resources that from my own experience I have found most useful and engaging. adam hills Well, the last regular show of Mess Around was one to remember – for many reasons. After doing my usual faffing about with the crowd, I stumbled upon a young couple who looked very much in love. His name was Alexander, and he had traveled eight hours from John-O-Groats to be with his girlfriend. It was your classic love story – a psychology and history student working as a barmaid, courted by a Royal Tour Guide of the Castle Mays (I think that’s what he said) Compared to the couple of thirty years alongside them, it was like a before and after shot Meanwhile two guys in the front row provided a slightly different before and after shot

Using video content effectively in your EFL classroom Ten years ago today, the first YouTube upload was made live on the platform. Entitled ‘Me at the zoo’, it was uploaded by one of the platform’s co-founders, Jared Karim, and can still be seen on the site today. With over 19 million views on this video alone, and users in excess of 1 billion, YouTube and the influence of video content on our lives is undeniable. I'm Sorry I Haven't A Clue - Radio 4 Panel Show Our Review: ISIHAC is one of Britain's most loved radio shows. It is amongst the handful of legendary British audio comedy formats, listened to around the world. The show has won several awards and attracted many fans; it is easily one of the most popular programmes on BBC Radio 4 (even repeats bring large ratings). The programme is considered so good, that some of its more famous fans do not want to appear on it for fear of spoiling it; amongst them Armando Iannucci. Following the death of host Humphrey Lyttelton in 2008 there was a big question mark over whether the show would return.

carnovsky RGB Color est e pluribus unus RGB is a work about the exploration of the “surface’s deepness”. RGB designs create surfaces that mutate and interact with different chromatic stimulus. Carnovsky's RGB is an ongoing project that experiments with the interaction between printed and light colours. The resulting images are unexpected and disorienting. The colors mix up, the lines and shapes entwine becoming oneiric and not completely clear. Comedy Central UK and Ireland Series 4 - Utter Shambles (Extended) Can Robin and Josie stick to a theme this time around? Let's find out... (WARNING: these podcasts contain very bad language.) Series 3 - Utter Shambles - Part 2

The movements and behaviour of Simon the cat are so realistic it's almost scary. As a cat owner I can totally relate to this. A very fun animated comic I recommend to anybody. by tammster Oct 17