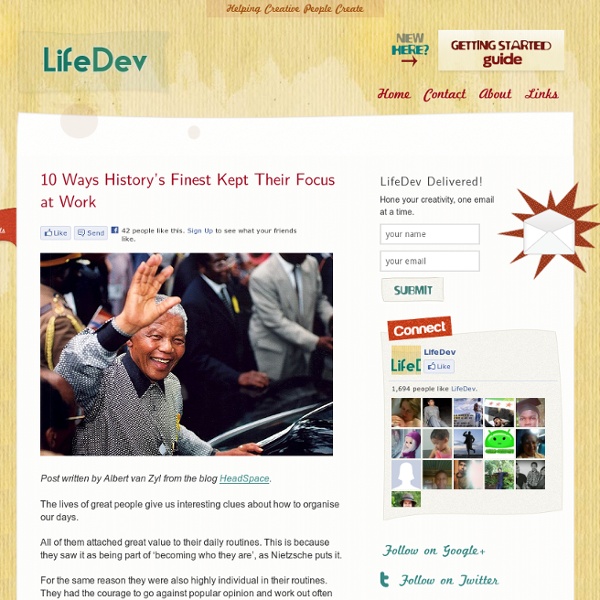 Post written by Albert van Zyl from the blog HeadSpace. The lives of great people give us interesting clues about how to organise our days. All of them attached great value to their daily routines. This is because they saw it as being part of ‘becoming who they are’, as Nietzsche puts it. For the same reason they were also highly individual in their routines. They had the courage to go against popular opinion and work out often strange daily plans that suited them. This is perhaps the first lesson that we can learn – that it takes courage and resolve to design and stick to a routine that suits you. There are at least 10 other lessons that the daily routines of the great can teach us: 1. Despite the modern obsession with physical presence at offices (also known as ‘presenteeism’), very few of the great worked long hours. Philosopher Michel Foucault would only work from 9am to 3pm. 2. Even during these short days, the great took plenty of breaks. 3. 4. 5. 6. 7. 8. 9. 10. Mandela

How to Work Like the Masters Written by Jay of Dumb Little Man. When I need work done on my car, I consult with a mechanic. When it's time to build a deck in the backyard, I will search for an expert and listen to what he says. So when it comes to life itself, why wouldn't you at least consider what experts think? 7 Secrets of the Super Organized A few years ago, my life was a mess. So was my house, my desk, my mind. Then I learned, one by one, a few habits that got me completely organized. 13 Things to Avoid When Changing Habits “Habit is habit, and not to be flung out of the window by any man, but coaxed downstairs a step at a time.” - Mark Twain Post written by Leo Babauta. Follow me on Twitter. I’ve learned a lot about changing habits in the last 2 1/2 years, from quitting smoking to taking up running and GTD and vegetarianism and waking early and all that. I could go on, of course, but you get the picture. I’ve not only learned a lot about what you should do when changing habits, but through my failures, I’ve learned about what not to do.

10 simple ways to save yourself from messing up your life - Step Stop taking so much notice of how you feel. How you feel is how you feel. It’ll pass soon. What you’re thinking is what you’re thinking. It’ll go too. 3 Life-Changing Pieces of Advice: Rebeca Hwang When I was student at MIT, I learned an important lesson from one of my personal heroes, Amy Smith. She's a hero because she invented the "screenless hammer mill" when farmers in Senegal were struggling with the process of separating rocks from grains when making flour. Expensive screens broke all too easily and were hard to replace in poor remote rural villages. Her invention, which was recognized by the Lemelson-MIT Student Prize, looked at the existing problem at a new angle. Instead of screens, she used airflow to separate unground grain and rocks from flour.

Google Maps: 100+ Best Tools and Mashups Most people think of Google Maps in terms of finding a place or business, or getting directions from one point to another. Others use the satellite images and terrain mapping features. But there are tons of other uses out there for Google maps. Increase your productivity at work by letting go of negative men My alma mater is currently ranked number one in all of the college men’s basketball rankings. They’ve been in the top spot for 11 of the 14 weeks of the polls, and were number one in the preseason. There are five games left in the regular season, and all of the teams Kansas has left to play would love to see the Jayhawks lose. Colorado, Oklahoma, Oklahoma State, Kansas State, and Missouri fans aren’t the only ones who want to see Kansas mess up their record in the last five games. Fans of the other ranked teams would be happy to see Kansas take a tumble, and, after watching some of the games this year, I’m pretty certain there are a few referees that would be glad to see Kansas lose, too.

Forty Lesson Learned The Hard Way By Lee Silber One of Jimmy Buffett's best songs is "A Pirate Looks At Forty". It's about a friend of his (Jimmy insists he is NOT the pirate) who could not find his place or make his mark in the modern world. George Washington: Simplicity seeker by Erin Doland on Feb 15, 2010 Today is Presidents Day in the U.S., and over the past week I’ve been re-reading James Flexner’s Washington: The Indispensable Man in preparation. I’ve been fascinated by George Washington since I read his first inaugural address my junior year of high school. It was his desire not to be president that captivated me then and continues to interest me today. He wanted a simple retirement after the Revolution, not the responsibilities of leading a nation that his friends guilted him into doing. After serving out his two presidential terms, Washington was finally able to retire to his home at Mount Vernon and live at a more relaxed pace.

5 Unusual Ways to Become a Better Speaker You’ve been asked to speak at an important event. It’s a great opportunity and you should be thrilled—but since you rarely speak, especially in a formal setting, all you can think about is bombing. Unfortunately, captivating an audience is definitely a skill that takes years to develop and hone. Since you don’t have that kind of time, here are five unconventional ways to become a better speaker almost overnight: 1. 100 top sites for the year ahead: our latest selection finds that location-based services, work-anywhere collaboration and video are prominent The online world has changed dramatically even since we last drew up a list of 100 useful sites in December 2006. In the interim, there has been a revival of the browser wars - with Google's Chrome and Apple's Safari making surprising inroads into the Windows monopoly, and offering a new vision of what browsing can be like. Many of the sites listed here were not available when we did our last list; although longevity is a mark of pride online, it is difficult for companies set up in the 1990s to reinvent themselves quickly enough to take advantage of new technologies. Although of course rapid change brings casualties too: it's possible that with all the economic turbulence going on that some of the sites here won't be around in a year from now, or that their now free services will have become paid-for. That doesn't diminish their usefulness, though; it just underlines their determination to survive. Video, of course, is now everywhere.