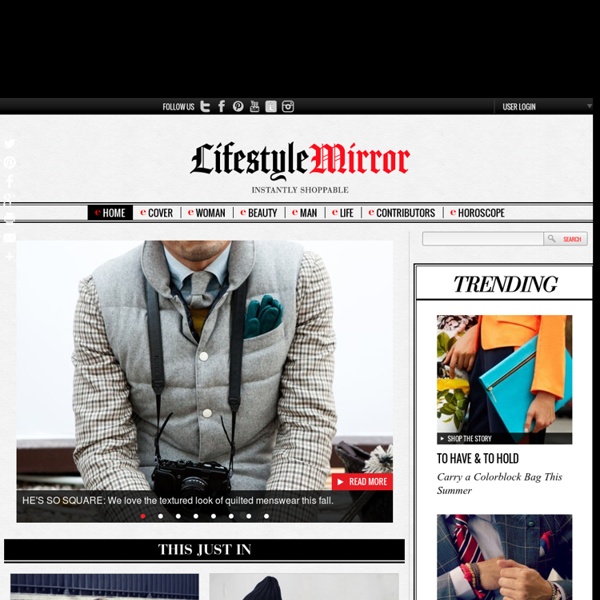 Culture Sign Up for Our Newsletters Loading... True Religion Jeans, J Brand, Current Elliott, Citizens of Humanity, Joie at Revolve Clothing What to Wear for Fall 2013 It’s been so long since we’ve slipped on boots or a fantastic wool coat that we might be a little out of practice getting into sync with dressing for the cold season. Luckily for you, we’ve put together the perfect guide to what to wear for fall—alphabetized by trend, no less. The fashion trends for fall range from understated evening to grownup grunge. So if you’re looking to make a statement this season, there’s no better way than sporting a piece of sheer clothing made popular by Burberry, Erdem, and Jonathan Saunders. DIY Braided Bead Bracelet It’s been awhile since our last bracelet DIY. I don’t know about you, but our wrists have been begging for another colorful addition for months now. So after playing with some materials that were already on hand, we’ve created a tutorial for a braided bead bracelet, which is a not so distant cousin of the hex nut and wrap bracelet.

El Huffington Post: última hora, noticias y opinión en español 时尚＋金融＋互联网 more than laundry: 09.2010 This Blog boho is the new military Emilio Pucci Spring 2011 above; Roberto Cavalli Spring 2011 below International Fashion Week Calendar Calendar of Fashion Shows May 2013 Cannes, France Rio de Janeiro, Brazil Arts Granny Takes a Trip Coordinates: One of the storefront facades of Granny Takes a Trip (photo credit: King's Road by Max Decharne[1]). Granny Takes a Trip was a boutique opened in February 1966 at 488 Kings Road, Chelsea, London, by Nigel Waymouth, his girlfriend Sheila Cohen and John Pearse.[2] The shop, which was acquired by Freddie Hornik in 1969, remained open until the mid-70s and has been called the "first psychedelic boutique in Groovy London of the 1960s".[3] The name has been appropriated by clothing stores around the world that are not connected with the original Granny Takes a Trip, including present-day vintage fashion stores in Hermosa Beach, California, Sunset Boulevard and Sydney, Australia. Opening[edit] The boutique was the brainchild of two young Londoners, Nigel Waymouth and Sheila Cohen, who were looking for an outlet for Cohen’s ever-increasing collection of antique clothes.

Dandie Fashions Dandie Fashions or sometimes Dandy Fashions was a London fashion boutique founded in 1966, following a chance encounter at the Speakeasy Club between Freddie Hornik and Alan Holston, who then got together with Australian John Crittle, the Guinness heir Tara Browne and Neil Winterbotham, and launched the new business.[1] Five months after opening their Apple Boutique in Baker Street (which ran from 7 December 1967 to 30 July 1968), the Beatles invested in Dandie, renaming it Apple Tailoring (Civil & Theatric). They were attracted to King's Road by the presence of the clothing boutiques Dandie, along with Granny Takes a Trip and Hung On You. Apple Tailoring opened at the same 161 King's Road premises as Dandie, on 23 May 1968. Neil Aspinall and Apple's accountant Stephen Maltz became directors.

Tampa designer gave Jimi Hendrix his wild style TAMPA — Jimi Hendrix, hailed by Rolling Stone magazine as the greatest guitarist of all time, was a lefty but played a right-handed instrument, sometimes behind his back or even with his teeth. But what also impressed Michael Braun was Hendrix’ ability to scribble a food order under the toughest of conditions. It was 1969. Braun was hanging with Hendrix and others in a Tampa hotel room after a concert, partaking in an activity — Braun said with a wink — that hampered their ability to function while giving them the munchies. They decided to send out for food.