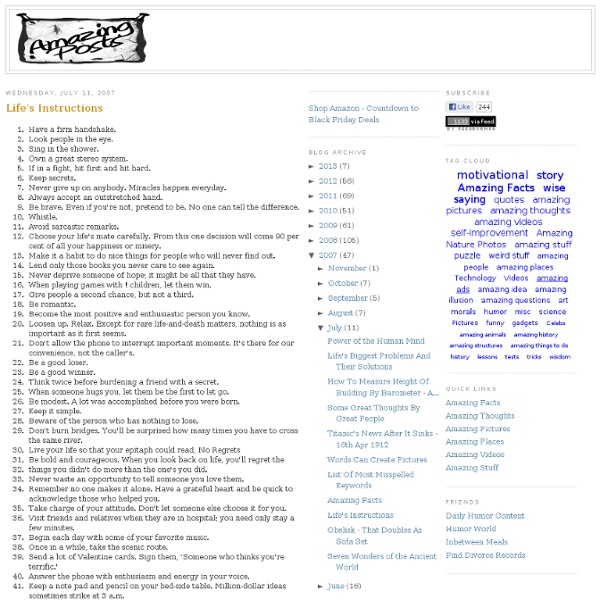 Life Life is a characteristic distinguishing objects having signaling and self-sustaining processes from those that do not,[1][2] either because such functions have ceased (death), or because they lack such functions and are classified as inanimate.[3][4] Biology is science concerned with the study of life. Though life is confirmed only on the Earth, many think that extraterrestrial life is not only plausible, but probable or inevitable.[15][16] Other planets and moons in the Solar System have been examined for evidence of having once supported simple life, and projects such as SETI have attempted to detect radio transmissions from possible alien civilizations. According to the panspermia hypothesis, microscopic life exists throughout the Universe, and is distributed by meteoroids, asteroids and planetoids.[17] Early theories Materialism

How to Become an Early Riser It is well to be up before daybreak, for such habits contribute to health, wealth, and wisdom. – Aristotle Are morning people born or made? In my case it was definitely made. In my early 20s, I rarely went to bed before midnight, and I’d almost always sleep in late. I usually didn’t start hitting my stride each day until late afternoon.

25 Acts of Body Language to Avoid Our body language exhibits far more information about how we feel than it is possible to articulate verbally. All of the physical gestures we make are subconsciously interpreted by others. This can work for or against us depending on the kind of body language we use. The Complete Guide to Suits: 57 Rules of Style Blazer ($1,595), pants ($295), and shirt ($295) by Burberry Prorsum. Tie ($130) by Band of Outsiders. Pocket square ($65 for three) by Brooks Brothers. Rule #1 We've said it before and we'll say it again: Fit is everything.

25 Napping Facts Every College Student Should Know Written By: Angelita Williams It's almost cruel the way adults ease children into life outside of the house. They got us on board with the whole going to school thing by letting us take naps in pre-school. The Salvia divinorum FAQ Level - 2 "A stands for ALTERED perception." Colors and textures are paid attention to. Appreciation of music may be enhanced. Space may appear of greater or lesser depth than is usual. But visions do not occur at this level. Thinking becomes less logical, and more playful; short term memory difficulties are may be noted.

How to find true friends (and love) in 45 minutes David Rowan Editor of Wired magazine This article was featured in Times Magazine, 5 November. 31 Quotes That Will Give You Chills I think quotes have a powerful way of conveying an attitude to you which sometimes resonates so much that you feel ‘chills’ inside. Here’s a list of the quotes which have given me the most of these “chills”. Enjoy! Some people die at 25 and aren’t buried until 75. —Benjamin FranklinMost people are other people.