Still figuring it out: Tavi Gevinson at TEDxTeen 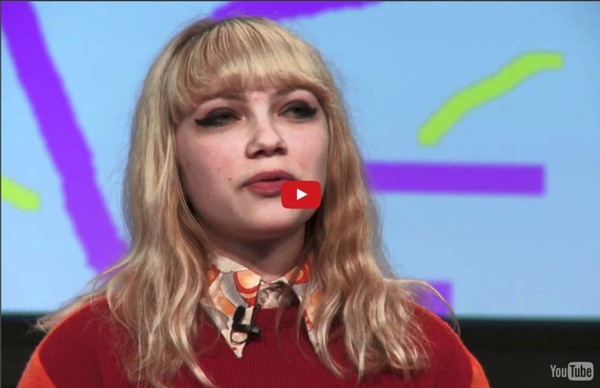 s Trend Briefing covering "7 Consumer Trends To Run With In 2014" Growing numbers of consumers can no longer escape an awareness of the damage done by their consumption: to the planet, society, or themselves. But a mixture of indulgence, addiction and conditioning mean that most can’t substantially change their consumption habits. The result? A never-ending guilt spiral. Which creates exciting opportunities for brands that combine tackling this guilt spiral with consumers’ endless status seeking (still the driving force behind all consumer behavior). Indeed, GUILT-FREE STATUS will be the ultimate indulgence in 2014. Known by all. Visibly guilt-free. Warning: this trend is NOT about GUILTWASHING. Tesla Guilt-free status symbol goes global The Tesla Model S sedan luxury electric vehicle began shipping to Norway, Switzerland and the Netherlands in August 2013, with right hand drive models scheduled for March 2014. Nudie Old jeans become limited edition rugs Liberty United Firearm jewelry fights gun violence (BBMG, GlobeScan and SustainAbility, October 2013)

Alan Watts - What do you desire? NOTCOT.ORG Blog | Pattern People | Surface Design + Inspiration Interiors | Pillow Talk It seems like these days the throw pillow craze has reached new heights. No longer are we looking for our couch decorations just to blend in and stay still, we have begun to ask our couch art to positively pulse with creativity. And that’s where artists like Tyler Spangler step in. His collection of vibrant and color flooded art prints are available as throw pillows on Society 6, in case your couch is looking a bit plain. – Julie Rose Color | Iridescent Melt Dominique Gaucher | Federico Kenis | Veronique Branquinho Sparkle and shine. Pattern Report | Big Cat Love Leopard prints cover every surface of these looks for summer 2014. - bekah hilleson Art | Shattered View via here. Photos of sunsets take on a new life when reflected through broken mirror in this series, Broken Mirror/Evening Sky by photographer Bing Wright. -Claudia Brown Profile | Amelia Graham Where do you look for inspiration? Architecture, art, science, and nature. Any design tips you’d like to share?

International Trend Interpretation Agency | Our-trends | Societal-trends Babyboomers are the biggest, wealthiest and most dominant generation. They are still very active, especially when compared to the generations before them. Kids start moving out, careers and working hours are toned down and self exploration is high. They have time, money and the network to optimally profit from their new free time. Boomers also spend a lot of time and effort in trying to stay healthy, by eating the right products and keeping up maintenance. This generation has always been able to adjust their lives the way they wanted to, and now they are trying to get their death aligned.

Crowd-funded Lego car powered by air 19 December 2013Last updated at 11:06 ET By Jane Wakefield Technology reporter A car made from Lego blocks and powered by compressed air An air-powered car built of Lego, that can reach a top speed of around 20km/h (12mph) has hit the roads of Melbourne. It was built by an Australian entrepreneur and a Romanian technologist who used more than 500,000 pieces of Lego to complete the car. The crowd-funded project began with a tweet asking people to invest in an "awesome" start-up. Four air-powered engines and 256 pistons, all built of Lego bricks, enable the car to move. Everything bar the wheels is made from Lego. The creators were worried about a large Lego explosion Co-founder Steve Sammartino told the BBC that he was "neither a car enthusiast nor a Lego enthusiast". "What I am is a technology enthusiast and I wanted to show what is possible when you crowd-fund an idea and use young talented people," he said. The engine is powered by air Continue reading the main story “Start Quote

INTO THE FASHION The wonderful super model Gia Carangi, here photographed by François Lamy for Vogue Italia in 1979, is wearing a Madras pattern dress designed by Valentino Garavani [left]. The pattern and making might have been an inspiration to Pierpaolo Piccioli and Maria Grazia Chiuri for FW2014||15 [right], since they are recurrent in various styles seen in this collection. BIP LING A beginner's guide to fashion trend forecasting with Geraldine Wharry - Inspired by... blog I recently interviewed fashion forecaster Geraldine Wharry who has worked with and for major brands including trend forecaster WGSN. I asked her about the art of trend forecasting, and what's next for 2013/14. Tell us a little bit about yourself…I've been a fashion designer for 13 years and have always had a strong eye for trends so I naturally evolved into trend forecasting when I moved to London after living in Los Angeles and New York. I was born, raised and studied fashion in Paris but my mother's a New Yorker and my father is British. Can you give us a summary of how trend forecasting works? Whilst gathering facts, at the root of it is also a personal intuition and an eye for what's next, that can't be taught or necessarily explained. That's also what defines the difference between short-term forecasting and long-term forecasting which are key in the business. What are the big trends for autumn winter 2013/14? Modern comfort: we focus here on the new relevance of protection.

The Sartorialist Sunday, January 25, 2015 Preview Cifonelli Fall/Winter 2015 My good friend John Vizzone working late before the Cifonelli Fashion Show. It’s great to see his modern American design sensibility leading one of Paris’s oldest tailoring houses. Saturday, January 24, 2015 The Place to Be: is at 2-1-3. It’s always a treat When our paths should meet Across the floor at Colette. Many a store Can cause such a bore, But with colette it is always a treat. The 25 most powerful people in fashion Fashion You've landed on our old Fashion site Visit our new Fashion or Beauty sites for the latest articles Paris Fashion Week 2016 High Street Hits Latest Fashion News Latest Beauty News Picture: Next The 25 most powerful people in fashion by

Designing 20% Time in Education A.J. Juliani is a co-founder of Education Is My Life. He currently is a K-12 Technology Staff Developer overseeing a 1:1 initiative. There is a movement happening in education right now. Yes, I said it, so let me repeat: Students are learning what they want in classrooms across the world. What is truly astounding is how interconnected this movement is with the social web. Right now (depending on who you are) there are three possible ways to deal with this type of news: 1. I’ve heard all three “viewpoints” since writing “20% Time (like Google) In My Class” last January. This article is meant to address the three points-of-view above. If you are a #1 above, this will give you the resources and connections to get started today. If you are a #2 above, this will explain how I currently have three teachers in my high school doing the project. If you are a #3 above, this will explain the research and methodology behind 20% Time in education. The “This is Awesome” Group 1. 2. 3. 4. 5. 1.