World War 2: Thousands of children sent to safety. Throughout the day thousands of boys and girls were sent by bus, tram, trolley bus, underground and on foot to the main-line railway terminal where they were entrained for the reception areas all over the country. 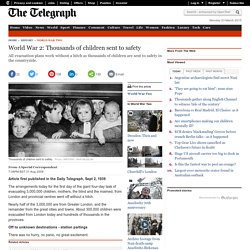 Until the trains reached their destinations neither the children nor the adults who accompanied them knew whither they had been bound. “Is there going to be a war?” A nine-year-old boy asked me at Waterloo in the morning. “I’ll give you two to one there won’t be – and I’ve got a tenner,” he added. At the stations parents snatched last kisses from their children, and peered longingly through the barriers as the trains full of confident children drew out. Labels and rations At 9a.m. Marshalled into groups of 50, and sub-divided into smaller groups of 10 each, under the charge of an adult , they moved off laughing and chattering to the control point for Waterloo Station – St John’s School, just across the Waterloo-road. “I’m looking after him” An adventure. Children of the wartime evacuation. In January 1941, Sheila Shear and her sister were evacuated from east London to the Chilterns and billeted with a bachelor called Harry Mayo. 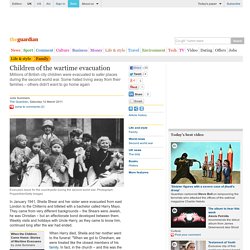 They came from very different backgrounds – the Shears were Jewish, he was Christian – but an affectionate bond developed between them. Weekly visits and holidays with Uncle Harry, as they came to know him, continued long after the war had ended. When Harry died, Sheila and her mother went to the funeral: "When we got to Chesham, we were treated like the closest members of his family. In fact, in the church – and this was the first Christian funeral my mother and I had ever been to – we were put to sit in the front row, in front of Uncle Harry's nieces and nephews. It was only then, I think, that I really appreciated how much our little family had meant to him – and had gone on meaning to him all his life.

"We returned to London in the knowledge that we would never go back to Chesham again. It was codenamed Operation Pied Piper. Two lives. Primary History - World War 2 - Evacuation. Operation Pied Piper: The Evacuation of English Children During World War II. One of the most, if not the most, emotionally wrenching decisions made by the British government during World War II was its decision to relocate its children out of urban centers to locations where the risk of bombing attacks was low or non-existent. 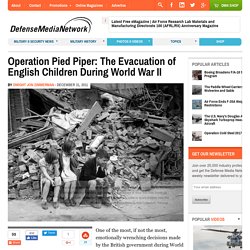 Called Operation Pied Piper, millions of people, most of them children, were shipped to rural areas in Britain as well as overseas to Canada, South Africa, Australia, New Zealand, and the United States. Almost 3 million people were evacuated during the first four days of the operation, making it the biggest and most concentrated population movement in British history. “I’ll take that one.”— Evacuee host parent Plans for such a move began during the summer of 1938, in which the country was divided into risk zones identified as “evacuation,” “neutral,” or reception” and lists of available housing were compiled. Children and World War Two. Children were massively affected by World War Two. 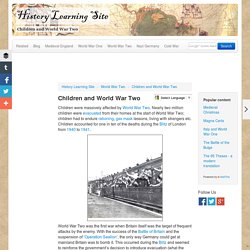 Nearly two million children were evacuated from their homes at the start of World War Two; children had to endure rationing, gas mask lessons, living with strangers etc. Children accounted for one in ten of the deaths during the Blitz of London from 1940 to 1941. World War Two was the first war when Britain itself was the target of frequent attacks by the enemy. With the success of the Battle of Britain and the suspension of ‘Operation Sealion’, the only way Germany could get at mainland Britain was to bomb it. This occurred during the Blitz and seemed to reinforce the government’s decision to introduce evacuation (what the government of the time described as “the biggest exodus since Moses”) at the start of the war.

The impact of evacuation on children depended to an extent on which social strata you were in at the time. ‘Operation Pied Piper’ was a huge undertaking.