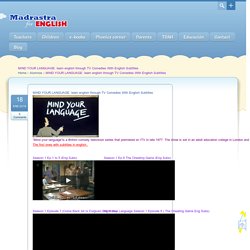 The first ones with subtitles in english. Season 1 Ep.1 to 5 (Eng Subs) Season 1 Episode 7 (Come Back All Is Forgiven Eng Subs) Season 1 Ep 6 The Cheating Game (Eng Subs) Mind Your Language Season 1 Episode 8 ( The Cheating Game Eng Subs) Some chapters of the rest seasons are subtitled and some others are not. Learn English through comedy (Top Notch TV) Mr. Bean - 25th Anniversary - Mr Bean Drives His Mini Again! Mr Bean At The Olympics 2012 Opening. Mr Bean At The Olympics 2012 Opening You are going to watch a Mr Bean videopractise Present Continuous Watch Watch the video What is Mr bean doing? 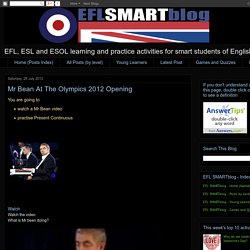 Mr.Bean At 2012 Olympics Opening Ceremonypor videobash Practise Do the gap-fill exercise Speak Look at the photos. Using Humor in the Classroom. “But why do I have to go? School is not fun!” That quote is from a first-grade child, asking his mom why he has to go every single day to this place that he was told was going to be a lot of fun, but has not lived up to the hype. If he could articulate further, he might say, "I am only six. I like to have fun, but school is not fun and from what I can tell, it's going to get worse every year, not better. " This is not an April Fool's Day anecdote; it's all too real. Confused? I asked Ed how humor can be fit in when teachers have so much to cover in their classes. "But most of all, it brings a sense of pleasure and appreciation and creates a common, positive emotional experience that the students share with each other and the teacher. " A night to remember (New Headway) Video Lesson: Mr. Bean. 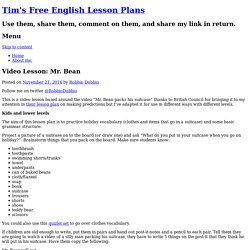 Bean packs his suitcase” thanks to British Council for bringing it to my attention in their lesson plan on making predictions but I’ve adapted it for use in different ways with different levels. Kids and lower levels The aim of this lesson plan is to practice holiday vocabulary (clothes and items that go in a suitcase) and some basic grammar structure. Project a picture of a suitcase on to the board (or draw one) and ask “What do you put in your suitcase when you go on holiday?”

Toothbrushtoothpasteswimming shorts/trunkstowelunderpantscan of baked beanscloth/flannelsoapbooksuitcasetrousersshortsshoesteddy bearscissors You could also use this quizlet set to go over clothes vocabulary. If children are old enough to write, put them in pairs and hand out post-it-notes and a pencil to each pair. Mr. In his suitcase. Then stick all the post-its on the board and show the video. Higher levels – video dictations.

Learn English with jokes in three levels. Using Humor in the Classroom. 10 English jokes to make learning English fun. Laughter is the best medicine Jokes are an essential part of any language and culture and are a great way of understanding the target language through the play on words and a culture’s sense of humour. 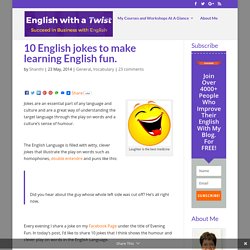 The English Language is filled with witty, clever jokes that illustrate the play on words such as homophones, double entendre and puns like this: Did you hear about the guy whose whole left side was cut off? He’s all right now. Every evening I share a joke on my Facebook Page under the title of Evening Fun. “I’m not sure that’s what they mean by now reduce the wine” 1. 2. Humour around the world. Funny. 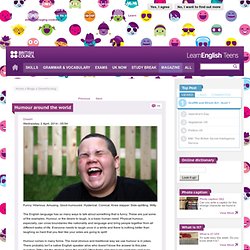 Hilarious. Amusing. Good-humoured. Hysterical. Comical. What’s So Funny? – How To Use Jokes in the English Language Class. I’m delighted to introduce you to yet another member of the Gallery Teachers Team, Andy Martin. 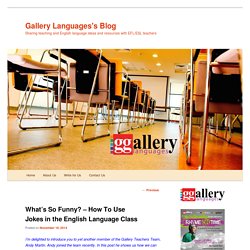 Andy joined the team recently. In this post he shows us how we can use jokes in our classroom to make the language learning experience even more enjoyable. Over to you, Andy. Comedy Crashers: Humor As An Assessment Tool. Humor as a high form of seriousness: Playing with possibility. 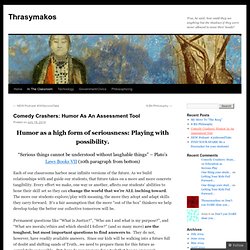 “Serious things cannot be understood without laughable things” – Plato’s Laws Books VII (10th paragraph from bottom) Each of our classrooms harbor near infinite versions of the future. As we build relationships with and guide our students, that future takes on a more and more concrete tangibility. Every effort we make, one way or another, affects our students’ abilities to hone their skill set so they can change the world that we’re ALL inching toward.

The more our students explore/play with meaning, the more they adopt and adapt skills they carry forward. Using ‘COMEDY FOR ELT’ Clips. This is a guest blog written by Nick Michelioudakis and it will be included as part of the August ELT Blog carnival on humor. 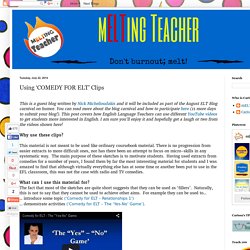