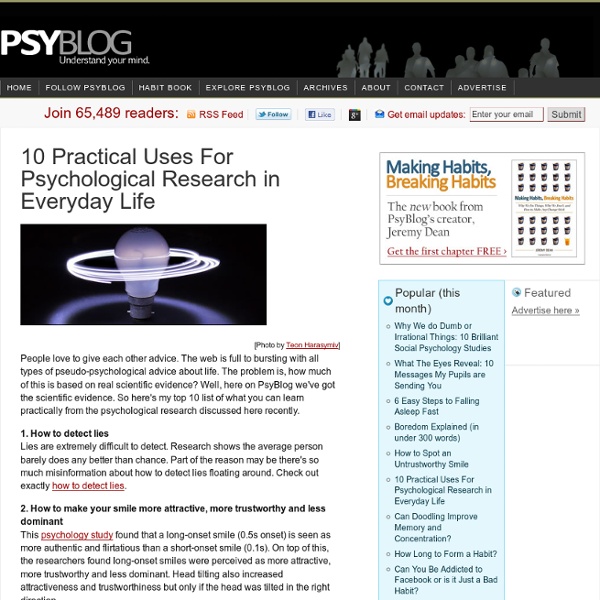 People love to give each other advice. The web is full to bursting with all types of pseudo-psychological advice about life. The problem is, how much of this is based on real scientific evidence? Well, here on PsyBlog we’ve got the scientific evidence. So here’s my top 10 list of what you can learn practically from the psychological research discussed here recently. 1. 2. 3. 4. 5. 6. 7. 8. 9. 10.

ISFJ This article is about the Myers-Briggs personality type. For the Socionics ISFj, see Ethical Sensory Introvert. ISFJ (Introversion, Sensing, Feeling, Judging) is an abbreviation used in the publications of the Myers-Briggs Type Indicator (MBTI) to refer to one of sixteen personality types.[1] The MBTI assessment was developed from the work of prominent psychiatrist Carl G. The Ten Most Revealing Psych Experiments Psychology is the study of the human mind and mental processes in relation to human behaviors - human nature. Due to its subject matter, psychology is not considered a 'hard' science, even though psychologists do experiment and publish their findings in respected journals. Some of the experiments psychologists have conducted over the years reveal things about the way we humans think and behave that we might not want to embrace, but which can at least help keep us humble.

many of whom take a moral high ground 2009 may well be remembered for its scandal-ridden headlines, from admissions of extramarital affairs by governors and senators, to corporate executives flying private jets while cutting employee benefits, and most recently, to a mysterious early morning car crash in Florida. The past year has been marked by a series of moral transgressions by powerful figures in political, business and celebrity circles. New research from the Kellogg School of Management at Northwestern University explores why powerful people - many of whom take a moral high ground - don't practice what they preach.

The Sixteen Personality Types - High-Level ISTJ - The Duty Fulfiller Serious and quiet, interested in security and peaceful living. Extremely thorough, responsible, and dependable. The Dark Side of Oxytocin, the Hormone of Love - Ethnocentrism Yes, you knew there had to be a catch. As oxytocin comes into sharper focus, its social radius of action turns out to have definite limits. The love and trust it promotes are not toward the world in general, just toward a person’s in-group. Oxytocin turns out to be the hormone of the clan, not of universal brotherhood. Psychometric The Psychology Department has the following tests which may be used only by Psychology staff and students for testing purposes. They are available to be borrowed from Karen Fleet in the Psychology & Philosophy Library which is staffed 9-5 on weekdays during term-time. For more detailed information on which test is appropriate for your study please consult your supervisor or demonstrator. As well as looking at the list of tests held by the department you can do a keyword search on databases such as the Web of Knowledge. There are a number of web pages which give guidance on psychological testing such as the American Psychological Association's 'Testing and Assessment Program' or the British Psychological Society's 'Psychological Testing Centre (PTC)'.

Rosenhan experiment Rosenhan's study was done in two parts. The first part involved the use of healthy associates or "pseudopatients" (three women and five men, including Rosenhan himself) who briefly feigned auditory hallucinations in an attempt to gain admission to 12 different psychiatric hospitals in five different states in various locations in the United States. All were admitted and diagnosed with psychiatric disorders. After admission, the pseudopatients acted normally and told staff that they felt fine and had no longer experienced any additional hallucinations. All were forced to admit to having a mental illness and agree to take antipsychotic drugs as a condition of their release. The average time that the patients spent in the hospital was 19 days.

To predict what will make you happy, ask a stranger rather than guessing yourself Want to know how much you’d enjoy an experience? You’re better off asking someone who has been through it, even if they’re a complete stranger, than to find out information for yourself. This advice comes from Daniel Gilbert from Harvard University, who espoused it in his superb book Stumbling on Happiness. Now, he has found new support for the idea by studying speed-daters and people receiving feedback from their peers. In the first study, he found that female students were better able to predict how much they would enjoy a speed-date if they listened to the experiences of strangers than if they make their own assessments based on available information.

Crafter (role variant) Crafters are tactical operators, concrete in speech and utilitarian in action. In social situations, they are directive and reserved.[2] Crafters are masters at using tools of every type—artistic, technological, martial. Although they are introverts, they are authoritarian in their interactions with others and can be forceful at influencing people. They focus on accomplishing tasks efficiently and skillfully. BrainMind.net When hallucinations follow depth electrode or cortical stimulation, much of the material experienced is very dream-like (Gloor 1990, 1992; Halgren et al., 1978; Malh et al., 1964; Penfield & Perot 1963) and consists of recent perceptions, ideas, feelings, and other emotions which are similarly illusionary and dream-like. Indeed, the right amygdala, hippocampus, and the right hemisphere in general (Broughton, 1982; Goldstein et al., 1972; Hodoba, 1986; Humphrey & Zangwill, 1961; Kerr & Foulkes, 1978; Meyer et al. 1987) also appear to be involved in the production of deam imagery as well as REM sleep (chapter 10). For example stimulation of the amygdala triggers and increases ponto-geniculo-occipital paradoxical activity during sleep (Calvo, et al. 1987), which in turn is associated with REM and dreaming. The Right Hemisphere & Dreams. Forgotten Dreams. Most individuals, however, have difficulty recalling their dreams.

Signs You're An Introvert Think you can spot an introvert in a crowd? Think again. Although the stereotypical introvert may be the one at the party who’s hanging out alone by the food table fiddling with an iPhone, the “social butterfly” can just as easily have an introverted personality. “Spotting the introvert can be harder than finding Waldo,” Sophia Dembling, author of “The Introvert’s Way: Living a Quiet Life in a Noisy World,” tells The Huffington Post. The fine dopamine line between creativity and schizophrenia New research shows a possible explanation for the link between mental health and creativity. By studying receptors in the brain, researchers at the Swedish medical university Karolinska Institutet have managed to show that the dopamine system in healthy, highly creative people is similar in some respects to that seen in people with schizophrenia. High creative skills have been shown to be somewhat more common in people who have mental illness in the family. Creativity is also linked to a slightly higher risk of schizophrenia and bipolar disorder. Certain psychological traits, such as the ability to make unusual pr bizarre associations are also shared by schizophrenics and healthy, highly creative people.