How to make bias tape

Bias Binding: Figuring Yardage, Cutting, Making, Attaching. We were going to call this tutorial: Bias Binding: Basics & Beyond, however, we decided to forgo the clever alliteration and instead focus on the key words we hear whenever we receive questions about this very hot topic: "How do you figure out how much fabric you need? 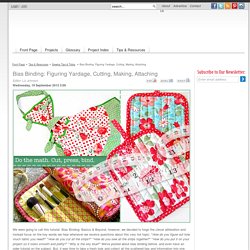 " "How do you cut all the strips? " "How do you sew all the strips together? " "How do you put it on your project so it looks smooth and pretty? " "Why is the sky blue? " We've posted about bias binding before, and even have an older tutorial on the subject. Depending on whom you talk to, the word bias can have varied meanings. We’ll be explaining: how to calculate the amount of fabric you need, how to determine the square size needed for the width of strips you will be cutting, how to join strips, which foot to use on your sewing machine, and, as always, a few tips we’ve discovered along the way.

The main reason is because of the 45° angle cut, or bias cut. Third, it’s easy on your budget. Travel Accessories: Lingerie Caddy. Continuous Bias Tape Tutorial. Welcome to Day 3 of the Coastal Cargos sew along. 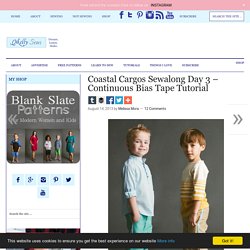 Today we’re tackling bias tape and outseams. If you’re an overachiever, you can go ahead and put your cargo pockets on. But first, a bias tape tutorial. I think the bias tape is my favorite detail on this pattern. So I wanted to show you, with the fabric I’m using, how I make my bias tape. This is much easier than it appears. Start by folding your fabric on the bias – this is the same method I was taught to make a square out of a rectangular piece of paper. Match two straight grain edges right sides together like this and sew. Press the seam open. Using a ruler, mark lines on the bias grain of the fabric on the wrong side. Fold your fabric, imagining that the spaces are numbered like this on one side.

Your sewn tube will look like this – one each side is offset a little. Now start cutting on your lines. Continue cutting until you have a pile of unfolded bias tape. tips. All purty and ready to sew the side seams of the pants. Related. Making Continuous Bias Tape with Whipstitch. Tutorial: How to make continuous bias tape   {photo of floral bias tape trim by uklassinus} As mentioned previously here, bias tape is pretty, useful, and adds a unique touch to garments. 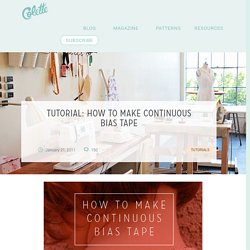 It’s also a fabulous way to use up scrap fabric from other sewing projects. After sorting through photos of bias tape for inspiration, I want to hole up in the studio and transform pieces of left over fabric into enough bias tape to reach the moon! Luckily, this tutorial simplifies the process of making bias tape by allowing you to avoid stitching each individual strip together, hence the name continuous bias tape. If you have any questions about the why & how of bias tape or just want to see an alternate technique, check out Sarai’s tutorial, which uses a strip piecing method rather than a continuous loop. Also note that I used a 10″ x 10″ square of fabric for this particular tutorial, but if you have less material to work with that’s okay, too! How to Make and Sew Bias Tape. I spent years of my sewing life hating bias tape. 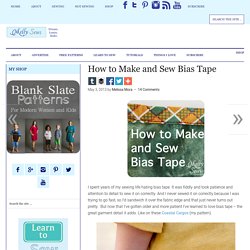 It was fiddly and took patience and attention to detail to sew it on correctly. And I never sewed it on correctly because I was trying to go fast, so I’d sandwich it over the fabric edge and that just never turns out pretty. But now that I’ve gotten older and more patient I’ve learned to love bias tape – the great garment detail it adds. Like on these Coastal Cargos (my pattern). And of course you can’t get that kind of fabric in pre-packaged bias tape, so I’ve also learned to make my own, which I will show you today. Getting Flat Bias Necklines. I often get questions asking how I get my bias faced necklines to lay flat, so I’m here today with a tutorial to help you do just that. 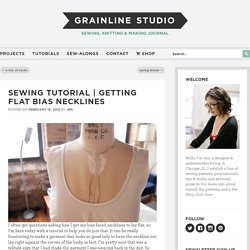 It can be really frustrating to make a garment that looks so good only to have the neckline not lay right against the curves of the body, in fact, I’m pretty sure that was a telltale sign that I had made the garment I was wearing back in the day. So first off, if you’re wondering what a bias faced neckline is, it’s where the neckline if finished with a strip of bias fabric that is turned to the inside and stitched in place. It’s how I finished the necklines of both the Tiny Pocket Tank and the Scout Woven Tee. It’s really very easy, just a few extra steps and some pressing that are well worth it in the end. As usual with tutorials this is an image heavy post, so click the link below to view the entire tutorial. ▲ A quick note. Step 01 | Preparing Your Garment.