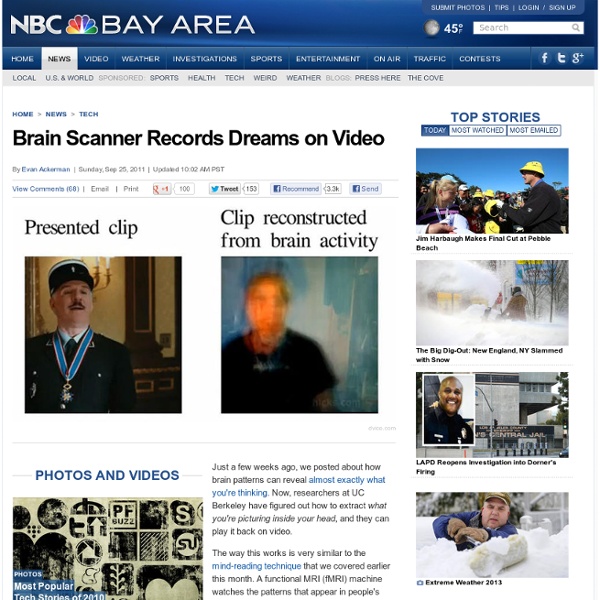 Just a few weeks ago, we posted about how brain patterns can reveal almost exactly what you're thinking. Now, researchers at UC Berkeley have figured out how to extract what you're picturing inside your head, and they can play it back on video. The way this works is very similar to the mind-reading technique that we covered earlier this month. A functional MRI (fMRI) machine watches the patterns that appear in people's brains as they watch a movie, and then correlates those patterns with the image on the screen. With these data, a complex computer model was created to predict the relationships between a given brain pattern and a given image, and a huge database was created that matched 18,000,000 seconds worth of random YouTube videos to possible brain patterns. Comparing the brain-scan video to the original video is just a way to prove that the system works, but there's nothing stopping this technique from being used to suck video out of people's heads directly.

Physics and Consciousness Body Energy Frequency by StarStuffs "To know the mechanics of the wave is to know the entire secret of Nature." Walter Russell The psychodynamics of the mind as an electromagnetic structure establishes the nature and reality of consciousness as an interdimensional energy process. It is an electrical process of cause and effect. Our consciousness determines our vibration (frequency and amplitude) When we realize that time and space are really ONE I think we then go beyond a simple understanding. When our energy-amplitude is raised higher it is synonymous with our frequency (time) getting higher. For instance, You are standing by me...you raise your energy, which raises your frequency [if you are efficient at it {efficient in science is least amount of work for the energy expended)]. This parallels the concept of the Superstring theory which assumes there are an infinite and alternate series of parallel universes that exist. Music: "The energy of the heart, right down to our DNA is musical and rhythmic in nature. Sound: Brain:

We Can Survive Killer Asteroids — But It Won't Be Easy | Wired Science The chances that your tombstone will read “Killed by Asteroid” are about the same as they’d be for “Killed in Airplane Crash.” Solar System debris rains down on Earth in vast quantities — more than a hundred tons of it a day. Most of it vaporizes in our atmosphere, leaving stunning trails of light we call shooting stars. More hazardous are the billions, likely trillions, of leftover rocks — comets and asteroids — that wander interplanetary space in search of targets. Most asteroids are made of rock. But some do. Every few decades, on average, house-sized impactors collide with Earth. One killer asteroid we’ve been monitoring is Apophis, which is large enough to fill the Rose Bowl. If humans one day become extinct from a catastrophic collision, we would be the laughing stock of aliens in the galaxy Some people would like to blow potentially hazardous rocks out of the sky with a nuclear bomb. The odds-on favorite solution, however, is the gravitational tractor. Opinion Editor: John C.

New test for consciousness in 'comatose' patients The Coma Science Group (CRCyclotron, University of Liège /Liège University Hospital), led by Dr Steven Laureys, has developed, along with its partners in London, Ontario, (Canada) and Cambridge (England), a portable test which will permit a simpler and less expensive diagnosis of 'vegetative' patients who still have consciousness, despite the fact that they do not have the means to express it. The researchers' conclusions are published this week in The Lancet. The desire to develop this simple test of consciousness, at the patient's bedside, follows on from previous research carried out by the Coma Science Group. Professor Steven Laureys and his colleagues had in effect already demonstrated, in 2009, that 40% of so-called 'vegetative' patients had been badly diagnosed and that in reality they retained a certain degree of consciousness. The new test described this week in The Lancet should change this situation.

Optical Illusions & Blog Archive & Body Art - Hand Animals - StumbleUpon These have to be some of the best examples of hand art I’ve ever seen. Great fun to look at for the kids and a real example of how to disguise your hand as an elephant, eagle or tiger. Click the main post for the full set of pictures. 13 more things that don't make sense Cookies on the New Scientist website close Our website uses cookies, which are small text files that are widely used in order to make websites work more effectively. Find out about our cookies and how to change them Log in Your login is case sensitive I have forgotten my password close My New Scientist Look for Science Jobs 13 more things that don't make sense (Image: Loungepark / The Image Bank / Getty) Strive as we might to make sense of the world, there are mysteries that still confound us. Axis of evil Radiation left from the big bang is still glowing in the sky – in a mysterious and controversial pattern Dark flow Something unseeable and far bigger than anything in the known universe is hauling a group of galaxies towards it at inexplicable speed Eocene hothouse Tens of millions of years ago, the average temperature at the poles was 15 or 20 °C. Fly-by anomalies Space probes using Earth's gravity to get a slingshot speed boost are moving faster than they should. Hybrid life Morgellons disease

The Blog : The Mystery of Consciousness II (Photo by h.koppdelaney) The universe is filled with physical phenomena that appear devoid of consciousness. From the birth of stars and planets, to the early stages of cell division in a human embryo, the structures and processes we find in Nature seem to lack an inner life. Many readers of my previous essay did not understand why the emergence of consciousness should pose a special problem to science. This situation has been characterized as an “explanatory gap” and the “hard problem of consciousness,” and it is surely both. However, many people imagine that consciousness will yield to scientific inquiry in precisely the way that other difficult problems have in the past. What intelligible account can the mechanistic theory of life give of the…recovery from disease and injuries? Scarcely twenty years passed before our imaginations were duly stretched. The analogy is a bad one: Life is defined according to external criteria; Consciousness is not (and, I think, cannot be).

Mad science News, Videos, Reviews and Gossip - io9 About 60 years late to the party on dreaming that one up, friend. :-) in short...solar power is inefficient, and electrolysis of water to create hydrogen is energy intensive, which means it wastes a lot of energy to create that hydrogen to be used as an energy source. IIRC electrolysis is at best 50% energy efficient, with solar being 20% efficient at converting sunlight to electricity, which has a decent, but low yield in the first place. A meter square of solar cells intercepts ~1200 watts of power. This returns only 20%, so 60w, 50% of which is lost for electrolysis, so we're down to 30W of power stored. Fuel cells convert something like 60% of stored energy into actual mechanical, lets get this thing moving energy...so we're down to 19.2W of energy used via hydrogen fuel cells filled using every square meter of solar cells we use. We could do it, but as you can see we lose a lot of energy in the process.

Pacific Refuges for Devastated Corals | Global Warming & Coral Bleaching Global warming is expected to have devastating effects on coral reefs, but recent research points to a few exceptions. Warming in the equatorial Pacific may actually create refuges for corals around a handful of islands, even as it bleaches, or kills, corals elsewhere, suggests new research that predicts increased upwelling of cold, nutrient-rich water in these places. "These little islands in the middle of the ocean can counteract global trends and have a big impact on their own future, which I think is a beautiful concept," said study researcher Kristopher Karnauskas, a Woods Hole Oceanographic Institution scientist, in a press release issued by the institution. If predictions made by Karnauskas and colleague Anne Cohen are accurate, warming around the Gilbert Islands will be slower than elsewhere, giving the corals and their symbiotic algae a better chance to adapt. Corals are animals that host tiny plants, or algae, that feed them using photosynthesis.

Carlos Castaneda Carlos Castaneda (birthdate unclear – died April 27, 1998),[1] was an American author with a Ph.D. in anthropology. Early life[edit] He moved to the United States in the early 1950s and became a naturalized citizen in 1957. Castaneda was educated at UCLA (B.A. 1962; Ph.D. 1973).[2] Career[edit] Castaneda's first three books – The Teachings of Don Juan: A Yaqui Way of Knowledge; A Separate Reality; and Journey to Ixtlan – were written while he was an anthropology student at the University of California, Los Angeles (UCLA). In 1974 his fourth book, Tales of Power, was published and chronicled the end of his apprenticeship under the tutelage of Matus. In his books, Castaneda narrates in first person the events leading to and following after his meeting Matus, a half-Yaqui "Man of Knowledge", in 1960. In all,12 books by Castaneda were published, two posthumously. "To ask me to verify my life by giving you my statistics... is like using science to validate sorcery. The interviewer wrote: [edit]

The Largest Penis in the World We, humans, may not be endowed by nature with great physical abilities: powerful muscles or weaponry like fangs, claws, horns and so on. But there is one chapter where we excel: sex. I'm not talking about sexual activity - at it has been proved that bonobo (which is also wrongly named "dwarf chimpanzee") has more sex and much varied than the human being - but about penis size. Man is the ape, the monkey and the primate with the biggest penis! Gorilla males, which dwarf humans in size, have minute penises compared to ours, no thicker and longer than a pencil. In some African countries, saying that one is 'hung like a gorilla' is considered an insult. That's about us, but which is the largest penis in nature? Well, despite the huge size of penises in elephants and odd hoofed mammals (like rhinos and horses), the biggest penis indeed belongs to the biggest animal: the blue whale. Accurate measurements are difficult to be made because the whale's erect length can only be observed during mating.