28 Ways to Stop Complicating Your Life 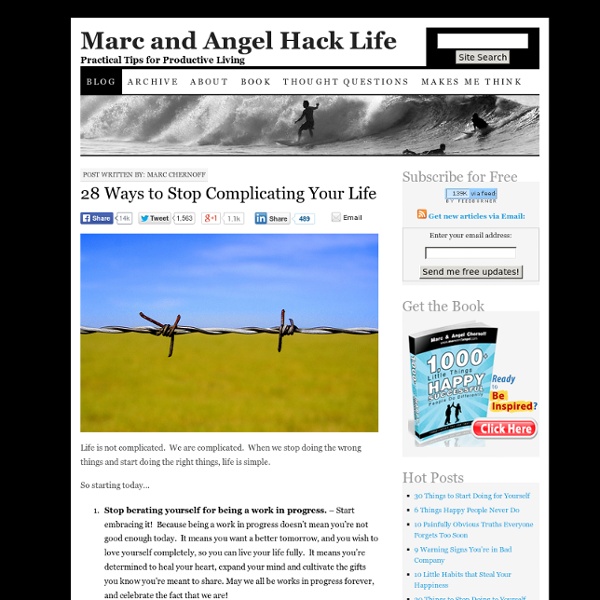 post written by: Marc Chernoff Email Life is not complicated. We are complicated. When we stop doing the wrong things and start doing the right things, life is simple. So starting today… Stop berating yourself for being a work in progress. – Start embracing it! Photo by: Norma Desmond If you enjoyed this article, check out our new best-selling book. And get inspiring life tips and quotes in your inbox (it's free)...

Psst! The Human Brain Is Wired For Gossip hide captionLearning juicy details about someone can change the way you see them — literally, according to a new study. August Darwell/Getty Images Hearing gossip about people can change the way you see them — literally. Negative gossip actually alters the way our visual system responds to a particular face, according to a study published online by the journal Science. The findings suggest that the human brain is wired to respond to gossip, researchers say. Complex (psychology) For alternate usage, see complexity. A complex is a core pattern of emotions, memories, perceptions, and wishes in the personal unconscious organized around a common theme, such as power or status (Schultz, D. & Schultz, S., 2009). Primarily a psychoanalytic term, it is found extensively in the works of Carl Jung and Sigmund Freud. An example of a complex would be as follows: if you had a leg amputated when you were a child, this would influence your life in profound ways, even if you were wonderfully successful in overcoming the handicap. You might have many thoughts, emotions, memories, feelings of inferiority, triumphs, bitterness and determinations centering on that one aspect of your life. If these thoughts troubled you, Jung would say you had a complex about the leg (Dewey, 2007).

Myers-Briggs Type Indicator Model of personality types A chart with descriptions of each Myers–Briggs personality type and the four dichotomies central to the theory The Myers–Briggs Type Indicator (MBTI) is an introspective self-report questionnaire indicating differing psychological preferences in how people perceive the world and make decisions.[1][2][3] The original versions of the MBTI were constructed by two Americans, Katharine Cook Briggs and her daughter Isabel Briggs Myers.[4] The MBTI is based on the conceptual theory proposed by Swiss psychiatrist Carl Jung,[5] who had speculated that people experience the world using four principal psychological functions – sensation, intuition, feeling, and thinking – and that one of these four functions is dominant for a person most of the time.[6] The four categories are Introversion/Extraversion, Sensing/Intuition, Thinking/Feeling, Judging/Perception.

Carl Jung Carl Gustav Jung (/jʊŋ/; German: [ˈkarl ˈɡʊstaf jʊŋ]; 26 July 1875 – 6 June 1961), often referred to as C. G. Jung, was a Swiss psychiatrist and psychotherapist who founded analytical psychology.[2] Jung proposed and developed the concepts of the collective unconscious, archetypes, and extraversion and introversion. Decision theory Normative and descriptive decision theory[edit] Since people usually do not behave in ways consistent with axiomatic rules, often their own, leading to violations of optimality, there is a related area of study, called a positive or descriptive discipline, attempting to describe what people will actually do. Since the normative, optimal decision often creates hypotheses for testing against actual behaviour, the two fields are closely linked. Furthermore it is possible to relax the assumptions of perfect information, rationality and so forth in various ways, and produce a series of different prescriptions or predictions about behaviour, allowing for further tests of the kind of decision-making that occurs in practice. In recent decades, there has been increasing interest in what is sometimes called 'behavioral decision theory' and this has contributed to a re-evaluation of what rational decision-making requires.[1]

Recognition primed decision Recognition-primed decision (RPD) is a model of how people make quick, effective decisions when faced with complex situations. In this model, the decision maker is assumed to generate a possible course of action, compare it to the constraints imposed by the situation, and select the first course of action that is not rejected. RPD has been described in diverse groups including Whitewater kayaking Trauma nurses, fireground commanders, chess players, commercial Whitewater river guides and stock market traders. It functions well in conditions of time pressure, and in which information is partial and goals poorly defined. The limitations of RPD include the need for extensive experience among decision-makers (in order to correctly recognize the salient features of a problem and model solutions) and the problem of the failure of recognition and modeling in unusual or misidentified circumstances. It appears[to whom?]

Living in the Present Is a Disorder The opening titles sequence of Game of Thrones conveys a presentist style. Image: HBO We’re living in the now, we no longer have a sense of future direction, and we have a completely new relationship to time. That’s the premise of Douglas Rushkoff’s latest book Present Shock: When Everything Happens Now, a sort-of update to Alvin Toffler’s influential Future Shock from decades ago. I met Rushkoff back when I was editor of the cyberpunk magazine Mondo 2000, when he was working on his first book about digital culture.

7 Skills To Become Super Smart People aren’t born smart. They become smart. And to become smart you need a well-defined set of skills. Here are some tips and resources for acquiring those skills. Memory If you can’t remember what you’re trying to learn, you’re not really learning. Ways to Improve Human Intelligence This briefing is intended to pull into one convenient, single frame of reference a body of key information which currently is scattered across a great many different contexts. Until recently, even the possibility of any such information existing was, for essentially political reasons and funding reasons, denied by most of our institutions, together with most of our educators and psychologists, so that such findings as were made in various contexts and circumstances never got discussed across a broader context. Now that it is evident that the brain, and one's intelligence, are highly changeable and that a wide variety of conditions, arrangements and techniques may be employed to improve both brain functioning and intelligence to even a profound degree, we need to make a start on getting a lot of this key information organized to where you and other inquirers can more readily get at it, understand it, and use it. Menu of Methods Quick Interjection

Notes from the Undergrad By Andrew Newburg | Yawn. Go ahead: Laugh if you want (though you’ll benefit your brain more if you smile), but in my professional opinion, yawning is one of the best-kept secrets in neuroscience. Even my colleagues who are researching meditation, relaxation, and stress reduction at other universities have overlooked this powerful neural-enhancing tool. However, yawning has been used for many decades in voice therapy as an effective means for reducing performance anxiety and hypertension in the throat. Several recent brain-scan studies have shown that yawning evokes a unique neural activity in the areas of the brain that are directly involved in generating social awareness and creating feelings of empathy. Tuning In To The Brain's 'Cocktail Party Effect' Scientists are beginning to understand how the human brain accomplishes a remarkable trick known as the cocktail party effect. It's what allows us to pick out the words from just one speaker even when we're in a room full of other voices that are just as loud. For decades, scientists have puzzled over how our brain is able to focus on certain sounds while filtering out others. Now they say they're finding clues, thanks to new research on birds and bats. Birds don't spend much time at cocktail parties, but they do face a similar auditory challenge, says Frederic Theunissen of the University of California, Berkeley.

Body of Thought: How Trivial Sensations Can Influence Reasoning, Social Judgment and Perception Why do we look up to those we respect, stoop to the level of those we disdain and think warmly about those we love? Why do we hide dirty secrets or wash our hands of worries? Why do we ponder weighty subjects and feel a load lift after we have made a decision? Why do we look back on the past and forward to the future?