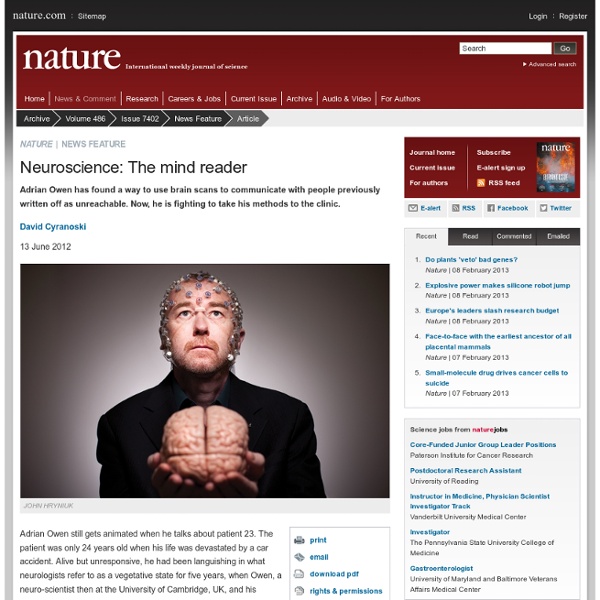 Adrian Owen still gets animated when he talks about patient 23. The patient was only 24 years old when his life was devastated by a car accident. Alive but unresponsive, he had been languishing in what neurologists refer to as a vegetative state for five years, when Owen, a neuro-scientist then at the University of Cambridge, UK, and his colleagues at the University of Liège in Belgium, put him into a functional magnetic resonance imaging (fMRI) machine and started asking him questions. Incredibly, he provided answers. A change in blood flow to certain parts of the man's injured brain convinced Owen that patient 23 was conscious and able to communicate. Patients in these states have emerged from a coma and seem awake. Owen's discovery1, reported in 2010, caused a media furore. Nature Podcast Communicating with vegetative patients. Many researchers disagree with Owen's contention that these individuals are conscious. Lost and found Owen wanted to find one. Anyone for tennis? To the clinic

Can Your Friends Bribe You to Get Healthy? Neuroscience Says Yes Wade Roush6/15/12 HealthRally is a company that Paul McCartney would understand well. It’s all about getting a little help from your friends. A little help making health-related changes, that is—like quitting smoking, losing weight, or adhering to an exercise program. Lurking right behind HealthRally’s cheerful Web interface, there’s a complex recipe that draws on lessons from neuroscience and behavioral economics to keep users and their teams of supporters inspired. HealthRally co-founder Zack Lynch in an interview with NBC Bay Area “The cutting edge of neuroscience is behavior change,” Lynch argues. HealthRally debuted last fall with $400,000 in seed funding from Esther Dyson, Ty Danco, and other prominent angel investors. Wade Roush: Where did the idea for HealthRally come from? Zack Lynch: It was through writing the book that a couple of things came to me. WR: What sorts of personal experiences? ZL: My brother was a smoker.

Buddha's Brain: Neuroplasticity and Meditation This is your brain on no self-control This image shows brain activity when people exert self-control. New pictures from the University of Iowa show what it looks like when a person runs out of patience and loses self-control. A study by University of Iowa neuroscientist and neuro-marketing expert William Hedgcock confirms previous studies that show self-control is a finite commodity that is depleted by use. Once the pool has dried up, we're less likely to keep our cool the next time we're faced with a situation that requires self-control. But Hedgcock's study is the first to actually show it happening in the brain using fMRI images that scan people as they perform self-control tasks. However, the dorsolateral prefrontal cortex (DLPFC)—the part of the brain that manages self-control and says, "I really want to do the dumb thing, but I should overcome that impulse and do the smart thing"—fires with less intensity after prior exertion of self-control.

Magic Moments: AAC Intervention with BrainPOP There’s so much to love about BrainPOP. Geared for students in 4th-12th grades. Solid curricular content. Engaging animation and really fun educational games. Aligned with Common Core. -Magic Moments: Ideas for AAC Intervention with BrainPOP1. 2. 3. 4. 5. Be Sociable, Share! Tags: intervention, language, Magic Moments About the Author Carole Zangari Carole Zangari has been involved in the practice and teaching of AAC for over 20 years.

Somewhere over the brainbow: New 3D maps of the brain will Magnetic resonance scanner builds first 3D interior maps of brainCould allow treatment of brain disordersScans up until now 'have not shown the real brain,' say researchers By Rob Waugh Published: 10:43 GMT, 4 June 2012 | Updated: 16:00 GMT, 5 June 2012 Harvard scientists have developed hi-tech new methods to explore inside the human brain using magnetic resonance scanning. Professor Jan Wedeen claims that the rainbow-coloured scans offer the first real insight into the pathways of the human brain's 100 billion cells - and how it works. ‘The brain we’ve been looking at with conventional scans all these years is not the real brain,' says Wedeeen. A fluorescent 'brainbow' map of the connecting nerve cells in a brain by Harvard's Jeff Lichtman, which shows patterns of fibres interconnecting to form a 3D brain The 3D maps will allow us to see 'inside' the workings of the brain for the first time, claim the scientists 'But we don’t have real tools to understand it it.

How brain performs 'motor chunking' tasks You pick up your cell phone and dial the new number of a friend. Ten numbers. One. Number. At. After dialing the number a few more times, you find yourself typing it out as a series of three successive bursts of movement: the area code, the first three numbers, the last four numbers. "You can think about a chunk as a rhythm," said Nicholas Wymbs, a postdoctoral researcher in UC Santa Barbara's Department of Psychological and Brain Sciences, and the lead author of a new study on motor chunking in the journal Neuron, published by Cell Press. The rhythm is the human brain taking information and processing it in an efficient way, according to Wymbs. But it is also in our brain's best interest to assemble single or short strings of movements into longer, integrated sequences so that a complex behavior can be made with as little effort as possible. The study was conducted using human subjects in the Magnetic Resonance Imaging (MRI) scanner in the Brain Imaging Center.

10 Tips on How to Explore and Study Intention Edit Article Edited by George AP, Teresa, Flickety, Daniel and 10 others Intention is a surprisingly important, but rarely explored part of the mind, as its significance is only important after the fact. Only once you've spent time observing it can you find just how it fits in to day-to-day living. Intention is a main stepping stone or foundation of the mind that is important to understand - start exploring it today. Ad Steps 1Find out the ways you can best view intention as it happens. 10Continue to evaluate intention. Tips Consider studying how intention is treated within different disciplines in order to broaden your understanding of it. Warnings Take things a step at a time, this is understanding a major part of how the mind works and reacts.

How we die (in one chart) The New England Journal of Medicine looks through 200 years of back issues to understand how we die differently: The first thing to notice here is how much our mortality rate has dropped over the course of a century, largely due to big reductions in infectious diseases like tuberculosis and influenza. The way we talk about medical conditions has changed, too. NEJM finds that, back in 1812 - the first year it published - reports of spontaneous combustion were taken quite seriously by the medical community, as were debates over how, exactly one would be injured by a close-call with a cannonball: Doctors agreed that even a near miss by a cannonball — without contact — could shatter bones, blind people, or even kill them (1812f).

Olympic Torch route in Hull: 'Sophie deserves her time to shine' Proud: Sophie McMullen, 18, who has cerebral palsy, will carry the Olympic Torch through Bridlington. Picture: Jack Harland Comments (0) WHEN Sophie McMullen found out she would be carrying the Olympic Torch, she could not stop screaming. Sophie, 18, a pupil at Frederick Holmes School, was nominated for being an inspirational teenager. The fact she has severe athetoid cerebral palsy does not hold her back one bit, even though the condition affects all four limbs and her speech. A high-flyer at school, she is also an ambassador for Alternative and Augmentative Communication, spending time across Yorkshire working with mainstream and special schools, talking to pupils, parents and professionals. She said "I am really proud I'm going to be carrying the torch. "When I found out I was at home with my mum and sister and I just couldn't believe it. "I could not stop screaming." To communicate, Sophie uses a computer attached to her wheelchair, which is calibrated to her eye movements.

只有半個大腦也能活？ 人類大腦十項驚人事實報你知| 花生網 大陸新聞中心／綜合報導 大陸新聞中心／綜合報導 新浪科技據國外媒體報導，大腦是人體最重要的器官，同時也是最為複雜的器官。 1.大腦感覺不到疼痛 大腦內沒有疼痛感受器，這也就是為什麼外科醫生能夠在患者仍保持清醒的時候進行腦外科手術。 2.腦血管總長度達到16公里 人類的大腦由1000億個神經細胞構成，相當於銀河系內的恆星數量，總重量與一個羅馬甜瓜差不多。 3.愛因斯坦大腦被保留下來 1955年，愛因斯坦去世，但他的大腦卻被保留下來。 4.左右腦存在差異 大腦由左右腦構成，彼此對稱。 5.男性大腦比女性大10% 男性的大腦比女性大10%。 6.大腦在人睡覺時更活躍 進入夢鄉時，大腦會處理白天經歷的所有事情，一些科學家認為這是我們會做夢的原因所在。 7.控制夢境並非不可能 在所謂的『清醒夢』中，人們能夠控制夢境的結果。 8.人為什麼笑至今原因不明 笑是一種自然而然的行為，只有人類天生具有這種能力。 9.大腦大小很重要嗎？ 大腦大小很重要嗎？ 10.IQ最高紀錄210 韓國人金恩榮(Kim Ung-yong)是世界上IQ最高的人，高達210。 關鍵字:其他大陸生活花生網大腦人類血管器官疼痛IQ愛因斯坦 最新 Treatment should be more available: Doctor KINGSTON - Advocates of a new way of treating post traumatic stress disorder are calling for it to be made available to veterans across Canada. Called neurofeedback, the treatment has proven successful with a small group of patients at the Kingston Institute of Psychotherapy and Neurofeedback. In the past three years, Dr. Janet McCulloch, a psychiatrist at the institute, has treated close to 50 people. As part of a pilot program, Veterans Affairs Canada funded some veterans to have neurofeedback systems – computer and software – in their homes. Veterans in Kingston have had good access to neurofeedback treatment. The Kingston Institute of Psychotherapy and Neurofeedback is the largest such clinic in North America and is marking its first anniversary with an open house on Friday and Saturday. But now word about neurofeedback treatment is starting to spread. “Now they are starting to come from Trenton, and Belleville and Brockville,” McCulloch said. “I'm a people person. “It's life changing.

Dr. Dan Siegel - Resources - Wheel Of Awareness Wheel of Awareness - Consolidated October 14, 2013 This is a practice that should only be done after mastering the basic and expanded practices. download mp3 >>(right click on link to save file)