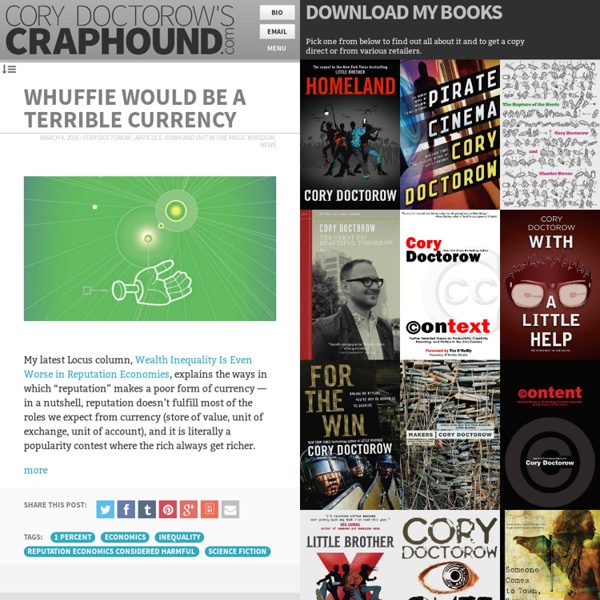 Video: Bart Gellman and me opening for Ed Snowden at SXSW Last month, Barton Gellman and I opened for Edward Snowden's first-ever public appearance, at the SXSW conference in Austin. The kind folks at SXSW have put the video online (the Snowden video itself was already up). I think we did a good job of framing the big questions raised by the Snowden leaks. My “Futuristic Tales of the Here and Now” in Vodo’s indie science fiction bundle: comics, movies, novels, and more! Jamie from Vodo writes, "We've launched Otherworlds, our first indie sci-fi bundle!

Swarmwise – The Tactical Manual To Changing The World. Chapter Two. Launching a swarm is an intense event, where you can get hundreds or thousands of new colleagues in less than a day. You have a very short window for appreciating their interest, or they will take it elsewhere. OK, so you have a provocative idea.

Category:Systems A system is a set of entities, real or abstract, comprising a whole where each component interacts with or is related to at least one other component and they all serve a common objective. For the purpose of organizing articles into categories, there are four major type of system which can reasonably be expected to contain every type of system under its category tree: Physical systems, Biological systems, Social systems, and Conceptual systems. Subcategories Cory Doctorow: Mostly signs (some portents) Mr Potato Head R2D2 The Mr. Potato Head Star Wars R2D2 goes on sale on July 14 — happy Bastille Day! Up the rebellion! (via Geekymerch) Isaac Asimov Welcome to the Isaac Asimov Home Page. Here you'll find a comprehensive collection of resources pertaining to Isaac Asimov (1920-1992), the quintessential author, who in his lifetime wrote over 500 books that enlightened, entertained, and spanned the realm of human knowledge. The Isaac Asimov FAQ The FAQ for the Usenet newsgroup alt.books.isaac-asimov provides answers to the frequently asked questions about Isaac Asimov, and is an excellent place to start if you have questions about him. Included is biographical information about both his personal life and his literary life, answers to questions about the Foundation and Robot series, and more.

monochrom Hedonistika 2016 will take place at Cinematheque Holon (near Tel Aviv) as part of Print Screen Festival! Hedonistika is an interactive exhibition of gastronomical robots, cocktail machines, and experimental food performances. Created by artists collective monochrom from Vienna, Hedonistika is a travelling festival which moves from city to city and culinary landscape to culinary landscape, find local curatorial partners and cooperate with local hackers, builders, chemists and food phreaks to present a tour-de-farce of new approaches and discourses. Hedonistika says: don't let us trick ourselves into the absurd belief that organic food and machines are enemies. They aren't. Scriptorium - Angela Carter By Jeff VanderMeer Angela Carter (1940-1992) Essay I. Volsunga Saga Online Medieval and Classical Library Release #29 Here begins the tale, and tells of a man who was named Sigi, and called of men the son of Odin; another man withal is told of in the tale, hight Skadi, a great man and mighty of his hands; yet was Sigi the mightier and the higher of kin, according to the speech of men of that time. Now Skadi had a thrall with whom the story must deal somewhat, Bredi by name, who was called after that work which he had to do; in prowess and might of hand he was equal to men who were held more worthy, yea, and better than some thereof. Go to Chapter II

Space Alien Invasion: Science Channel's 'Are We Alone?' Considers ET Confrontation With Earthlings An alien invasion is headed our way. While it's the stuff of sci-fi books, movies, TV series and hi-tech video games, what if Earth suddenly faced a real threat from out-of-this-world invaders? How would the human race survive an encounter with an unknown civilization from another world? Google URL Shortener Posted by Michael Hermanto, Software Engineer, Firebase We launched the Google URL Shortener back in 2009 as a way to help people more easily share links and measure traffic online. Since then, many popular URL shortening services have emerged and the ways people find content on the Internet have also changed dramatically, from primarily desktop webpages to apps, mobile devices, home assistants, and more. To refocus our efforts, we're turning down support for goo.gl over the coming weeks and replacing it with Firebase Dynamic Links (FDL). FDLs are smart URLs that allow you to send existing and potential users to any location within an iOS, Android or web app. We're excited to grow and improve the product going forward.

25 ways to improve your presentationsBad Language All of us have at some point been bored to tears by a presentation. If you are lucky, you have also been informed, excited and inspired by an outstanding one. If you haven’t there are plenty of good examples on TED. Nobody wants to be a presentation zero. To learn how to be a PowerPoint hero, check out these 25 tips. The topic mmunism, welfare state – what's the next big idea? Most of the world's people are decent, honest and kind. Most of those who dominate us are inveterate bastards. This is the conclusion I've reached after many years of journalism. Writing on Black Monday, as the British government's full-spectrum attack on the lives of the poor commences, the thought keeps returning to me. "With a most inhuman cruelty, they who have put out the people's eyes reproach them of their blindness." This government, whose mismanagement of the economy has forced so many into the arms of the state, blames the sick, the unemployed, the underpaid for a crisis caused by the feral elite – and punishes them accordingly.

Cory Doctorow is a practicing post-modernist / singularist in the sense that he applies the abstract in his books: released under the Creative Commons License, opening the novels and stories up to the crowd-sourced post-modern extancy. by emrwpoet Apr 6