The man who hears colour 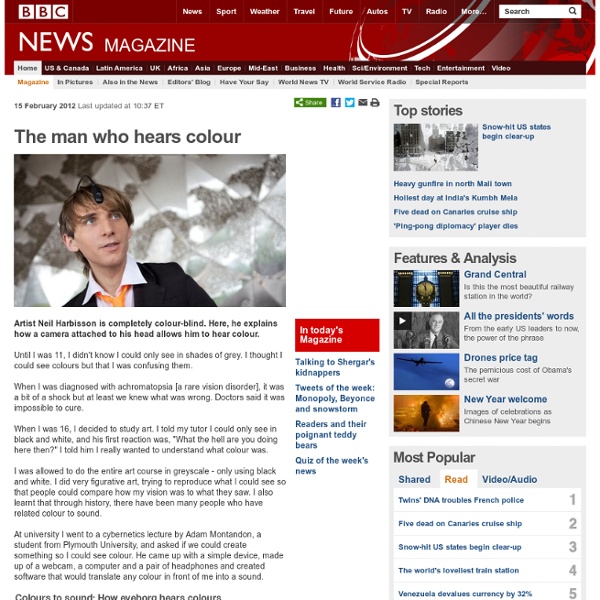 15 February 2012Last updated at 15:37 Artist Neil Harbisson is completely colour-blind. Here, he explains how a camera attached to his head allows him to hear colour. Until I was 11, I didn't know I could only see in shades of grey. When I was diagnosed with achromatopsia [a rare vision disorder], it was a bit of a shock but at least we knew what was wrong. When I was 16, I decided to study art. I was allowed to do the entire art course in greyscale - only using black and white. At university I went to a cybernetics lecture by Adam Montandon, a student from Plymouth University, and asked if we could create something so I could see colour. If we were all to hear the frequency of red, for example, we would hear a note that is in between F and F sharp. I started using it 24 hours a day, carrying it around in a backpack and feeling that the cybernetic device, the eyeborg, and my organism were completely connected. Continue reading the main story Shades of grey Continue reading the main story

World Wide Mind [H]uman nature was originally one and we were a whole, and the desire and pursuit of the whole is called love.—Plato, The Symposium When my BlackBerry died I took it to a cell phone store in San Francisco’s Mission district. “JVM 523,” I said mournfully. The clerk called tech support while I wandered around the store,peering at cell phone covers and batteries. “It’s dead,” he said. “You can’t just reload the operating system?” “They say not.” “How can a software bug kill a BlackBerry?” He shrugged. “All right,” I said, and walked out, minus BlackBerry. The stores were full of avocados and plantains, $15 knapsacks hanging from awnings, and rows of watches in grimy windows. Except for my email, and the Internet. Most of all, I couldn’t ask it, “Who is this person?” I had asked it that question a few months earlier while visiting Gallaudet University, a school for the deaf in Washington, D.C. The professor was blond and flamingo-slender, with a snub nose. Nosy?

Lewis on Kahneman: The Merits of Intellectual Self-Torture | Mind Matters "As a man is," wrote William Blake, "so he sees. As the eye is formed, such are its powers." No doubt my tumultuous childhood is a part of the reason I find long-term investment advice rather funny. "Do this for 40 years and be assured of a sound retirement." Really? Who thinks we can be sure what will happen next week across the street, much less in the global economy four decades hence? Kahneman, of course, won the Nobel Price in Economics in 2002 for his work with the late Amos Tversky, which demonstrated the predictable but non-rational ways in which human minds work. Kahneman's eye was formed in part by his childhood as a Jew in Nazi-occupied France, which was, as Lewis puts it, "punctuated by dramatic examples of the unpredictability of human behavior and the role of accident in life." Yet it's hard to believe that one's early experiences of life don't leave any trail. All in all, a fine profile.

The remote control helicopter you can control with your mind Special headband monitors brainwaves, and can trigger commands when certain states are met - such as the user being relaxedHelicopter can help users train their mind to enter a relaxed state By Mark Prigg Published: 18:14 GMT, 16 November 2012 | Updated: 18:22 GMT, 16 November 2012 If you've ever struggled to control a remote control helicopter and sent it crashing into a wall, help could be hand. A US firm is raising money for a remote control helicopter maneuvered not by a joystick, but by the mind. The Puzzlebox Orbit uses a headset to monitor brainwave readings. Scroll down for video The spherical helicopter, designed to be able to withstand being flown into objects, is controlled by a headwaves which can read brainwaves The user wears a headset which monitors their brain activity. When they enter a set (eg relaxed) state, flight patterns such as a preprogrammed path or commands such as 'hover' can be triggered. 'We are building and selling this crazy new toy,' its founders say.

Life's Messy. Train Your Brain to Adapt. | Think Tank What's the Big Idea? Margaret Moore is the founder and co-director of the Institute of Coaching at McLean Hospital. Paul Hammerness, MD, is a professor of psychiatry at Harvard Medical School. Together, they hope to get at the physical and psychological roots of chaos. In a recent interview, Moore told Big Think that there is a cognitive basis for chronic disorganization. Organization, she says, is not just about a cluttered desk. But the plasticity of the brain means we can all learn to be better focused and more organized. Q: Can we actually reshape our habits just by thinking? Stress is designed biologically to be powerful; it takes over your brain much more than positive emotion. What's the Significance? The quickest way to deal with stress, says Moore, is to summon a positive emotion. So why do we so often fail to stick to our organizational goals? If you learn how your brain works and work with it, you can start to exercise more cognitive control over your own functioning.

Brain Computer Interface used to control the movement and actions of an android robot Researchers at the CNRS-AIST Joint Robotics Laboratory and the CNRS-LIRMM Interactive Digital Human group, are working on ways to control robots via thought alone. "Basically we would like to create devices which would allow people to feel embodied, in the body of a humanoid robot. To do so we are trying to develop techniques from Brain Computer Interfaces (BCI) so that we can read the peoples thoughts and then try to see how far we can go from interpreting brain waves signals, to transform them into actions to be done by the robot." The interface uses flashing symbols to control where the robot moves and how it interacts with the environment around it. "And the applications targeted are for tetraplegics or paraplegics to use this technology to navigate using the robot, and for instance, a paraplegic patient in Rome would be able to pilot a humanoid robot for sightseeing in Japan."

The Internet Is Ruining Your Brain [INFOGRAPHIC] Admit it: As you're reading this, you have tunnel vision — that feeling that the world is closing in on you after surfing the Internet for eight straight hours. Web dead head (yes, I made that up) is a growing concern for today's connected generation, which collectively spends 35 billion hours on the Internet every month. But we're not just talking one online shopping experience at a time. Often, we have four tabs open, cycling between emails and shopping, tweeting and word processing. SEE ALSO: Your Desk Job Makes You Fat, Sick and Dead [INFOGRAPHIC] Turns out, multi-tasking online doesn't positively exercise our brains or mental state. Scared? Thumbnail courtesy of iStockphoto, Firstsignal

A Biological Basis for the Unconscious? | Think Tank What's the Big Idea? Today, the question of how people make decisions is an animated and essential one, capturing the attention of everyone from neuroscientists to lawyers to artists. In 1956, there was one person in all of New York known for his work on the brain: Harry Grundfest. An aspiring psychiatrist who was born in Austria in the 1930's, Eric Kandel took an elective in brain science during medical school and found himself studying alongside Grudfest at Columbia University. “What is it you want to study?” That’s exactly what Kandel did, earning a Nobel Prize in physiology/medicine in 2000 for his discoveries concerning signal transduction in the nervous system, which showed that memory is encoded in the neural circuits of the brain. It wasn’t clinical practice or theory that interested him. Recent studies by Helen Mayberg back up this conclusion. What's the Significance? The answer is of course, no.

Neuroscience: The mind reader Adrian Owen still gets animated when he talks about patient 23. The patient was only 24 years old when his life was devastated by a car accident. Alive but unresponsive, he had been languishing in what neurologists refer to as a vegetative state for five years, when Owen, a neuro-scientist then at the University of Cambridge, UK, and his colleagues at the University of Liège in Belgium, put him into a functional magnetic resonance imaging (fMRI) machine and started asking him questions. Incredibly, he provided answers. Patients in these states have emerged from a coma and seem awake. Owen's discovery1, reported in 2010, caused a media furore. Nature Podcast Communicating with vegetative patients. Many researchers disagree with Owen's contention that these individuals are conscious. Still, he shies away from asking patients the toughest question of all — whether they wish life support to be ended — saying that it is too early to think about such applications. Lost and found To the clinic

Brain frontal lobes not sole center of human intelligence, comparative research suggests May 13, 2013 — Human intelligence cannot be explained by the size of the brain's frontal lobes, say researchers. Research into the comparative size of the frontal lobes in humans and other species has determined that they are not -- as previously thought -- disproportionately enlarged relative to other areas of the brain, according to the most accurate and conclusive study of this area of the brain. It concludes that the size of our frontal lobes cannot solely account for humans' superior cognitive abilities. The study by Durham and Reading universities suggests that supposedly more 'primitive' areas, such as the cerebellum, were equally important in the expansion of the human brain. These areas may therefore play unexpectedly important roles in human cognition and its disorders, such as autism and dyslexia, say the researchers. The study is published in the Proceedings of the National Academy of Sciences ( PNAS ) today.

The Neurocritic Technology - Will we ever… have cyborg brains? After recent triumphs showing that implants could repair lost brain function, Martin W. Angler explores how soon we can use this technology for creating enhanced humans. For the first time in over 15 years, Cathy Hutchinson brought a coffee to her lips and smiled. In both cases the implants convert brain signals into digital commands that a robotic device can follow. Yet it’s still a far cry from the visions of man fused with machine, or cyborgs, that grace computer games or sci-fi. Creating implants that improve cognitive capabilities, such as an enhanced vision “gadget” that can be taken from a shelf and plugged into our brain, or implants that can restore or enhance brain function is understandably a much tougher task. Mind switch The media proclaimed this achievement as being an “artificial cerebellum“ and a “cyborg rat“. In September this year, American scientists said they had created a way of enhancing a monkey’s decision making by about 10%. Unwanted reactions

Your brain on improv: Charles Limb on TED.com Live from TED2014 A first dance, on a next-generation bionic limb: Hugh Herr and Adrianne Haslet-Davis at TED2014 Hugh Herr, director of the Biomechatronics Group at The MIT Media Lab, strolls onto the TED2014 stage in a pair of long, black shorts. Culture When self-identity can change: Q&A with Charles Limb This morning’s TED Talk from Andrew Solomon asks a deep question about parents and children.