Crisis Communications: Are you ready for the unexpected? Crisis Guru. By James E. 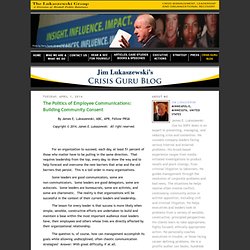 Lukaszewski, ABC, APR, Fellow PRSA For an organization to succeed, each day, at least 51 percent of those who matter have to be pulling in the same direction. That requires leadership from the top, every day, to show the way and to help forecast and overcome the new barriers that arise and the old barriers that persist. This is a tall order in many organizations.

Some leaders are good communicators, some are non-communicators. The lesson for every leader is that success is more likely when simple, sensible, constructive efforts are undertaken to build and maintain a base within the most important audience most leaders have, their employees and others whose lives are directly affected by their organizational relationship. The question is, of course, how can management accomplish its goals while allowing undisciplined, often chaotic communication strategies? We begin the process of base building using the Ridgeway Audience Issue Analysis model. 1. 2. 3. 4. 5. TOP TIPS: The 10-point guide to effective employee communication during a company crisis. Gaming is serious business at ISS, one of the world’s leading integrated facility service companies. 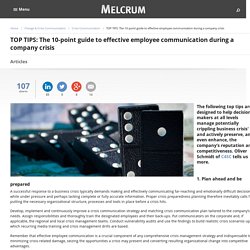 The service giant, which has more than half a million employees, is increasingly using games to engage its people in strategy, innovation, team-building and creating new business opportunities. Kenth Kærhøg, Head of Group Communications at ISS A/S, explains more. Everybody understands that strategies and business priorities can be launched in traditional ways - slide-decks with a lot of buzzwords, technical and financial terms, graphs and numbers; a series of intranet articles; and maybe a folder with the main points distilled and visualized. The effect of such communication in terms of understanding, engagement and commitment can sometimes be moderate at best - and potentially abstract and impersonal. Adding the human touch. Crisis Communications from the Inside Out by @spindochu Spin Sucks.

By: Kornel Bohm | March 30, 2015 | By Kornel Bohm We often focus only on the external side of crisis communications, however the internal component is just as, if not more, important…and often overlooked. 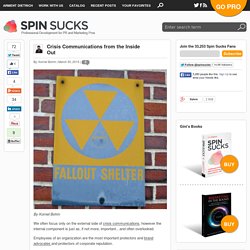 Employees of an organization are the most important protectors and brand advocates and protectors of corporate reputation. It is they who—with their hands-on presence, call center activity, and use of social media—personify the company in the eyes of the public opinion. Whether you like it or not, employees are a major component of any crisis communications. Dedicated Employees are the Most Valuable Assets during a Crisis. Although most crisis communication research focuses on external stakeholders’ communicative behavior, some recent academic and professional studies have recognized the value and importance of employee communication in a crisis. 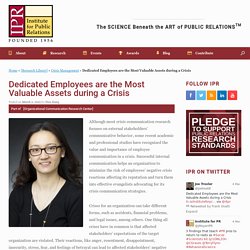 Successful internal communication helps an organization to minimize the risk of employees’ negative crisis reactions affecting its reputation and turn them into effective evangelists advocating for its crisis communication strategies. Crises for an organization can take different forms, such as accidents, financial problems, and legal issues, among others. How America's Health Care System Could Benefit From Ebola. One of the biggest humanitarian tragedies in 2014 has been the Ebola epidemic, which to date has infected 17,942 people and killed 6,388. 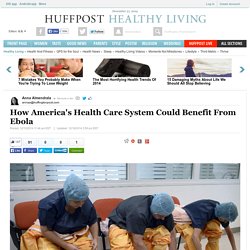 The epidemic continues in West Africa, and there is no doubt it will impact the governments, economies and people of Sierra Leone, Liberia and Guinea for years to come. But while Ebola has affected the U.S. in a much smaller way, the handful of cases that arrived here may also have an enduring impact on the U.S. health care system. When Ebola first came to the U.S., hospitals struggled to ready themselves for the threat. Indeed, a major part of the scramble to care for Ebola patients focused on compensating for a lack of training. Early in December, the U.S. Now that Ebola appears to be subsiding as an immediate global threat, the federal government hopes this hospital network will play a larger role as the first line of defense against future diseases. How Internal Communication can guide employees through major crisis. Look to the future Want more insights like this? 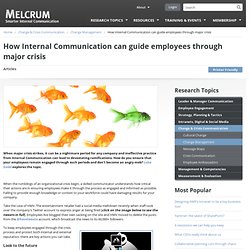 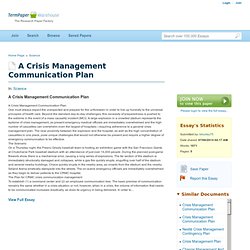 Beyond the standard day-to-day challenges, this necessity of preparedness is pushed to the extreme in the event of a mass causality incident (MCI). A large explosion in a crowded stadium represents the epitome of crisis management, as present emergency medical officials are immediately overwhelmed and the high number of casualties can overwhelm even the largest of hospitals—requiring adherence to a general crisis management plan. The near proximity between the explosion and the hospital, as well as the high concentration of casualties in one place, pose unique challenges that would not otherwise be present and require a higher degree of emergency communication to be effective.

As brand ambassadors (and often customers, too), employees need to know and understand what actions the company is taking to fix the situation as well as what their role(s) might be in a crisis situation. Whether or not you agree with how GM is handling its ignition switch recall, it appears that CEO Mary Barra is taking steps to keep its employees updated on the situation as seen in this internal video to update employees. Using Social Media as a Digital Life Preserver in Crisis CommunicationsPR News. Three key principles for employee communication during a crisis. This column is part of Globe Careers’ Leadership Lab series, where executives and experts share their views and advice about leadership and management. 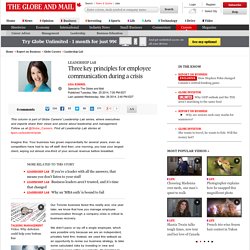 Follow us at @Globe_Careers. Find all Leadership Lab stories at tgam.ca/leadershiplab Imagine this: Your business has grown exponentially for several years, even as competitors have had to lay off staff. Crisis Communications: When Social Media is Mandatory, When it is Optional, and When it is Useless in a Crisis. In Times of Crisis, Employees Need More than Press Statements from Leadership - STARKMAN. The cover of Harvard Business Review’s January-February issue focuses on building high-performance cultures, ones that tend to be deemed a “great place to work.” 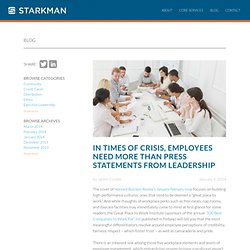 And while thoughts of workplace perks such as free meals, nap rooms, and daycare facilities may immediately come to mind at first glance for some readers, the Great Place to Work Institute (sponsors of the annual “100 Best Companies to Work For” list published in Fortune) will tell you that the most meaningful differentiators revolve around employee perceptions of credibility, fairness, respect – which foster trust – as well as camaraderie and pride. There is an inherent link among those five workplace elements and levels of employee engagement, which research has proven to have a profound impact on financial and operational performance. Crisis Management Musts: Employee Communication. When it’s time to go into full-on crisis management mode, many organizations are focused purely on A) cleaning up the situation, and B) communicating with outside stakeholders, whether that means customers, investors or the media. 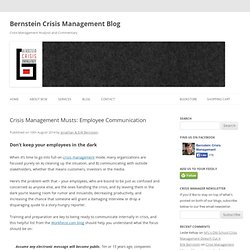 Here’s the problem with that – your employees, who are bound to be just as confused and concerned as anyone else, are the ones handling the crisis, and by leaving them in the dark you’re leaving room for rumor and innuendo, decreasing productivity, and increasing the chance that someone will grant a damaging interview or drop a disparaging quote to a story-hungry reporter. Training and preparation are key to being ready to communicate internally in crisis, and this helpful list from the Workforce.com blog should help you understand what the focus should be on: Assume any electronic message will become public. Effective Employee Communication in Times of Crisis. By Oliver Schmidt Crises for a company can take many forms.

But whether they are accidental, financial, legal, or otherwise, there is one thing that all affected companies have in common: a critical need for a successful managerial and operational response as well as effective communication with both external and internal stakeholders. Over the past two decades a growing number of companies have developed and critically improved their customized approaches to communicating with external stakeholders in the event of a crisis. However, far too many companies still either do not realize or fail to act upon the fact that effective employee communication is also crucial to managing business crises. Communicating in Times of Crisis: HR's Role. On behalf of everyone at ERC, our thoughts are with all those affected both nationally and locally by Hurricane Sandy earlier this week. The recent events of the past few days are an unfortunate reminder to all HR professionals and business leaders that natural disasters, power outages, and issues with transportation systems can emerge at any time and have implications on the workplace.

Crisis control: how HR departments can coordinate employees in an emergency. Many companies were affected by the events of the Arab Spring, the extreme flooding in Pakistan, the earthquakes in Japan and New Zealand, flooding in Brisbane, hurricane Irene in the US, and the multitude of other significant political and environmental events that occurred in 2011. During these events, companies were forced to evaluate their security processes and their means of communication with employees. For many companies these incidents highlighted that current processes for accounting for staff during a crisis were slow and inefficient. In particular, these dramatic events have caused an HR challenge: how do HR departments ensure they account for their employees, communicate with them and coordinate a coherent and comprehensive response for those in need of help? Quickly establishing the location and status of all employees is the first stage towards organising a response to a critical incident such as the Fukushima earthquake.

Internal Crisis Communications. Cartoon: A Thicker Skin. Infographic: The Social Media Crisis Communications Decision Tree. Lessons in clear and authentic communication following the Christchurch earthquake. Twitter and natural disasters: lessons from Japan. Researchers from Kobe City University of Foreign Studies surveyed and questioned Twitter users and tracked updates from people in the disaster-struck area on the social media site two weeks after the Tohoku earthquake and devastating tsunami of 11 March; Twitter was the only functioning communication tool immediately after the earthquake; the researchers found that there benefits for using Twitter, such as bringing information to people involved in a disaster and to those hoping to hear news; there was a downside, though: Twitter helped spread unverified rumors and misinformation, causing people to panic in areas where there was no reason to panic, thus making the work of rescuers and service authorities more difficult; one solution: have the government itself use Twitter to offer reliable information to all involved The 9.0-scale earthquake that hit Japan on 11 March at 2:45 p.m.

Effective employee communication in times of crisis: Recover and rebuild after a disaster: Part 3. Cats Guide to Internal Comms: Message cut through for critical communications. When Natural Disasters Strike, Touch Base Regularly With Employees. Hurricane Irene and Tuesday’s East Coast earthquake are critical reminders of the importance of timely communication among managers and their employees. It’s imperative to regularly connect with those in the workplace and especially remote employees, who are traveling, home based or working at remote sites when natural disasters hit or are looming. The connection should be two-way, enabling outgoing messages to be aired and incoming feedback to be received and responded to. Here are tips for keeping the lines of communication active and open during a disaster: No. 1: Take down silos. Natural disasters are times for teamwork – not bickering and tension.

No. 2: Create an action plan. Social Media as a Crisis Communication Tool during the Icelandic Vo... Ebola: the internal communication challenge.