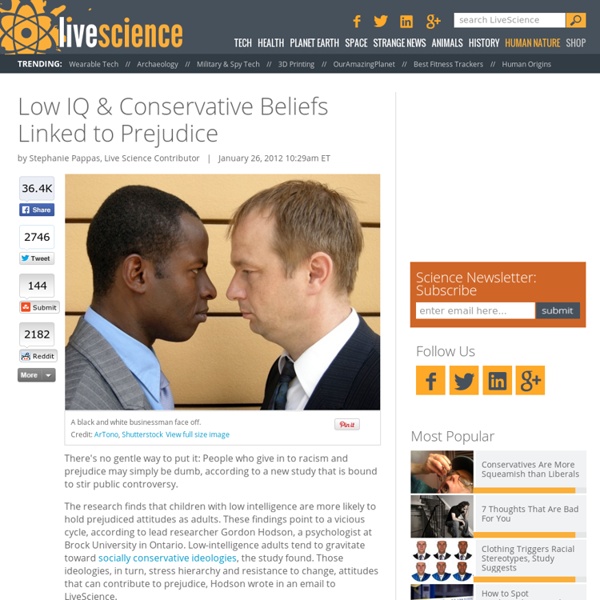 There's no gentle way to put it: People who give in to racism and prejudice may simply be dumb, according to a new study that is bound to stir public controversy. The research finds that children with low intelligence are more likely to hold prejudiced attitudes as adults. These findings point to a vicious cycle, according to lead researcher Gordon Hodson, a psychologist at Brock University in Ontario. Low-intelligence adults tend to gravitate toward socially conservative ideologies, the study found. Those ideologies, in turn, stress hierarchy and resistance to change, attitudes that can contribute to prejudice, Hodson wrote in an email to LiveScience. "Prejudice is extremely complex and multifaceted, making it critical that any factors contributing to bias are uncovered and understood," he said. Controversy ahead The findings combine three hot-button topics. Brains and bias As suspected, low intelligence in childhood corresponded with racism in adulthood. A study of averages

What Is Extreme Democracy? "Extreme democracy" is a political philosophy of the information era that puts people in charge of the entire political process. It suggests a deliberative process that places total confidence in the people, opening the policy-making process to many centers of power through deeply networked coalitions that can be organized around local, national and international issues. The choice of the word "extreme" reflects the lessons of the extreme programming movement in technology that has allowed small teams to make rapid progress on complex projects through concentrated projects that yield results far greater than previous labor-intensive programming practices. Extreme democracy is not direct democracy, which assumes all people must be involved in every decision in order for the process to be just and democratic.

Is Google Making Us Stupid? - Nicholas Carr Illustration by Guy Billout "Dave, stop. Stop, will you? Stop, Dave. Will you stop, Dave?” Localism: An Alternative to Globalisation 28 March, 2012 Sustainable Economy: Keeping Wealth (Wellbeing) In Our Families And Communities By Bryan Innes Before industrialisation, economy mainly referred to local economy and household economy, based on cooperative and competitive processes. Portal:Politics From Wikipedia, the free encyclopedia Politics are the process and method of gaining or maintaining support for public or common action: the conduct of decision-making for groups. Although it is usually applied to governments, political behavior is also observed in corporate, academic, religious, and other institutions. Political science is the field devoted to studying political behavior and examining the acquisition and application of power, or the ability to impose one's will on another. Its practitioners are known as political scientists. Political scientists look at elections, public opinion, institutional activities (how legislatures act, the relative importance of various sources of political power), the ideologies behind various politicians and interest groups, how politicians achieve and wield their influence, and so on.

Category:Political philosophy For similar topics see the following categories also: Subcategories This category has the following 47 subcategories, out of 47 total. List of political ideologies Political ideologies have two dimensions: Goals: How society should be organized.Methods: The most appropriate way to achieve this goal. An ideology is a collection of ideas. Typically, each ideology contains certain ideas on what it considers to be the best form of government (e.g. democracy, autocracy, etc.), and the best economic system (e.g. capitalism, socialism, etc.).

Category:Political systems A political system is a system of politics and government. It is usually compared to the law system, economic system, cultural system, and other social systems. See also: Subcategories Category:Political theories From Wikipedia, the free encyclopedia Subcategories This category has the following 41 subcategories, out of 41 total. Pages in category "Political theories" Imagining Collectively Intelligent Communitie The Co-Intelligence Institute CII home // CIPolitics home When I imagine visiting some idealized collectively intelligent community of the future, I come up with something like the following. This vision is only one of many that are possible -- some of which would undoubtedly be even more co-intelligent. This particular vision is shaped by my own perspective and experience (you can tell I love good meetings!). Your vision would undoubtedly be very different from mine -- and I encourage you to explore what it would be like.