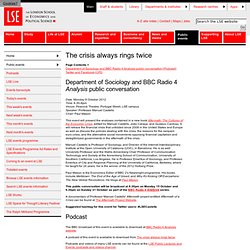 How did we get here? perspectives... 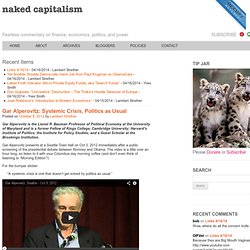 Bauman Professor of Political Economy at the University of Maryland and is a former Fellow of Kings College, Cambridge University; Harvard’s Institute of Politics; the Institute for Policy Studies; and a Guest Scholar at the Brookings Institution. Gar Alperovitz presents at a Seattle Town Hall on Oct 3, 2012 immediately after a public screening of the presidential debate between Romney and Obama. The video is a little over an hour long; so listen to it with your Columbus day morning coffee (and don’t even think of listening to “Morning Edition”!) For the bumper sticker: “A systemic crisis is one that doesn’t get solved by politics as usual.” One quote: The top 400 people — individuals, 400 people, you could get them into this space if you squeezed them just a little bit — have more wealth now than the bottom 180 million Americans taken together.

Upsurge in Movements Around the Globe: 1968 Redux? Special talk by Immanuel Wallerstein, distinguished scholar and author of the essential “The Modern World System,” a classic three volume study of the emergence of capitalism, which has recently been republished alongside a brand new fourth volume. 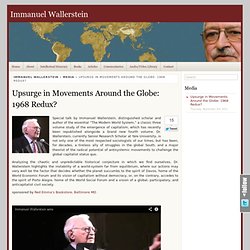 Dr. Wallerstein, currently Senior Research Scholar at Yale University, is not only one of the most respected sociologists of our times, but has been, for decades, a tireless ally of struggles in the global South, and a major theorist of the radical potential of antisystemic movements to challenge the global capitalist status quo. Analyzing the chaotic and unpredictable historical conjecture in which we find ourselves, Dr. Sponsored by Red Emma’s Bookstore, Baltimore MD. Journal of Critical Globalisation Studies. The Idea of Crisis.

3 US charts 1960 to 2012: profits, wages and taxes. Home > The Economy > 3 US charts 1960 to 2012: profits, wages and taxes from David Ruccio source The national income accounts may have been revised (changing, among other things, the way research and development and pensions are treated) but the results remain roughly the same: corporate profits after taxes amounted to a record 9.7 percent of GDP (meaning that in each of the last three years it has been higher than the earlier record high, of 9.1 percent, which was set in 1929) and that wages and salary income in 2012 amounted to 44 percent of GDP (the lowest at any time since 1929). 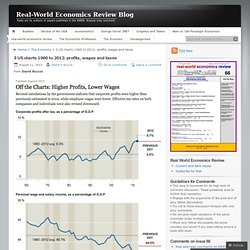 “Profitless” Stocks, Underinvestment, the Cannibalization of Labor, and Levitating Stock Prices. Your humble blogger generally refrains from writing about stocks for a host of reasons. 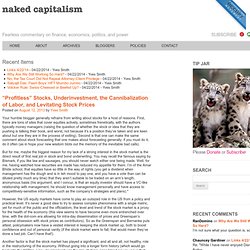 First, there are tons of sites that cover equities actively, sometimes frenetically, with the authors typically money managers (raising the question of whether the stock or idea that they are pushing is talking their book, and worst, not because it’s a position they’ve taken and are keen about but one they are in the process of exiting).

Second is that one can make the same comment about stock forecasting that one makes about forecasting generally: if you must do it, do it often (as in hope your new wisdom blots out the memory of the inevitable bad calls). But for me, maybe the biggest reason for my lack of a strong interest in the stock market is the direct result of first real job in stock and bond underwriting. You may recall the famous saying by Bismark, if you like law and sausages, you should never watch either one being made. And it’s even worse than this bloodless analysis suggests. The Crisis of Global Capitalism: ten years on.