The Science of Why We Don't Believe Science 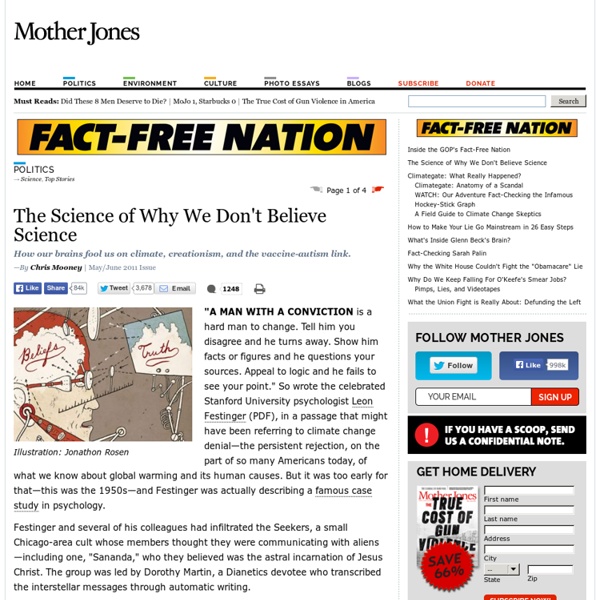 Illustration: Jonathon Rosen "A MAN WITH A CONVICTION is a hard man to change. Tell him you disagree and he turns away. Show him facts or figures and he questions your sources. Appeal to logic and he fails to see your point." So wrote the celebrated Stanford University psychologist Leon Festinger (PDF), in a passage that might have been referring to climate change denial—the persistent rejection, on the part of so many Americans today, of what we know about global warming and its human causes. Festinger and several of his colleagues had infiltrated the Seekers, a small Chicago-area cult whose members thought they were communicating with aliens—including one, "Sananda," who they believed was the astral incarnation of Jesus Christ. Through her, the aliens had given the precise date of an Earth-rending cataclysm: December 21, 1954. Festinger and his team were with the cult when the prophecy failed. Read also: the truth about Climategate.At first, the group struggled for an explanation.

"Pro-American" History Textbooks Hurt Native Americans  I teach Native American Studies and virtually none of my university students has had any education whatsoever in the history of this country's treatment of the 10 million or so people who lived here before Europeans arrived. They generally believe that the continent was more or less wide-open and that the few people who were here aided the Pilgrims with a harvest fest and then after a few skirmishes with settlers complied with their destiny as the vanishing Indian. The Texas State Board of Education wants to reinforce this knowledge gap, forcing Texas high schoolers to learn a sanitized version of U.S. history in the name of being "pro-American." The Texas board recently voted to allow state-defined curriculum for the Advanced Placement History Exam to trump that of the federally-defined curriculum on which the exam will be based in order to sidestep aspects of U.S. history they find distasteful.

Generalised problems kill startups It’s crazy how often I hear founders say ‘I think the problem we’re really solving is X’. Hang on a second… You ‘think’? The surprising thing is that if you forgot temporarily why you started your business, you’re not alone. What does a doodle do? It boosts your memory and concentration You know you're bored when you start shading in the squares of your notebook. Apparently it's a habit that could be helping you to concentrate. In a neat little experiment, Jackie Andrade asked forty participants to listen to a monotone two and a half minute phone message about arrangements for a party. They were told the message would be dull, that there was no need to memorise it, but that they should write down the names of the people who would be able to attend the party.

Why Did Consciousness Evolve, and How Can We Modify It? Update 5/24/11: The conversation continues in Part II here. I recently gave a talk at the Directors Guild of America as part of a panel on the “Science of Cyborgs” sponsored by the Science Entertainment Exchange. It was a fun time, and our moderators, Josh Clark and Chuck Bryant from the HowStuffWorks podcast, emceed the evening with just the right measure of humor and cultural insight. Why You Can’t Trust Yourself - Mark Manson - Pocket Bertrand Russell famously said, “The whole problem with the world is that fools and fanatics are so certain of themselves and wiser people so full of doubts.” Over the years, I’ve hammered on the importance of becoming comfortable with uncertainty and ambiguity, in questioning all of your most cherished beliefs and dreams, on practicing skepticism, and doubting everything, most importantly yourself. Throughout these posts, I’ve hinted at the fact that our brains are fundamentally unreliable, that we really have no clue what we’re talking about, even when we think we do, and so on. But I’ve never given concrete examples or explanations. Well, here they are.

This Columbus Day, Seeking the Real History of Native Americans  A Q&A with Roxanne Dunbar-Ortiz, author of An Indigenous Peoples' History of the United States. By Mark Trecka CHICAGO -- When Howard Zinn published A People's History of the United States in 1980, historian and activist Roxanne Dunbar-Ortiz told Zinn that he had largely failed to include the narratives of Native Americans. Zinn replied that it was up to Dunbar-Ortiz to write that book. Brain Parts Function The brain is the most complex organ in the body. It is the organ that allows us to think, have emotions, move, and even dream. Given this complexity, it should not be surprising that there are many ways to separate the parts of the brain. Brain parts can be separated on the basis of what they look like to the naked eye, under a microscope, or by what certain brain parts do.

Fast-Evolving Brains Helped Humans out of the Stone Age Just like our animal skin–clad ancestors, we gather food with zeal, lust over the most capable mates, and have an aversion to scammers. And we do still wear plenty of animal skins. But does more separate us from our Stone Age forebears than cartoonists and popular psychologists might have us believe?