Why Too Much Data Disables Your Decision Making 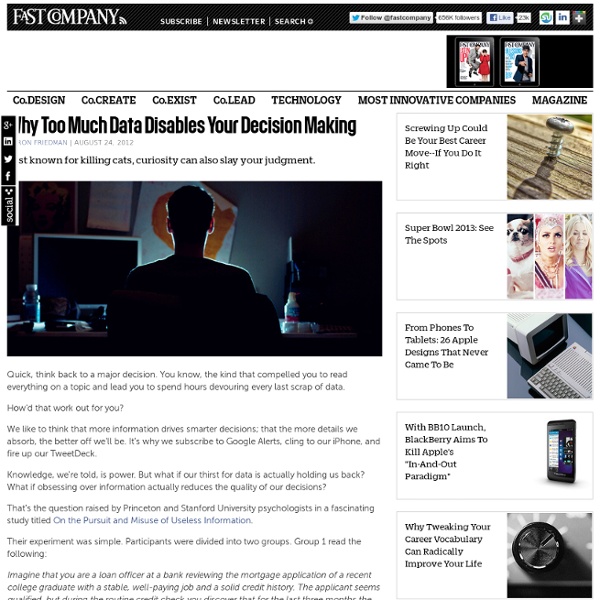 Quick, think back to a major decision. You know, the kind that compelled you to read everything on a topic and lead you to spend hours devouring every last scrap of data. How'd that work out for you? We like to think that more information drives smarter decisions; that the more details we absorb, the better off we'll be. Knowledge, we're told, is power. That's the question raised by Princeton and Stanford University psychologists in a fascinating study titled On the Pursuit and Misuse of Useless Information. Their experiment was simple. Imagine that you are a loan officer at a bank reviewing the mortgage application of a recent college graduate with a stable, well-paying job and a solid credit history. Group 2 saw the same paragraph with one crucial difference. Here's where the study gets clever. The result? To say the findings are surprising is to state the obvious. The answer underscores a troubling blind spot in the way we make decisions. Remember Seinfeld and Friends?

Video: How Steve Jobs's Early Vision For Apple Inspired A Decade Of Innovation Eds. Note: Steve Jobs, co-founder of Apple, has passed away at the age of 56, leaving behind a larger-than-life legacy which no obituary could possibly capture. As colleagues and family members and all those who he inspired begin to reflect on his life and impact, it's impossible not to do so without feeling an almost shared sadness, as if the world is collectively mourning the loss of a close relative--even if most of us weren't fortunate to meet him. We all knew this day was coming, but we can't believe it came so soon. Simply put, Steve Jobs made our lives better, and the world is a worse place without his presence and vision. Steve Jobs's return to Apple in 1997 is often referred to as the greatest second act in business history. That all changed when Jobs came back, and breathed new life into the struggling company. But to get to that point, Jobs had to do more than introduce flashy products. Responding To Critics Focusing On Saying No "Focusing is saying yes, right? The Digital Hub

Astronomy: Planets in our galaxy may be vastly more numerous than believed - latimes.com The Milky Way galaxy may be filled with millions upon millions of Jupiter-sized planets that have escaped their solar systems and are wandering freely in space, researchers said Wednesday in a finding that seems certain to make astronomers rethink their ideas about planetary formation. Scientists had previously thought that about 20% of stars had massive planets attached to them, but the new results reported in the journal Nature suggest that there are at least twice as many planets as stars, and perhaps several times as many. The finding "is a revelation in the sense that it looks like a quintupling of the number of gas giants in the universe," said astronomer Alan Boss of the Carnegie Institution for Science, who was not involved in the research. The discoverers of the wandering planets speculate that the orphan bodies were ejected from formative solar systems soon after they condensed from the interstellar dust that also formed the stars. thomas.maugh@latimes.com

What Successful People Do With The First Hour Of Their Work Day Remember when you used to have a period at the beginning of every day to think about your schedule, catch up with friends, maybe knock out a few tasks? It was called home room, and it went away after high school. But many successful people schedule themselves a kind of grown-up home room every day. You should too. The first hour of the workday goes a bit differently for Craig Newmark of Craigslist, David Karp of Tumblr, motivational speaker Tony Robbins, career writer (and Fast Company blogger) Brian Tracy, and others, and they’ll tell you it makes a big difference. Don’t Check Your Email for the First Hour. Tumblr founder David Karp will "try hard" not to check his email until 9:30 or 10 a.m., according to an Inc. profile of him. Not all of us can roll into the office whenever our Vespa happens to get us there, but most of us with jobs that don’t require constant on-call awareness can trade e-mail for organization and single-focus work. Gain Awareness, Be Grateful Choose Your Frog

Task & Errand Service By Awesome, Trustworthy People | TaskRabbit Finding 'Life, Death And Hope' In A Mumbai Slum Next to Mumbai's bustling international airport, a boy picks through refuse, looking for pieces he can recycle and sell to support his family of 11. He is a resident of Annawadi, a slum built on a patch of reclaimed swampland — now fringed by luxury hotels. As economists and activists fret over increasing income inequality in America, scenes like this one from journalist Katherine Boo's new book, Behind the Beautiful Forevers, are a forceful reminder of the extreme disparity of wealth that exist all over the world — and what people must do to survive. Boo, a Pulitzer Prize-winner who earned acclaim for her pieces on poverty in America, became a regular visitor to Mumbai after she married a man from India. "When a kid like Abdul ... is supporting a family of 11 by buying and selling the things that richer people throw away ... you don't say, 'Oh yeah, well, I'm gonna go home now and go to Whole Foods and buy some cheese.' Heleen Welvaart

Scientists create light from vacuum (PhysOrg.com) -- Scientists at Chalmers University of Technology have succeeded in creating light from vacuum – observing an effect first predicted over 40 years ago. The results will be published tomorrow (Wednesday) in the journal Nature. In an innovative experiment, the scientists have managed to capture some of the photons that are constantly appearing and disappearing in the vacuum. The experiment is based on one of the most counterintuitive, yet, one of the most important principles in quantum mechanics: that vacuum is by no means empty nothingness. Chalmers scientist, Christopher Wilson and his co-workers have succeeded in getting photons to leave their virtual state and become real photons, i.e. measurable light. “Since it’s not possible to get a mirror to move fast enough, we’ve developed another method for achieving the same effect,” explains Per Delsing, Professor of Experimental Physics at Chalmers. Explore further: What does physics reveal about the sizes of sports fields?

A Seven-Step Framework for Developing Business | Solo, Small Firm and General Practice Division Lawyers are always seeking ways to get more business. Having a framework to approach business development may help. Here is one I have used and enhanced with my coaching clients for the last 15 years. Although some specific activities have changed—since social media developments and increased competition—the basic approach remains the same. If you don’t know where you are going, how will you get there? Here are some examples of common business goals that many of my clients have: a. b. c. d. e. f. Decide on your goals, and don’t be afraid to have some stretch goals, such as starting a blog, or speaking regularly, or spending 5–10 hours a week on business development meetings and calls. Goals are not the plan of how you are going to get there: they are what you are working to accomplish. For example, a plan to talk with a specific person might include how you will approach that person, and when. To implement the plan, you may want to create some accountability. a. b. c. d. e. a. b. c. d.

How to run a problem-solving meeting This is a special sort of get together, similar to the meeting where you organize people to figure out the best way to take advantage of an opportunity. In both cases, amateurs usually run the meetings, and the group often fails to do their best work. Ignore these rules at your peril: Only the minimum number of people should participate. Don't invite anyone for political reasons.

Q&A with Katherine Boo, Author of Behind the Beautiful Forevers Bill Gates: How did you pick the particular slum and the people that you profiled in the book? Katherine Boo: Although I’d been spending time in slums all over Mumbai, I kept gravitating to Annawadi because of the hope there. In 2008, preventable disease was rampant and only six of 3,000 residents had permanent work, but the place was still frantic with the optimism and entrepreneurial energy you noted in your review. By scavenging and selling recyclable garbage, hawking marigold garlands in traffic, picking up day jobs at construction sites, and identifying other market niches in the prospering airport area, nearly every family in the slum had crossed the Indian government’s poverty line, if not the World Bank benchmark. One young woman, Manju Waghekar, was poised to become the slum’s first female college graduate. In other words, the Annawadians were no longer just subsisting. That’s not to say that Annawadi is a perfect microcosm or “representative” slum.

"Higgs Boson Will Unlock Great Mysteries of the Universe" --Era of New Physics Looming (Weekend Feature) Scientists hailed the announcement, speculating that it could one day make light speed travel possible by "un-massing" objects or allow huge items to be launched into space by "switching off" the Higgs.* CERN scientist Albert de Roeck likened it to the discovery of electricity, when he said humanity could never have imagined its future applications. "What's really important for the Higgs is that it explains how the world could be the way that it is in the first millionth of a second in the Big Bang," de Roeck told AFP.* "Can we apply it to something? At this moment my imagination is too small to do that." Physicist Ray Volkas said "almost everybody" was hoping that, rather than fitting the so-calledStandard Model of physics -- a theory explaining how particles fit together in the Universe -- the Higgs boson would prove to be "something a bit different". The Daily Galaxy via 2012 AFP

Bad Service Can Be Good Business - Bill Taylor by Bill Taylor | 9:30 AM August 8, 2012 It’s hard not to be surprised by what you read in the newspapers these days, but a recent report in the New York Times left me downright floored. Richard Bove, a high-profile securities analyst who focuses on bank stocks, wrote a commentary that excoriated Wells Fargo for lousy service — so much so that he announced he’d moved his business to a different bank. Bove’s basic argument? Fair enough, let’s rethink. But there is a method to the no-frills madness of CEO Michael O’Leary and his colleagues. You don’t have to like Ryanair to love its strategic confidence — and to understand why it treats customers the way it does. There’s a second category of companies for whom lousy service may be good business — companies whose offerings are so compelling, and whose reach is so vast, that making the investments required to deliver high-touch service would be making a big strategic mistake. But back to Richard Bove.