Alison Gopnik: What do babies think? 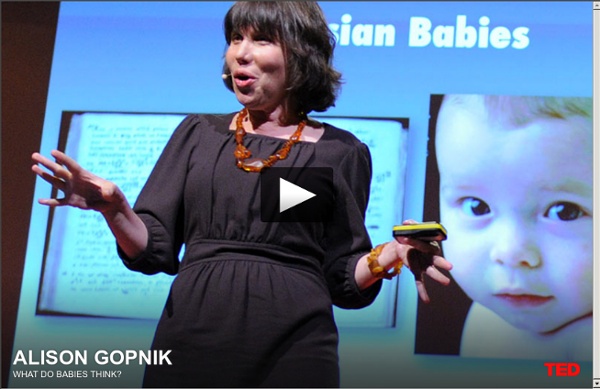 Disrupting Class by Clayton Christensen The way we learn doesn’t always match up with the way we are taught. If we hope to stay competitive– academically, economically, and technologically–we need to reevaluate our educational system, rethink our approach to learning, and reinvigorate our commitment to learning. In other words, we need disruptive innovation. Clayton M. "After a barrage of business books that purport to 'fix' American education, at last a book that speaks thoughtfully and imaginatively about what genuinely individualized education can be like and how to bring it about." Howard GardnerAuthor of Five Minds for the Future Organizing the bookcase - from dull task to awesome stop motion This video proves, once and for all, that making a stop motion video is the most fun you can have when you are alone with your camera. You don’t need any sort of fancy equipment or special skills, you just need a tripod, a camera, and a lot of time. The video above isn’t a technical marvel by any stretch of the imagination, but it is clever and fun to watch. Some great guitar doesn’t hurt at all either. What I really like about this video is its simplicity. via buzzfeed

Why first impressions are so persistent New research by a team of psychologists from Canada, Belgium, and the United States shows there is more than a literal truth to the saying that 'you never get a second chance to make a first impression'. The findings suggest that new experiences that contradict a first impression become 'bound' to the context in which they were made. As a result, the new experiences influence people's reactions only in that particular context, whereas first impressions still dominate in other contexts. "Imagine you have a new colleague at work and your impression of that person is not very favourable" explains lead author Bertram Gawronski, Canada Research Chair at The University of Western Ontario. "A few weeks later, you meet your colleague at a party and you realize he is actually a very nice guy. According to Gawronski, our brain stores expectancy-violating experiences as exceptions-to-the-rule, such that the rule is treated as valid except for the specific context in which it has been violated.

Myths about our minds 8 November 2011Last updated at 00:29 By Andrew Luck-Baker Producer, Radio 4's Mind Myths The human brain is the most complex entity in the known universe and despite the best endeavours of scientists, there are still many mysteries about the 1.5kg (3.3lb) crinkled blob between our ears. Here are just a few of the many myths about our brains and how they work. The brain scan put pay to the myth we only use one 10th of our brains I remember first hearing that we used just a 10th of our brains in the 1970s when I was at school. And how amazing, I thought, that there might be a way to unlock that whopping 90% of unused brain capacity. What would not be possible with all of my grey matter in action? It was nonsense back then, and technological leaps in brain scanning has now proved this for all to see. Even doing something simple, such as clenching your fist, uses much more than 10% of the brain. Anatomically, the brain is divided into two halves - the left hemisphere and the right one.

Christopher Alexander Christopher Alexander is Professor Emeritus of Architecture at the University of California, Berkeley, best known for his seminal works on architecture including A Pattern Language, Notes on the Synthesis of Form, and The Nature of Order, Volumes I-IV. He is the father of the Pattern Language movement in computer science, and A Pattern Language was perhaps the first complete book ever written in hypertext fashion. He has designed and built more than two hundred buildings on five continents: many of these buildings lay the ground work of a new form of architecture, which looks far into the future, yet has roots in ancient traditions. He was the founder of the Center for Environmental Structure in 1967, and remains President of that Company until today. He was born in Vienna, Austria in 1936. In 1958 he moved to the United States, and lived in Berkeley, California from 1963 until 2002; in 2002, he moved back to West Sussex, England, where he now resides.

Why Fireworks Are Illegal In Some Places Categories February 15, 2011 2:00pm By Rowdy Joe Videos Why Fireworks Are Illegal In Some Places I think they're supposed to go a little bit higher before they explode! Another Bike Jump Epic Fail Playground Swing Fail Comments haha lol wtf fail awesome idiots morons explosion firework Related Posts Recommended Posts Tacit Knowledge and the Student Researcher I’m old enough that the annual Beloit Mindset List (created to help instructors avoid making what they think are contemporary cultural references that are actually historical to their students) is full of references to things that I never got around to knowing before they became passé. I’ve started compiling a different list, one that identifies the tacit knowledge many of us have about information and how it works based on experiences that our students haven’t had. Here’s what I have so far. Journals and magazines are published as ongoing series. For those of us who remember print, articles are bundled into issues, issues into volumes, and every year more articles are published in these bundles. News is different than opinion. Books don’t have to be read cover-to-cover to be useful. Citations have the information you need to track down the source. Databases and catalogs (usually) don’t search inside books and articles. Catalogs are (usually) local; article databases (usually) aren’t.

Future - Health - The neurons that shaped civilization Synopsis Neuroscientist Vilayanur Ramachandran outlines the fascinating functions of mirror neurons. Only recently discovered, these neurons allow us to learn complex social behaviors, some of which formed the foundations of human civilization as we know it. About the Speaker VS Ramachandran is a mesmerizing speaker, able to concretely and simply describe the most complicated inner workings of the brain. Ramachandran is the director of the Center for Brain and Cognition at the University of California, San Diego, US, and an adjunct professor at the Salk Institute. A Pattern Language A Pattern Language: Towns, Buildings, Construction is a 1977 book on architecture, urban design, and community livability. It was authored by Christopher Alexander, Sara Ishikawa and Murray Silverstein of the Center for Environmental Structure of Berkeley, California, with writing credits also to Max Jacobson, Ingrid Fiksdahl-King and Shlomo Angel. Decades after its publication, it is still one of the best-selling books on architecture.[1] The book creates a new language, what the authors call a pattern language derived from timeless entities called patterns. As they write on page xxxv of the introduction, "All 253 patterns together form a language." It includes 253 patterns such as Community of 7000 (Pattern 12) given a treatment over several pages; page 71 states: "Individuals have no effective voice in any community of more than 5,000-10,000 persons." According to Alexander & team, the work originated from an observation that References[edit] External links[edit]