Boing Boing - Our most-shared post here on Facebook today. "A reason to hang him": how mass surveillance, secret courts, confirmation bias and the FBI can ruin your life. Brandon Mayfield was a US Army veteran and an attorney in Portland, OR. 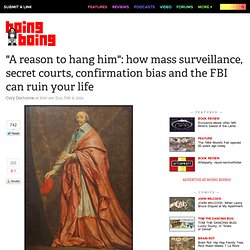 After the 2004 Madrid train bombing, his fingerprint was partially matched to one belonging to one of the suspected bombers, but the match was a poor one. But by this point, the FBI was already convinced they had their man, so they rationalized away the non-matching elements of the print, and set in motion a train of events that led to Mayfield being jailed without charge; his home and office burgled by the FBI; his client-attorney privilege violated; his life upended.

At every turn, the FBI treated evidence that contradicted their theory as evidence that confirmed it. Mayfield's passport had expired and he couldn't possibly have been in Madrid? Proof that he was a terrorist: he must be using his connections with Al Qaeda to get false papers so that his own passport isn't recorded as crossing any borders. The FBI was so sure of their theory that they lied to a judge during their campaign against him. 6 mans written by an honest man & a reason to hang him. About, sixlines.org. Six Lines is a blog about computer security, digital privacy, and technology policy by Aaron Massey. 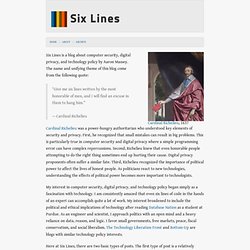 The name and unifying theme of this blog come from the following quote: “Give me six lines written by the most honorable of men, and I will find an excuse in them to hang him.”— Cardinal Richelieu Cardinal Richelieu was a power-hungry authoritarian who understood key elements of security and privacy. First, he recognized that small mistakes can result in big problems. This is particularly true in computer security and digital privacy where a simple programming error can have complex repercussions.

My interest in computer security, digital privacy, and technology policy began simply as a fascination with technology. Here at Six Lines, there are two basic types of posts. Since Six Lines is currently a one-man operation, you may want to know more about me. My name is Aaron Massey. Cardinal Richelieu. Armand Jean du Plessis, cardinal-duc de Richelieu et de Fronsac (French pronunciation: ​[ʁiʃəljø]; 9 September 1585 – 4 December 1642) was a French clergyman, noble and statesman. 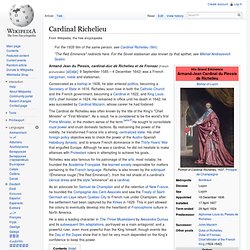 The Cardinal de Richelieu was often known by the title of the King's "Chief Minister" or "First Minister". As a result, he is considered to be the world's first Prime Minister, in the modern sense of the term. [who?] He sought to consolidate royal power and crush domestic factions. 05-Scroogled_-_Cory_Doctorow_-_With_a_Little_Help. Cory Doctorow’s craphound.com » News. With a Little Help. For my friends, past, present and future. 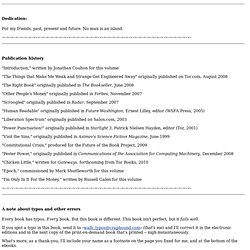 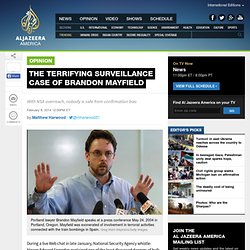 By indiscriminately sweeping up the call records and the international communications of Americans, the government has the ability to engage in retroactive investigation, or mining the historical data of targets for any evidence of suspicious, illegal or simply embarrassing activities. It is a disturbing capability that should make even those fully convinced of their own propriety to think twice before uttering out loud, “What do I have to fear if I have nothing to hide?” But there’s another danger that Snowden didn’t mention that’s inherent in the government’s having easy access to the voluminous data we produce every day: It can imply guilt where there is none.