10 Big Mistakes People Make in Thinking About the Future 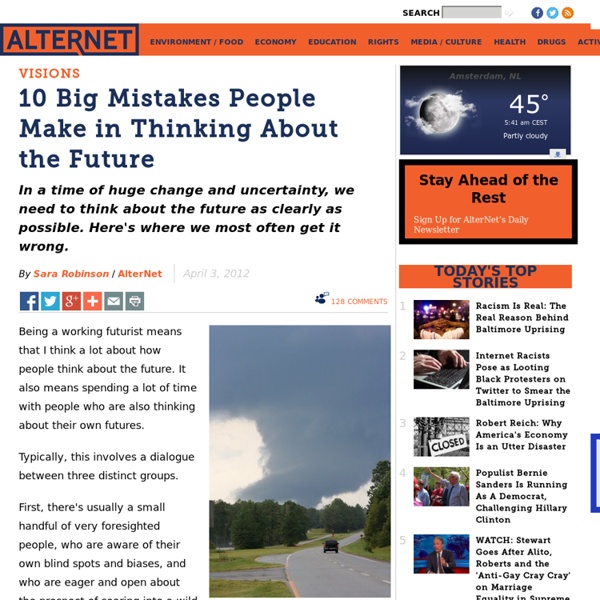 Photo Credit: Frank Peters Being a working futurist means that I think a lot about how people think about the future. It also means spending a lot of time with people who are also thinking about their own futures. Typically, this involves a dialogue between three distinct groups. First, there's usually a small handful of very foresighted people, who are aware of their own blind spots and biases, and who are eager and open about the prospect of soaring into a wild blue sky to gather a lot of exciting new information. Second, there's a larger group of people who don't usually think at 50,000 feet -- but are willing to go there if they're with people they trust. And then there's a third small group that's very resistant to the idea that anything could or should change. 1. But the gotcha is: research by academic futurists has found that this expected future really isn't the most likely outcome at all. It's good to know what your expected future is. 2. 3. 4. 5. 6. 7. 8. 9. 10. Related:  Futurology • cognitive bias and future thinking

Outline of futures studies The following outline is presented as an overview of and topical guide to futures studies – study of postulating possible, probable, and preferable futures, and the worldviews and myths that underlie them. It seeks to understand what is likely to continue, what is likely to change, and what is novel. What is futures studies?[edit] Futures studies can be described as all of the following: a branch of science[citation needed] – a branch of social science –a parallel discipline to history – the field of history concerns the discovery, collection, organization, and presentation of information about past events. "In contrast to many future-oriented organizations that think of "the future" in a singular way as determined by present trends, WFSF [and the futures field in general] encourages and promotes 'plural futures' through exploration of alternative and preferred futures General futures studies concepts[edit] Futures studies organizations[edit] Research centers[edit] Academic programs[edit]

cognitive biases in futurist thinking Hedgehog and fox finger puppetsby Linda Brown (Etsy shop owner) “No serious futurist deals in predictions”. These are the famous words of Alvin Toffler in his seminal book Future Shock from 1971. The availability bias explains that people have the idea that whatever is recalled easily must be very common. The anchoring bias is also what makes it difficult not to be influenced too much by current affairs. The confirmation bias states that people tend to confirm their beliefs. We also observe here the confidence bias, which works on top of the confirmation bias. The narrative fallacy points at the basis human tendency of telling stories. Both Taleb and Garner build on the work of Philip Tetlock, who distinguished two types of predictors: the hedgehog and the fox. Futurists needs these introspective moments. Twitter: @FreijavanDuijne Futuring is my passion.

Paul Isakson: Taking Time To Get It Right There are a lot of people talking about the importance of launching and iterating these days. Just put it out there and keep moving. Don't put off launching to make it perfect. It will never be perfect. While I agree with the spirit of these statements and the context in which people are talking about them, there is a balance. Nobody is dying to see your next ad, so why should you let yourself get caught up in rushing to get a new ad out there? It's important to get the idea right because attention is at a premium. Beyond that, every idea you release into the world determines how willing someone will be to spend time with your next idea. If you want people to spend time with with your ideas, and even more, spread them for you, you shouldn't rush to get them out for the sake of getting them out. Whatever you're creating, give yourself time to get it right.

Cognitive Biases How Playful Workplaces Will Change The Future Of Work After analysis of hundreds of data points collected around the evolution of work and collaboration, the PSFK Consulting Team noticed that businesses are designing their work environments around the philosophy that play and fun can help inspire their employees to design more innovative ideas, products and services. Companies are filling their spaces with vibrant colors, games, interior gardens and, in some cases, large slides as a way tomstimulate the imaginations of their employees and reduce the stresses associated with meeting goals and deadlines. Below we’ve included several of the best examples that supported the theme of ‘Playful Workplaces.’ Office Design Promotes Spontaneous, Playful Interaction Toy manufacturer LEGO’s new office in Denmark is a mixture of creativity, imagination and innovation in the workspace. Game Company Creates Office That Is A Playful “Fantasy Land” Search Giants Boosts Worker Productivity With Office Space Design And Amenities

Humans will be extinct in 100 years says eminent scientist (PhysOrg.com) -- Eminent Australian scientist Professor Frank Fenner, who helped to wipe out smallpox, predicts humans will probably be extinct within 100 years, because of overpopulation, environmental destruction and climate change. Fenner, who is emeritus professor of microbiology at the Australian National University (ANU) in Canberra, said homo sapiens will not be able to survive the population explosion and “unbridled consumption,” and will become extinct, perhaps within a century, along with many other species. United Nations official figures from last year estimate the human population is 6.8 billion, and is predicted to pass seven billion next year. Fenner told The Australian he tries not to express his pessimism because people are trying to do something, but keep putting it off. Fenner said that climate change is only at its beginning, but is likely to be the cause of our extinction. Easter Island is famous for its massive stone statues.

Why do we assume the future will be short? – John Schellenberg In Time’s Arrow, Time’s Cycle (1987), Stephen Jay Gould tells the story of one John Playfair, who in 1788 accompanied the great British geologist James Hutton to see an ‘unconformity’ at Siccar Point in Scotland. With the help of this geological visual – an ancient erosion surface dividing two layers of rock, one gently sloping, the other vertically tilted – Hutton explained to Playfair that the Earth is a machine ceaselessly repeating a cycle of erosion, deposition, and uplift. Playfair later wrote: ‘The impression made will not easily be forgotten... Revolutions still more remote appeared in the distance of this extraordinary perspective. Giddy. Popular now Still living with your parents? Why solitary confinement degrades us all Do the phases of the moon affect human behaviour? By now most of us have absorbed and integrated quite a large number of facts about deep time. You’ll suspect it to be not much. Why has recognising the deep future been so difficult for humanity? 10 February 2014

Humanity+ Overcoming obstacles to effective scenario planning When scenario planning has worked well, it has proved enormously useful to a wide range of organizations as a tool for making decisions under uncertainty. First popularized by Shell in the early 1970s, the approach should be a natural complement to other ways of developing strategy—especially when executives are as concerned about geopolitical dynamics as many are today. It would probably be more widely used if it hadn’t been such a disappointment to many executives. In fact, 40 percent of those we surveyed in 2013 described it as having little effectiveness. Podcast Overcoming obstacles to effective scenario planning DownloadArticle narration That scenario planning often underdelivers, in our observation, can be a simple matter of insufficient experience. Fortunately, an understanding of how such biases undermine scenario planning can mitigate their impact on decision making generally, and improve the effectiveness of scenario planning itself. Combat overconfidence and excessive optimism