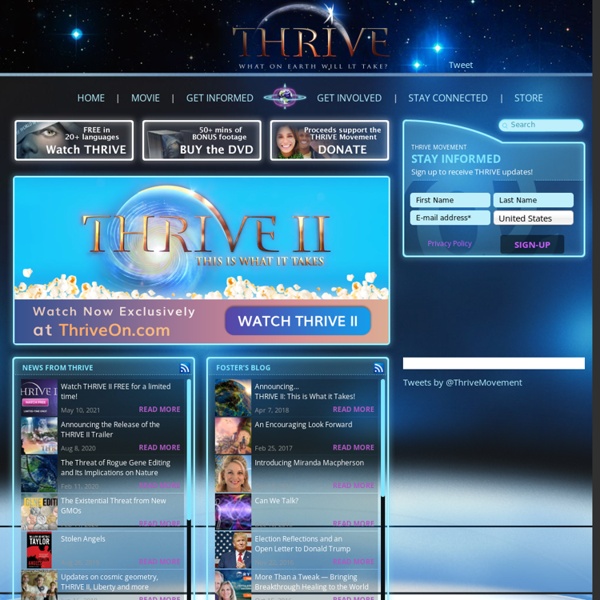 Foster Gamble « Thrive Debunked By SlayerX3 One of the central passages of Thrive is a section often referred to as “Follow the Money,” which Thrive fans treat as some sort of slogan. This section contains Foster Gamble and others’ views on fractional reserve banking, the Federal Reserve, the economic crisis, and conspiracy theories related to these. This article debunks those ideas. Fraction Reserve Banking Disclaimer: The Economics of Happiness (2011) Economic globalization has led to a massive expansion in the scale and power of big business and banking. It has also worsened nearly every problem we face: fundamentalism and ethnic conflict; climate chaos and species extinction; financial instability and unemployment. There are personal costs too. For the majority of people on the planet life is becoming increasingly stressful.

Manufacturing Consent: Noam Chomsky and the Media Manufacturing Consent: Noam Chomsky and the Media (1992) is a documentary film that explores the political life and ideas of Noam Chomsky, a linguist, intellectual, and political activist. Created by two Canadian filmmakers, Mark Achbar and Peter Wintonick, it expands on the ideas of Chomsky's earlier book, Manufacturing Consent: The Political Economy of the Mass Media, which he co-wrote with Edward S. Herman. The film presents and illustrates Chomsky's and Herman's thesis that corporate media, as profit-driven institutions, tend to serve and further the agendas of the interests of dominant, elite groups in the society. A centerpiece of the film is a long examination of the history of The New York Times' coverage of the Indonesian occupation of East Timor, which Chomsky says exemplifies the media's unwillingness to criticize an ally of the elite. Companion book[edit]

Information that Society Needs to Wake the Fu*k Up The current state of humanity’s reality is one big cluster-fu@k, as well as a mystical dream. However, some of the people who are disengaging from ‘mainstream programming’, ‘social engineering’ and are waking up to the realities of our world, have only awoken to one side of the equation. Therefore, this list serves as a reminder of both the educational and conceptual ‘awakenings’ that need to occur on a widespread scale to transform our social systems into their new stage of evolution. Our future generations are depending on us not being asleep at the wheel. Regardless of how challenging at first it is to take in, when we do the ‘proper’ research, we understand that: 1. 8 Ways to Open Your Heart Chakra A balanced heart chakra is a beautiful thing. However, most of us—at one point or another—will encounter major blockages in this area. A myriad of life circumstances can cause problems for your heart center—from break-ups or health issues to low self-esteem.

Kapustin Yar Kapustin Yar (Russian: Капустин Яр) is a Russian rocket launch and development site in Astrakhan Oblast, between Volgograd and Astrakhan. Known today as Znamensk (Russian: Знаменск), it was established 13 May 1946 and in the beginning used technology, material and scientific support from defeated Germany. Numerous launches of test rockets for the Russian military were carried out at the site, as well as satellite and sounding rocket launches. Open Street Map of the area. Light Body Process in The End Times by Georgi Stankov January 15, 2011 from StankovUniversalLaw Website