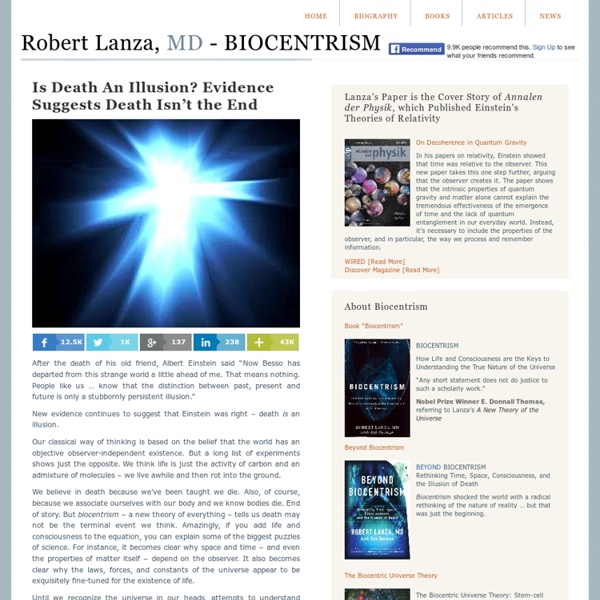 After the death of his old friend, Albert Einstein said “Now Besso has departed from this strange world a little ahead of me. That means nothing. People like us … know that the distinction between past, present and future is only a stubbornly persistent illusion.” New evidence continues to suggest that Einstein was right – death is an illusion. Our classical way of thinking is based on the belief that the world has an objective observer-independent existence. But a long list of experiments shows just the opposite. We believe in death because we’ve been taught we die. Until we recognize the universe in our heads, attempts to understand reality will remain a road to nowhere. Consider the weather ‘outside’: You see a blue sky, but the cells in your brain could be changed so the sky looks green or red. In truth, you can’t see anything through the bone that surrounds your brain. Consider the famous two-slit experiment. Or consider Heisenberg’s famous uncertainty principle. Bizarre? Arcane?

Related:  A Thought or Two • all that is (the objects, the truth, the untruths) part II • that's interesting - hmmm • Philosophy and Spirituality

Colonization, From Without And From Within Colonization is a loaded word, depending on whether you are the colonizer or the colonized. Throughout the history of our civilization, colonizers (imperialists, conquistadors, missionaries and, most recently, globalization corporatists) have asserted that colonized people were “savages” who needed external rule imposed on them “for their own good”. It matters little whether such assertions were honest, well-intentioned and misguided, or blatant excuses for theft, murder and oppression. The whole world is now substantially a single homogeneous colony, a single culture imposed and enforced by political and media propaganda, economic coercion, and of course, brute force.The world “colonize” is from the Latin (whose speakers were accomplished at it) meaning “to inhabit, settle, farm and cultivate”.

The cetacean brain and hominid perceptions of cetacean intelligence "What a piece of work is man! How noble in reason!How infinite in faculty! Genetic study points to Indigenous Australians as the oldest continuous society on Earth The most comprehensive genetic study of Indigenous Australians to date indicates that the group is the oldest continuous civilisation on Earth, dating back more than 50,000 years ago - and that modern Indigenous Australians are the descendants of the first people to settle Australia. The new paper, alongside two others published today in Nature, reveal important information about the origins and migratory history of our species, including insight into the common ancestors of all non-African humans alive today. According to the DNA results in two of the papers, most modern Eurasians are descended from a single wave of migrants that left Africa around 72,000 years ago. From that original migration, Indigenous Australians and Papuans (ancestors of indigenous people from New Guinea) split off and ventured across the sea around 58,000 years ago before arriving in Australia roughly 50,000 years ago - and were likely the first humans to cross an ocean.

The Seven Spiritual Laws of Success by Deepak Chopra The Seven Spiritual Laws of Success by Deepak Chopra The Law of Pure Potentiality Take time to be silent, to just BE. Meditate for 30 minutes twice a day. Silently witness the intelligence within every living thing. Practice non-judgment. 25 clever ideas to make life easier Via: amy-newnostalgia.blogspot.com Why didn’t I think of that?! We guarantee you’ll be uttering those words more than once at these ingenious little tips, tricks and ideas that solve everyday problems … some you never knew you had! (Above: hull strawberries easily using a straw). Via: apartmenttherapy.com Virtual afterlives will transform humanity – Michael Graziano In the late 1700s, machinists started making music boxes: intricate little mechanisms that could play harmonies and melodies by themselves. Some incorporated bells, drums, organs, even violins, all coordinated by a rotating cylinder. The more ambitious examples were Lilliputian orchestras, such as the Panharmonicon, invented in Vienna in 1805, or the mass-produced Orchestrion that came along in Dresden in 1851. But the technology had limitations. To make a convincing violin sound, one had to create a little simulacrum of a violin — quite an engineering feat.

Russian DNA Discoveries Explain Human 'Paranormal' Events Esoteric and spiritual teachers have known for ages that our body is programmable by language, words and thought. This has now been scientifically proven and explained. The human DNA is a biological Internet and superior in many aspects to the artificial one. The latest Russian scientific research directly or indirectly explains phenomena such as clairvoyance, intuition, spontaneous and remote acts of healing, self healing, affirmation techniques, unusual light/auras around people (namely spiritual masters), mind’s influence on weather patterns and much more. In addition, there is evidence for a whole new type of medicine in which DNA can be influenced and reprogrammed by words and frequencies WITHOUT cutting out and replacing single genes.

We finally know how water bears became so damn unkillable Water bears, or tardigrades as they're officially known, are chubby little anomalies that are damn near indestructible - they can bounce back from total desiccation, endure the greatest temperature extremes we can throw at them, and can even survive the frozen vacuum of space. Now a team of scientists in Japan has sequenced their genomes, and finally shed some light on how they got so tough. It turns out tardigrades have developed a range of handy tools to help them avoid death time and time again - including a protein that acts as an in-built radiation shield for DNA. Even cooler, the researchers showed that, when incorporated into human cells, this radiation-blocking protein also reduced the damage to human DNA from X-rays by an impressive 40 percent.

Wayne Herschel author - The Hidden Records - discovered ancient alien star maps around the world showing human star origins - a true story now 'fictionalized' and twisted in PROMETHEUS movie David Bowie placed his name with the seven stars cipher personifying himself as the starman. He is Orion Man as the human blueprint message found in the other ancient star maps ref . No surprise as he played this role in a movie some time back as well. He possibly endorses secret knowledge, be it by spiritual gift or membership of a secret society showing the secret star map in all my cases on this website. He shows the Pleiades with one star in tradition like the Carthusian order... six small stars and one larger star ref .

Animal Crossing: A Touching Story A touching story about a Gamecube/DS game? Yes, I know it sounds like madness but this really is something I felt worth posting. Text Version Be a Scrooge This Year: Reflections from A Christmas Carol The name of Ebenezer Scrooge has become synonymous with miserliness, greed, grumpiness…all those things you don’t want to be. It’s really too bad, and Scrooge gets an unfair treatment in my opinion, because at the end of A Christmas Carol, he’s changed his ways and become a whole new man. The story should be remembered more for that — for the hope that a man can mend his ways and change his spirit — than for the coldness old Scrooge displays at the outset. Author Charles Dickens wrote in a preface to the short novel that his intent in writing was “to awaken some loving and forbearing thoughts.” After going through the text for the AoM Book Club, the following questions sort of naturally arose as I was thinking about it. Hopefully we can use these as a reflection for the Christmas season to be able to awaken some of those loving thoughts that Dickens was eager to find.