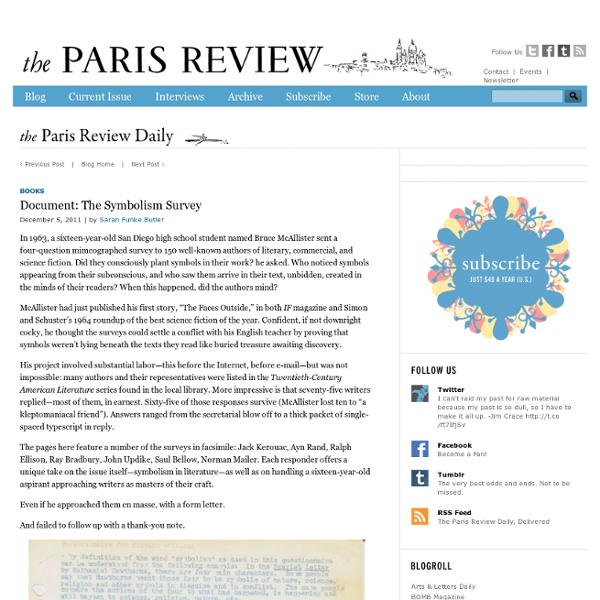 In 1963, a sixteen-year-old San Diego high school student named Bruce McAllister sent a four-question mimeographed survey to 150 well-known authors of literary, commercial, and science fiction. Did they consciously plant symbols in their work? he asked. Who noticed symbols appearing from their subconscious, and who saw them arrive in their text, unbidden, created in the minds of their readers? When this happened, did the authors mind? McAllister had just published his first story, “The Faces Outside,” in both IF magazine and Simon and Schuster’s 1964 roundup of the best science fiction of the year. His project involved substantial labor—this before the Internet, before e-mail—but was not impossible: many authors and their representatives were listed in the Twentieth-Century American Literature series found in the local library. The pages here feature a number of the surveys in facsimile: Jack Kerouac, Ayn Rand, Ralph Ellison, Ray Bradbury, John Updike, Saul Bellow, Norman Mailer.

When Will White People Stop Making Movies Like "Avatar"? This is wrong on so many levels... Pandora was modeled after mainland China; I don't think any New World analogy was intended here. They even wear their hair in a queue! You mention that the protagonist is played by a white actor and many of the Na'vi are played by minorities, but ignore the other Na'vi played by whites, or the other humans who were Hispanic and Indian. You compare it to Dune, yet don't mention that Dune itself is about people with Arab names and vocabulary — and was clearly inspired by T. Furthermore, you decry the idea of an outsider joining to help an oppressed group, but don't notice that this is what always happens in history when one group is technologically more advanced than another. It's especially odd that you go looking for "patterns" in these movies, but don't even mention Joeseph Campbell, who did the same and found these same patterns dating back thousands of years, in virtually all cultures.

erin's emporium of discount dreams & well-worn wonders Watch a complete 1990 documentary about cyberpunk, featuring a young William Gibson They tapped into something fantastic at that time. The effect of recording in Berlin right after the fall of communism and just the genuine cultural experimentation that was exploding in the air everywhere. It was so brief but it really created some amazing things. Yeah, I tend to look at 1991-94 as the last hurrah of rock 'n' roll. This article is nearly old enough to hold a driver's license, but it's a pretty succinct rundown of how the recording industry was running on gas fumes by the mid-'90s.

Where to Begin | Online Only Following on from our How to Write About Pakistan feature yesterday, Nadeem Aslam, whose novella Leila in the Wilderness opens our Pakistan issue, reflects on the same questions with a focus on his own work. Imagine an area of darkness. We don’t know the time, we don’t know the place. It could be the year of Aeschylus’s birth in Greece, or it could be 19 November 1942 in the town of Drohobycz, or the day after tomorrow in Lahore. Now imagine a circle of light within this darkness and a middle-aged woman standing in it. I could be wrong, but it seems to me that as artists, as writers, as thinkers, and as human beings, we can all fill a number of pages about what that woman is going through. How to write fiction about Pakistan ? Pakistanis are as complex as any other people on the planet. This is not to say that these are not tourist clichés – but they must remain available to the artist as well as the non-artist. To me Urdu is always the first point of reference. See also...

The Best Science Fiction and Fantasy Books of 2011 Huh. Interesting. I'll be 40 in two months, and I completely adored the book and your analysis of it (which I think is valid, by the way) totally sailed over my head. Now, I'll be honest. My husband and I have no kids. We live in a remix culture. The fact is that we're becoming a cultural ouroboros—feeding on ourselves, remixing and mashing up the remixes until eventually we may not even recognize the original source material anymore. And that, I think, is what I loved so much about the book.

Philosophical Quotes, Thought-Provoking Sayings Related Quotes Hmmm Philosophy Truth Wise Words We are more often treacherous through weakness than through calculation. ~François VI de la Rochefoucault A man with one watch knows what time it is; a man with two watches is never quite sure. Begin at the beginning... and go on till you come to the end: then stop. Believe those who are seeking the truth; doubt those who find it. Beware lest you lose the substance by grasping at the shadow. Only that in you which is me can hear what I'm saying. I am a part of all that I have met. There's more to the truth than just the facts. The obscure we see eventually. Even a clock that does not work is right twice a day. Losing an illusion makes you wiser than finding a truth. If a man who cannot count finds a four-leaf clover, is he lucky? We are all but recent leaves on the same old tree of life and if this life has adapted itself to new functions and conditions, it uses the same old basic principles over and over again. The obstacle is the path.

THE FIRST CON (1937) In January 1937, the Leeds chapter of the Science Fiction League brought something new into the world: the first ever SF convention. (A counter claim is made for an earlier visit of New York fans to meet Philadelphia fans at the home of one of their number, but this is hard to take seriously - see THE FIRST EVER CONVENTION, link below.) At a time when travelling any distance was much more difficult than it is today, several of those attending travelled hundreds of miles to be there. After the convention - or conference, as they called it - a souvenir report was issued (see below). Early convention literature did not contain a list of those who attended, unfortunately. "Although the conference's OFFICIAL SOUVENIR REPORT claimed an attendance of 'about twenty', Eric Frank Russell, who had been there, stated there were thirteen, and an extant photograph of the group shows only eleven. See list of those 14 known attendees below. Known attendees:

Great Books Index - List of Titles An Index to Online Great Books in English Translation To obtain an index of an author's works, including any known online editions of each work, and online articles about that author, select the author's name. To obtain an index of online editions of a particular work, select the name of that work. Then you will be able to scroll up and down to see other works by that author and articles about the author. Authors are listed here in order of their birthdates (insofar as known). To obtain an alphabetical listing of authors, go to the Author Index . The Bible -- Homer -- Aeschylus -- Sophocles -- Euripides -- Herodotus -- Thucydides -- Hippocrates -- Aristophanes -- Plato -- Aristotle -- Euclid -- Archimedes -- Apollonius -- Lucretius -- Virgil -- Tacitus -- Epictetus -- Nicomachus -- Plutarch -- Ptolemy -- Marcus Aurelius -- Galen -- Plotinus -- St Augustine -- The Quran -- St Thomas Aquinas -- Dante -- Chaucer -- Erasmus -- Machiavelli -- Copernicus -- Rabelais -- John Calvin -- Montaigne -- William Gilbert -- Cervantes -- F.

Michael Synergy | nomadic utopianism Welcome to Cyberia If hauntological music is rekindling (or hankering after) a utopian vision drawn from certain facets of English culture c.1950-1980, then what’s the utopian vision of its brash US cousin, hypnagogic pop? David Keenan (who coined the term) and Simon Reynolds both argue that hypnagogic pop takes its aesthetic cues from 80s pop and soft-rock (Don Henley, Fleetwood Mac- even Chris de Burgh) and New Age spirituality (Wyndham Hill Records, tie dye tshirts- even Enya), and they’re clearly onto something. But I reckon there’s another utopia/dystopia buried in the liminal zones of hypnagogia: cyberpunk. There’s reasonable hypothetical grounds to assume a link between cyberpunk and hypnagogic pop. This link between cyberpunk and hypnagogic pop has been hovering in the liminal spaces of my own brain recently but it made itself explicit when I recently watched the 1990 documentary film Cyberpunk (which you can watch too!). Many William Gibsons: a still from 'Cyberpunk'. 1. 2. 2.