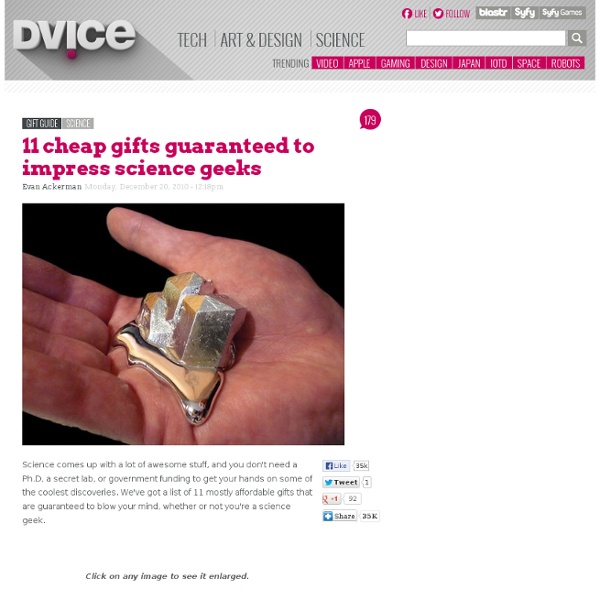 Science comes up with a lot of awesome stuff, and you don't need a Ph.D, a secret lab, or government funding to get your hands on some of the coolest discoveries. We've got a list of 11 mostly affordable gifts that are guaranteed to blow your mind, whether or not you're a science geek. Click on any image to see it enlarged. 1. Aerogel Also known as frozen smoke, Aerogel is the world's lowest density solid, clocking in at 96% air. Aerogel isn't just neat, it's useful. Price: $35 2. Inside these sealed glass balls live shrimp, algae, and bacteria, all swimming around in filtered seawater. EcoSpheres came out of research looking at ways to develop self-contained ecosystems for long duration space travel. Price: $80 3. NASA has been trying to figure out how to get a sample of rock back from Mars for a while now. Every once in a while, a meteorite smashes into Mars hard enough to eject some rocks out into orbit around the sun. Price: $70+ 4. Price: $150 5. Price: $110 6. Price: $80 7. Price: $15 8.

Make a Bouncing Polymer Ball - Experiment with Polymers Introduction Balls have been toys practically forever, but the bouncing ball is a more recent innovation. Bouncing balls were originally made of natural rubber, though now bouncing balls can be made of plastics and other polymers or even treated leather. You can use chemistry to make your own bouncing ball. Sizes of the Universe Poster Share this infographic on your site! <a href=" src=" alt="Sizes of the Universe" width="500" border="0" /></a><br />Source: <a href=" Sleuth</a> Embed this infographic on your site!

New Examples of Beautiful Typography Inspiration Home » Inspiration • Showbiz • Typography Dose » New Examples of Beautiful Typography Inspiration Typography is not only the art of rearranging the typefaces, instead it has now become a broad medium to communicate with your visitors in a more attractive and visually engaging manner while providing your design a remarkable and creative look. The results are sometime crazy, sometime artsy and sometimes beautiful, but often just different from things we’re used to. Not only can good use of typography add to your design from a visual standpoint, it can also play an important role in defining the hierarchy of the content.

Glass lens doorknob gives preview of room beyond Probably not all doors should offer previews, all the time, but this is undeniably wonderful. As it is, the knob offers bi-directional viewing; I wonder if you could half-silver one side and make it one-way? Johnny Strategy at Spoon & Tomago writes: In conjunction with Design Tide Tokyo, architect Hideyuki Nakayama – a protÃ©gÃ© of Toyo Ito – has teamed up with UNION, a manufacturer of door handles and levers, to create a glass globe doorknob.

Top 10 Mad Science-Worthy Chemistry Experiments Chemistry is a fascinating science, but it's often taught poorly in today's boring schools. Here's how chemistry should be taught: by mad scientists! Here's Neatorama's list of the Top 10 Mad Science-Worthy Chemistry Experiments: 1. Briggs-Rauscher Reaction New comet likely to impress when it passes closest to Earth in December By Alan Pickup, The GuardianSunday, October 14, 2012 20:16 EDT A comet found recently beyond the orbit of Jupiter could well become spectacular late next year and may be a sibling of one of the most celebrated comets of all time. What is formally known as Comet C/2012 S1 (ISON) was not at first recognised as a comet when it was spotted as a 19th magnitude object using a small Russian telescope of the International Scientific Optical Network on 21 September. Earlier images have been found stretching back to last year, allowing its orbit to be calculated and showing that it is destined to sweep within 1.2 million km of the Sun’s surface at perihelion on 28 November 2013.

Magnetic Putty is Completely Amazing/Terrifying Magnetic putty is just like any other putty in that you can handle it, sculpt it, and squeeze it in a fist as you visualize your enemies. But place it anywhere near a strong magnetic field and it will SPONTANEOUSLY ANIMATE and move to consume anything magnetic in its path like a voracious mutated slug. In fact the putty won’t stop moving until the object has been equally engulfed on all sides.

Natural Pools or Swimming Ponds Natural Pools or Natural Swimming Ponds (NSPs) Let nature clean the water... Chemical-free water garden and swimming pool. The plant portion, or regeneration zone, is separated from the swimming area by the wall seen a few inches below the water’s surface. www.naturalswimmingpools.com The pools have skimmers and pumps that circulate the water through the regeneration zone and back into the swimming area. The aquatic plants filter out contaminants and use nutrients from the water as food which helps prevent algae.