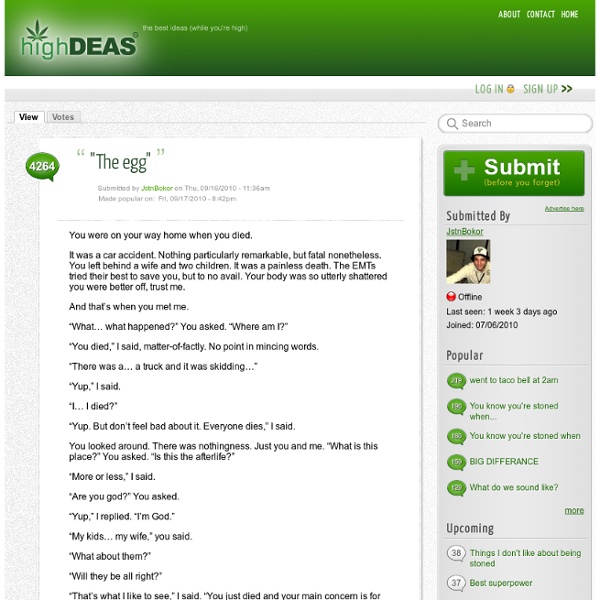 You were on your way home when you died. It was a car accident. Nothing particularly remarkable, but fatal nonetheless. You left behind a wife and two children. It was a painless death. The EMTs tried their best to save you, but to no avail. And that’s when you met me. “What… what happened?” “You died,” I said, matter-of-factly. “There was a… a truck and it was skidding…” “Yup,” I said. “I… I died?” “Yup. You looked around. “More or less,” I said. “Are you god?” “Yup,” I replied. “My kids… my wife,” you said. “What about them?” “Will they be all right?” “That’s what I like to see,” I said. You looked at me with fascination. “Don’t worry,” I said. “Oh,” you said. “Neither,” I said. “Ah,” you said. “All religions are right in their own way,” I said. You followed along as we strode through the void. “Nowhere in particular,” I said. “So what’s the point, then?” “Not so!” I stopped walking and took you by the shoulders. “How many times have I been reincarnated, then?” “Oh lots. “Wait, what?” “Sure.

Camping Knots for Wilderness Survival By Filip Tkaczyk Knowing how to tie good camping knots is an invaluable skill in wilderness survival situations. Its also a great asset when having fun in the outdoors. So you want to become a Happiness Ninja? Part of the reason I’m so happy is that I discovered what I’m passionate about and decided to focus on the things that inspire me. To do this I had to take a few risks and make major changes in my life. Examples of these changes include: 1. Quitting my day job and moving to a city that fit my needs. SCHOPENHAUER'S 38 STRATAGEMS, OR 38 WAYS TO WIN AN ARGUMENT Arthur Schopenhauer (1788-1860), was a brilliant German philosopher. These 38 Stratagems are excerpts from "The Art of Controversy", first translated into English and published in 1896. Carry your opponent's proposition beyond its natural limits; exaggerate it. The more general your opponent's statement becomes, the more objections you can find against it. The more restricted and narrow his or her propositions remain, the easier they are to defend by him or her.

Sony's PlayStation 3 experiences its biggest hack yet Hackers have found a way to break down one of the toughest defensive walls in Sony's PlayStation 3 software security, ensuring that those who use custom firmware can run homebrew software and pirated games forever. A group calling itself "The Three Musketeers" on Monday released a secret set of LV0 codes that can decrypt the PlayStation 3's Level 0 (LV0) security layer used by the primary boot loader. This means that hackers should always have the ability to release custom firmware for the device any time Sony updates the console's software. Custom firmware gives PS3 owners the ability to run pirated games, homebrew software (such as retro game emulators), and even Linux.

10 Really Lame Ideas and Beliefs to Let Go Of I think it’s a universal law that you have to clear space for newness to enter; let something die for something to be born; cleanse to heal; let go to receive. Just like we clear our lungs to take in new air, we need to empty our minds of dull ideas to create brighter lives. 10 Lame Ideas, Notions, Concepts, Beliefs, and Standards to Let Go of on Your Way to Fulfillment Things My Father Didn’t Teach Me ABOUT ARCHIVE FOLLOW Facebook Twitter Instagram Google+ Ads Via The Deck Things My Father Didn’t Teach Me share it happyfathersday 4,393 notes The 9 Epiphanies That Shifted My Perspective Forever By David Over the years I’ve learned dozens of little tricks and insights for making life more fulfilling. They’ve added up to a significant improvement in the ease and quality of my day-to-day life.

The Kaipullai's Vetti Thoughts : The outer playground of my inner devil History books tell us that only events of tectonic magnitude, like say the Vasco Da Gama journey, shapes the history of the world. This post is not about events like that. This post is about some random little incidents from Indian history. » The Ultimate Guide to Motivation - How to Achieve Any Goal “Obstacles are those frightful things you see when you take your eyes off your goal.” - Henry Ford One of the biggest challenges in meeting any goal, whether it be related to productivity, waking early, changing a habit, exercising, or just becoming happier, is finding the motivation to stick with it. If you can stick with a goal for long enough, you’ll almost always get there eventually.