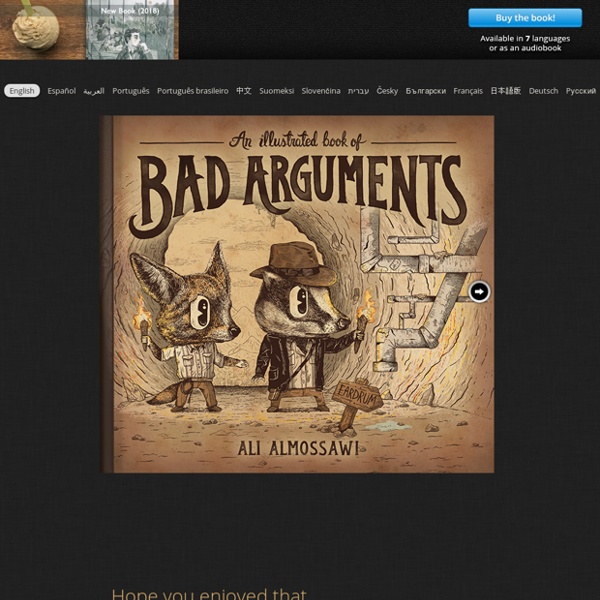 This tiny print serves no purpose, but to make this book seem like an actual book. In printed books, one usually sees a large block of tiny print on the first or second page followed by terms like © 2013. All Rights Reserved. So and so. Printed in the United States of America. The publisher may also include prose to deter would-be pirates.

20 more awesomely untranslatable words from around the world If only you could use these words in Scrabble. Photo: Jeremy Mates When linguists refer to “untranslatable” words, the idea is not that a word cannot somehow be explained in another language, but that part of the essence of the word is lost as it crosses from one language to another. This often is due to different social and cultural contexts that have shaped how the word is used. In the novel Shame, Salman Rushdie’s narrator suggests: “To unlock a society, look at its untranslatable words.”

We're Underestimating the Risk of Human Extinction Unthinkable as it may be, humanity, every last person, could someday be wiped from the face of the Earth. We have learned to worry about asteroids and supervolcanoes, but the more-likely scenario, according to Nick Bostrom, a professor of philosophy at Oxford, is that we humans will destroy ourselves. Bostrom, who directs Oxford's Future of Humanity Institute, has argued over the course of several papers that human extinction risks are poorly understood and, worse still, severely underestimated by society. Some of these existential risks are fairly well known, especially the natural ones. But others are obscure or even exotic. Most worrying to Bostrom is the subset of existential risks that arise from human technology, a subset that he expects to grow in number and potency over the next century.

Critical Thinking in Everyday Life: 9 Strategies Most of us are not what we could be. We are less. We have great capacity. But most of it is dormant; most is undeveloped. Improvement in thinking is like improvement in basketball, in ballet, or in playing the saxophone. It is unlikely to take place in the absence of a conscious commitment to learn. Someday Quilts Mysteries Book #5 Nell’s future is on her mind, and it looks as though the pieces are coming together like a perfectly made quilt. Her relationship with police chief Jesse Dewalt is heating up, she’s thinking of starting her own business, and Grandma Eleanor, is about to get hitched. But just the future seems sewn up, Jesse’s former NYPD partner turns up—dead. Nell has to scramble to keep the wedding on track, her relationship from falling apart, and herself from being the target of a stranger with a secret. E-Novella #2 When Joe, the ill-tempered owner of Archer’s Rest’s only pizzeria, gets locked up overnight, it turns into a death sentence.

Perfect solution fallacy by Tim Harding “The perfect is the enemy of the good.” — Voltaire “Nobody made a greater mistake than he who did nothing because he could do only a little.” – Edmund Burke The Perfect Solution Fallacy (also known as the ‘Nirvana Fallacy‘) is a false dichotomy that occurs when an argument assumes that a perfect solution to a problem exists and/or that a proposed solution should be rejected because some part of the problem would still exist after it were implemented. 25 Handy Words That Simply Don’t Exist In English Approximately 375 million people speak English as their first language, in fact it's the 3rd most commonly spoken language in the world (after Mandarin Chinese and Spanish). Interestingly enough it's the number 1 second language used worldwide - which is why the total number of people who speak English, outnumber those of any other. But whilst it's the most widely spoken language, there's still a few areas it falls down on (strange and bizarre punctuation rules aside).

Science and Nonduality In this article standup philosopher Tim Freke articulates the nature of ‘paralogical’ thinking, which is the foundation of the philosophy and practices he shares to guide people to a ‘deep awake’ state. The need for paralogical thinking arises from an important insight. Life is profoundly paradoxical.

How To Use Critical Thinking In Everyday Life – G.S. Muse We are often told that we should think critically, and that we should not believe everything we hear. We often hear “facts” about science, politics, history, economics, and religion. But if we are honest with ourselves, most people do not know how to think critically about claims that they hear. Most of us follow our preferred media sources, and usually these are media sources that agree with our worldview. Quite often, many people believe their preferred media source to be “unbiased,” “neutral,” or “objective”.

On Stranger Tides On Stranger Tides is a 1987 historical fantasy novel written by Tim Powers. It was nominated for the World Fantasy Award for Best Novel,[1] and placed second in the annual Locus poll for best fantasy novel.[2] Plot summary[edit] 10 Problems With How We Think by Ross Pomeroy By nature, human beings are illogical and irrational. For most of our existence, survival meant thinking quickly, not methodically. Making a life-saving decision was more important than making a 100% accurate one, so the human brain developed an array of mental shortcuts. Though not as necessary as they once were, these shortcuts -- called cognitive biases or heuristics -- are numerous and innate.

Wabi-Sabi: Translating the Beauty in Imperfection Wabi-sabi. It’s a concept, an aesthetic, and a worldview. It’s also a phrase that doesn’t translate directly from Japanese into English, and the ideas behind it may not immediately translate in the minds of those who haven’t encountered it before. 10 Mind-Blowing Theories That Will Change Your Perception Of The World by Anna LeMind Reality is not as obvious and simple as we like to think. Some of the things that we accept as true at face value are notoriously wrong. Scientists and philosophers have made every effort to change our common perceptions of it.