WHAT IS YOUR WORLDVIEW? 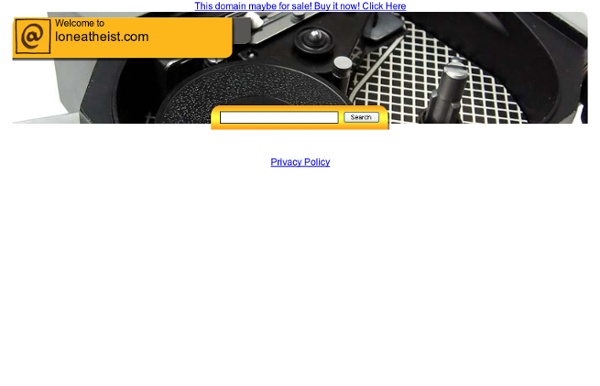 Understanding Evolution The bacteria that changed the world - May, 2017 The make-up of Earth's atmosphere, once the domain of Earth science textbooks, has become an increasingly "hot" news topic in recent decades, as we struggle to curb global warming by limiting the carbon dioxide that human activity produces. While the changes that humanity has wrought on the planet are dramatic, this isn’t the first time that one species has changed Earth’s atmosphere. Three billion years ago, there was no free oxygen in the atmosphere at all. Life was anaerobic, meaning that it did not need oxygen to live and grow. That all changed due to the evolution of Cyanobacteria, a group of single-celled, blue-green bacteria. Read the rest of the story here | See the Evo in the News archive

What they used to look like. Living the wild life... Call of Duty Karachi Sherlock? Leaving messages for the future. This dog's life is beyond better than mine. If countries were classmates. The Origin and Evolution of Cells - The Cell - NCBI Bookshelf More random facts {Part 2} Posted on February 10, 2012 in Humor If you’re new here, you may want to subscribe to our RSS feed or follow us on Facebook or Twitter . Thanks for visiting! Rate this Post (3 votes, average: 2.33 out of 5) Loading ... So... Check this out on our Partner Network

rotten.com: This is rotten dot com 10 Very Happy Animals March 19, 2012 at 4:00pm | by AP I want whatever they’re having… Like Terribly Cute for daily content like this! Contrasting and categorization of emotions The contrasting and categorisation of emotions describes how emotions are thought to relate to each other. Various recent proposals of such groupings are described in the following sections. Contrasting Basic Emotions[edit] The following table,[1] based on a wide review of current theories, identifies and contrasts the fundamental emotions according to a set of definite criteria. The three key criteria used include: 1) mental experiences that have a strongly motivating subjective quality like pleasure or pain; 2) mental experiences that are in response to some event or object that is either real or imagined; 3) mental experiences that motivate particular kinds of behaviour. HUMAINE's proposal for EARL (Emotion Annotation and Representation Language)[edit] The emotion annotation and representation language (EARL) proposed by the Human-Machine Interaction Network on Emotion (HUMAINE) classifies 48 emotions.[2] Parrott's emotions by groups[edit] Plutchik's wheel of emotions[edit] See also[edit]

Dave! Dave was bragging to his boss one day, "You know, I know everyone there is to know. Just name someone, anyone, and I'll know them." Tired of his boasting, his boss called his bluff, "OK, Dave, how about Tom Cruise?" "No drama's boss, Tom and I are old friends, and I can prove it." So Dave and his boss fly out to Hollywood and knock on Tom Cruise's door and Tom Cruise shouts, "Dave! Although impressed, Dave's boss is still sceptical. No, no, just name anyone else," Dave says. "President Bush," his boss quickly retorts. "Yup," Dave says, "Old buddies, let's fly out to Washington." And off they go. Well, the boss is very shaken by now but still not totally convinced. "The pope," his boss replies. "Sure!" So off they fly to Rome. "This will never work. And he disappears into the crowd headed toward the Vatican. Working his way to his boss' side, Dave asks him, "What happened?" His boss looks up and says, "I was doing fine until you and the Pope came out on the balcony and the man next to me said,