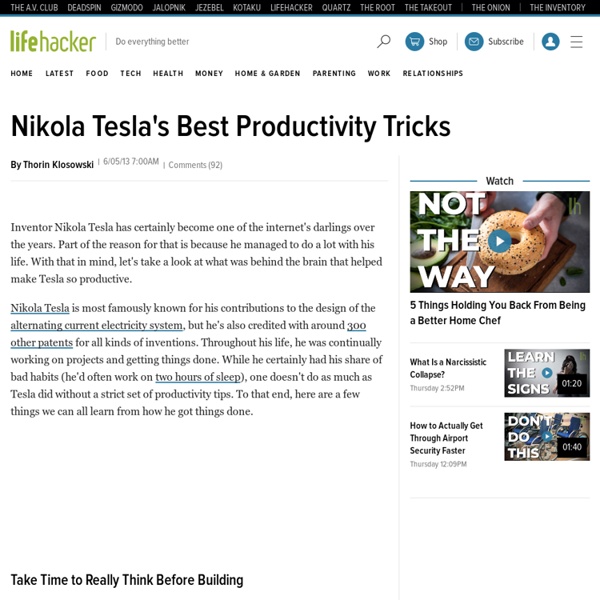 10 Golden Lessons from Albert Einstein Every day I remind myself that my inner and outer life are based on the labors of other men, living and dead, and that I must exert myself in order to give in the same measure as I have received and am still receiving - Albert Einstein Albert Einstein was an amazing physicist. He figured out so many universal principles and equations that he was way ahead of his fellow scientists at any point of time. But he is also remembered for another thing; a quality which made people call him a genius: his words. Prof. Einstein was a philosopher who clearly understood the laws of success and explained them like the way he did with his equations. 1. Most people don’t try new things because of their fear of failure. 2. 30 years from now, you won’t possibly remember what chapters you had in your science book; you’d only remember what you learn on your way. 3. 4. Creativity and uniqueness often depends on how well you hide your sources. 5. 6. 7. 8. 9. 10. Intelligent people ask.

25 of the greatest Sci-Fi books ever written Freelancer Time Management Systems | Toptal "The Master does nothing, yet he leaves nothing undone. The ordinary man is always doing things, yet many more are left to be done."-- Tao Te Ching Sometimes I wish I was a vampire, or at least a werewolf. Subtract six or more hours for sleep, and I’m stuck with a measly 18-ish hours for work and play. Since we can’t turn into supernatural beings or warp spacetime as we please, we have to make the most of our time, which is why time management is so important and why I decided to write this post. The post will cover various methods and tools in my productivity toolbox: Why time management is as critical as technical skills, especially for freelancers. Every freelancer has an hourly rate but, sometimes, we don’t realize that higher hourly rates don’t necessarily translate into higher earnings on a monthly or annual basis. Freelancers usually bill by the hour, so time management also means money management. The 3 Components of Good Time Management Systems You should trust the system. Say “no.”

The 16 Best Western Movies Few figures in history have had as powerful an impact on American masculinity as the cowboy. For over a century, the cowboy has — for better or for worse — been a standard of rugged individualism and stoic bravery for the American male. While the mythologization of the American cowboy began all the way back in the 1880s with dime novels and Wild West shows, it wasn’t until the advent of twentieth century cinema that the cowboy cemented his place as an icon of manliness. The Western has been a popular genre of cinema since the very beginning of film, and successive generations of filmmakers have used the “Wild West” as a backdrop on which to explore the social issues of their respective eras. Many of the early silent films at the beginning of the 20th century were Westerns, the most famous being 1903′s The Great Train Robbery. It isn’t until the 1930s that the Western became an avenue for telling stories with searching and hard-hitting messages. High Noon Best line: “Don’t shove me Harv.

This Guy's Crazy And Fascinating Hobby Involves Creating His Own Swords Imgur user Michaelcthulhu got his nickname for a very good reason: He designs and forges his own awesome swords. He creates blades both large and small, and just like any true swordsman, all of his creations have their own (epic) names. Something tells me Michael would be right at home in the Game of Thrones or Lord of the Rings universe! Michael's hobby is definitely not something that most people would ever get into, but it's definitely cooler than anything I could EVER do! Source: imgur.com

17 Small Productivity Habits The Mini-Habit The idea behind mini habits is that you can get to a larger habit if you start small, create simple goals, and aim for consistency. In his book Mini Habits: Small Habits, Bigger Results, Stephen Guise gives the example of “The One Pushup Challenge.” He was doing what a lot of us do. Feeling guilty about not working out, he tried to fit years worth of exercise into the first workout which created an all or nothing attitude (not to mention a focus on goals and not process.) In Habit Stacking: 97 Small Life Changes That Take Five Minutes or Less, author S. The core idea behind the mini-habits concept is that you can build a major habit by thinking small enough to get started. Habit-Stacking The purpose of habit-stacking is to create simple and repeatable routines (managed by a checklist). According to Scott there are 8 Elements of a habit-stacking routine. 17 Small Productivity Habits #1 Drink a Large Glass of Water #2. #3. #4. #5. #6. #7. #8. #9. #10. #11. #12. #13. #14. #15.

How To: Be An Optimist Share on Facebook Share on Twitter Page 2 of 2 Look for the silver lining Optimists understand that, all in all, life goes on. It's absurd to think that the financial markets will be down forever. Resolve to be an optimist in 2012 One of the great optimists of the latter half of the 20th century was a brilliant economist name Julian Simon. You can go back centuries and centuries looking for bad news about the future, looking for doomsday language in everything you read, or you can believe that in one form or another, life will go on just fine, it will merely require a few adjustments. 5 Morning Rituals to Keep You Productive All Day Long Most of us work long hours: 40, 50 or even 60 hours each week. But chances are, given distractions like online entertainment, office snacking habits and ill-designed time management, we're only churning out high-quality work a portion of each day. Here are five practical steps to incorporate into any morning routine to optimize your time at the office and maintain productivity all day long: 7 minutes of exercise. Yep, not 10 -- just seven. Why? There are endless fitness routines to turn to, but the one I like best is called the 7 Minute Workout (and yes, there's an app for that). Start your day out green. While all of these options are fine choices once in a while, you'll be shocked at the morning lift you can get from a green smoothie. I go quick and easy, blending (for about a minute): one apple, one banana, one orange, a handful of spinach, half of a cucumber, any juice or coconut water on hand, a few cubes of ice and some flax seed. Pick 3 wins for the day. Power up after lunch.

​The 20 Most WTF Magical Items in Dungeons & Dragons "People who look at the brooch, uh… forget numbers. Like they forget five is more than three, how currency exchange works, and more." This sounds really awesome. These items are brilliant, and if you can't find a use for them, sir, then the lack is only in your imagination! Honestly, what's more fun?