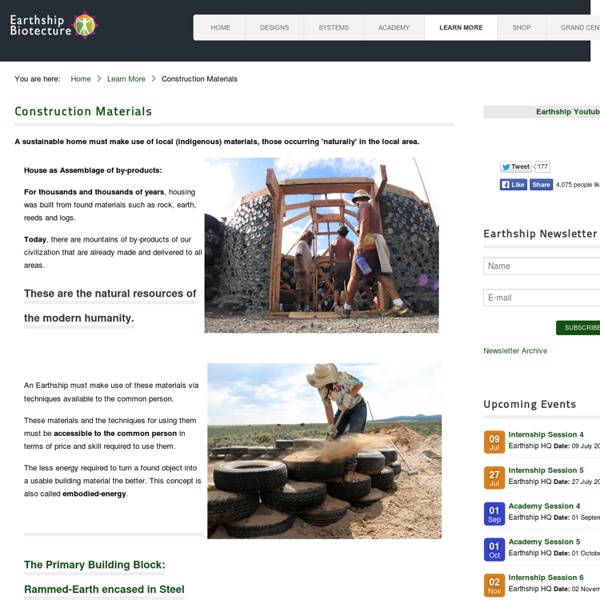 Construction Materials A sustainable home must make use of local (indigenous) materials, those occurring 'naturally' in the local area. The Nature of the Materials In keeping with the design and performance requirements of a Earthship Biotecture, the nature of the building matierials for an Earthship must have certain characteristics established. The requirements and characteristics below describe the nature of the ideal 'building block' for constructing the ideal building for residential and commercial applications. Indigenous: Materials are found all over the planet. Able to be fashioned with little or no energy: If a building material was found that was indigenous to many parts of the planet but it required massive amounts of energy to fashion into a usable form, then it would not be sustainable and not considered. Thermal Mass : Durability: We have built out of wood for centuries. Resilient: Earthquakes are an issue in many parts of the world. Low specific skill requirements:

CoLiberation I joined Google Plus for one reason. Hangouts. I loved everything about this way of meeting people - how you could see everybody at once (up to 10 people), how whoever was talking took the center of the virtual stage. How what you wound up talking about often depended on who happened to drop in, or out. And especially how you could join and quit whenever you were so moved. In many ways, it seemed to me to be the virtual instantiation of a play community. There are other aspects of this virtual environment that contribute as strongly to it being a grounds for play, for experiencing coliberation. One more thing (no, I am not a member of the Google team nor invested in their enterprise), when they introduced games into their environment, they made it separate from everything else. And when you do play games, you have other people to play against and with. What Google Plus offers is still a far cry from a virtual New Games tournament. She continues: ..."

How To Build An Earthship An Earth Ship can be as simple as a one room with a loft or as complex as a multi-family apartment complex. One of the most famous Earth Ship homes was built by the actor Dennis Weaver and cost millions of dollars to complete. A small one can be constructed for a few thousand dollars, basically just the cost of the cement mix and if you are in a climate that is compatible with adobe type construction, and will do the labor for yourself, even less. So, how is an Earth Ship constructed? The design concept utilizes modules that can be mixed and matched to form a unique finished product. The simplest way to describe how and earth ship is built is to walk you through the construction of the basic module called "The Hut".

» The Quotes of the Civilization V Debut Trailer Games of State Looking at the feedback which is appearing around the internet, it seems that people are questioning whether or not the quotes in the debut trailer for Civilization V are real. I am happy to confirm that all of them are real and listed below for your contextual pleasure, but first lets recap the trailer itself, courtesy of Machinima. In order, the quotes are: A moment comes, which comes but rarely in history, when we step out from the old to the new, when an age ends, and when the soul of a nation, long supressed, finds utterance. - Jawaharlal Nehru Nehru was the first Prime Minister of India and is considered one of the greatest Indian statesman. Along with Mahatma Gandhi, he is considered one of the architects of free India. The second quote is from a speech by General Douglas MacArthur. Duty, Honor, Country: Those three hallowed words reverently dictate what you ought to be, what you can be, what you will be. The third quote is the only one which is from ancient history.

A Spiraling Eye-Encrusted Overview of the Art of Alex Grey (Part 1) Introduction On the morning I started writing this, a five-year-old named Caleb happened to be visiting the house and interrupted my writing session to tell me (and this is an exact quote): "Jonathan, I see ghosty things other people don't see." I was tempted to reply: "That's interesting because I just started writing about a grown-up named Alex Grey who also sees ghosty things other people don't see." Instead, I asked Caleb to describe one of the ghosty things, and he said he saw a cupcake with a "skeleton head" in it. There were more details I couldn't quite follow due to the limits of his five-year-old vocabulary and his unfortunate inability to paint like Alex Grey. In fact, Alex Grey can paint unseen, ghosty things to a degree of potency that can only be compared to a Thor-hammer blow to the head while your body is being strafed by DMT-coated diamond bullets. Much of Alex's work is intended to be an illustration of classic phases of spiritual transformation. Life Cycle And Mr.

How to make a bamboo polytunnel We used a local renewable material, caña (like bamboo). You could use anything long and bendy – we would like to try it with hazel next time we are further north. The only items we paid for are the plastic and string (pita string made from fibres of the giant succulent Agave plant). It took six days with four people working. It's a lovely material to work with, flexible, strong and graceful. Step 1 Select locally growing caña and do a flex test. Step 2 Strip the outer leaves and bumpy nodules from the canes. Step 3 Bundle into a column of 7 canes tying with string at 25cm intervals. Step 4 Join one column to another to form a super column. Step 5 Dig holes to place feet of arches into. Step 6 Create smaller columns of 3 canes to act as supports between main arches Step 7 Protect plastic by covering outside edge of all canes with fabric or folded netting/fleece. Step 8 Roll plastic over the structure. Step 9 Fit doors (we reused glass doors from a skip). Step 10 Grow plants all year round.

Mastering The Five Fears: finding freedom in the human condition | The Art of Audacity Devil be gone When there is no enemy within, the enemies outside cannot hurt you.African Proverb You, dear reader, are one of the lucky ones. Of all the untold billions of intrepid souls who have trod this ancient Earth, you are among the most privileged. You were blessed to be born at a time of great opportunity and awakening. You enjoy social, economic and political liberties the likes of which your ancestors would not have dared dream. You have the freedom to travel wherever you wish. You have wealth too, sufficient to realise any vision you can imagine no matter how fantastic or grand. And the means for their attainment exists as well. How the kings of old would have envied your privileged position. You live in an age where the blind can be given sight, the deaf can be taught to hear, and the maimed can be given new limbs. In over ten thousand years of human civilisation there has never, existed a better time to be alive… then right now. You have all you need and much more besides.

Hermeneutics 1. The Beginnings of Hermeneutics The term hermeneutics, a Latinized version of the Greek hermeneutice, has been part of common language from the beginning of the 17th century. The Stoics, however, never developed a systematic theory of interpretation. With Augustine we encounter a thinker whose influence on modern hermeneutics has been profoundly acknowledged by Dilthey, Heidegger, and Gadamer. In spite of these and similar points of dialogue, it is in the wake of Martin Luther's sola scriptura that we see the dawn of a genuinely modern hermeneutics. Coming from a very different tradition, Giambattista Vico, the author of the Scienza nuova (1725), is another central figure in the development of early modern hermeneutics. Another philosopher who came to influence the early stages of modern hermeneutics is Benedict de Spinoza. Georg Friedrich Meier is another hermeneutically minded philosopher within the Leibniz-Wolffian paradigm. Like Ast, Wolf was trained in Classical studies. 2. 3.

What is Hermeneutics About Hermeneutics Hermeneutics is the art of interpreting. Although it began as a legal and theological methodology governing the application of civil law, canon law, and the interpretation of Scripture, it developed into a general theory of human understanding through the work of Friedrich Schleiermacher, Wilhelm Dilthey, Martin Heidegger, Hans-Georg Gadamer, Paul Ricoeur, and Jacques Derrida. Without collapsing critical thinking into relativism, hermeneutics recognizes the historicity of human understanding. Hermeneutics opposes the radical relativist notion that meaning cannot be trans-lingual. Hermeneutics is philosophy in the original sense of the word, the love of wisdom, the search for as comprehensive an understanding of human existence as possible. The Need for Inter-Disciplinary Collaboration Hermeneutics cannot happen without a level of inter-disciplinary collaboration that does not yet exist on university campuses. The Need for Inter-Linguistic Collaboration