The 6 Creepiest Places on Earth 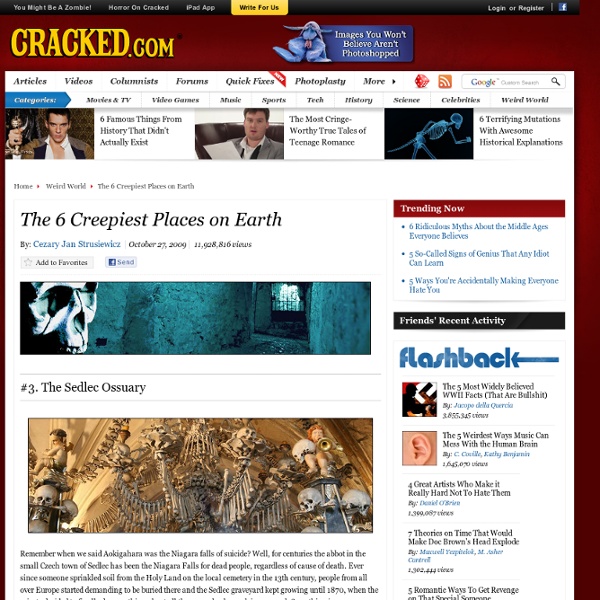 Remember when we said Aokigahara was the Niagara falls of suicide? Well, for centuries the abbot in the small Czech town of Sedlec has been the Niagara Falls for dead people, regardless of cause of death. Ever since someone sprinkled soil from the Holy Land on the local cemetery in the 13th century, people from all over Europe started demanding to be buried there and the Sedlec graveyard kept growing until 1870, when the priests decided to finally do something about all those surplus bones lying around. Something insane. Bam! Today, the Sedlec Ossuary is a chapel famous for being decorated with tens of thousands of human bones. We realize this is the Czech Republic and all, but it has been 27 years, surely Poltergeist was released out there already. At this point, does it really surprise anyone that the church became the inspiration for Dr. A hotel? Currently, most of the information on the complex comes from the locals who--what a surprise--refuse to go near the damn thing.

CSS Custom Fonts Tutorial Thousand's of fonts are available on the internet today, some are paid some are free to use. Download the font you want to use on your webpage. Then copy the downloaded fonts to your web server and use them on your webpages using CSS. We'll use the free ones for this tutorial. Vtks Revolt → Vtks Revolt Rockfont → Rockfont Gargoyles → Gargoyles MinstrelPosterTwo → MinstrelPosterTwo → Convert The Fonts The downloaded fonts will work on most of the browsers but won't work on IE. How to Convert There are many software's available on the internet, most of them paid. › Online TTF To EOT converter ‹ Upload the font you want to convert on this website and then download the converted font. → The CSS Code The Syntax: The Explanation:@font-face { → With this code we will define a new font-name and include the fonts that we have downloaded using src. font-family:font-name; → Here any name can be assigned to the font. The HTML Code Lets change the fonts inside a div with id change. The CSS Code

Some Moral Dilemmas The Trolley Problem, not in Grassian. Suggested by Philippa Foot (1920-2010), daughter of Esther, the daughter of President Grover Cleveland, but of British birth because of her father, William Sidney Bence Bosanquet. A trolley is running out of control down a track. In its path are five people who have been tied to the track by a mad philosopher. Fortunately, you could flip a switch, which will lead the trolley down a different track to safety. Unfortunately, there is a single person tied to that track. This is a classic "right vs. good" dilemma. The Costly Underwater Tunnel Compare: 112 men were killed during the construction of Hoover Dam on the Nevada-Arizona border (the "official" number was 98, but others had died from causes more difficult to identify -- or easier to ignore -- like by carbon monoxide poisoning): The first to die was a surveyor, J.G.

PechaKucha Speaker at a PechaKucha Night event in Cluj-Napoca, Romania PechaKucha or Pecha Kucha (Japanese: ペチャクチャ, IPA: [petɕa ku͍̥tɕa],[1] chit-chat) is a presentation style in which 20 slides are shown for 20 seconds each (6 minutes and 40 seconds in total). The format, which keeps presentations concise and fast-paced, powers multiple-speaker events called PechaKucha Nights (PKNs).[2][3] PechaKucha Night was devised in February 2003[4][5] by Astrid Klein and Mark Dytham of Tokyo's Klein-Dytham Architecture (KDa), as a way to attract people to SuperDeluxe, their experimental event space in Roppongi, and to allow young designers to meet, show their work, and exchange ideas.[6] In 2004, a few cities in Europe began holding PKNs, the first of several hundred cities that have since launched similar events around the world.[7][8] As of May 2014, PKNs were held in over 700 cities worldwide. [9] Format[edit] Protocol for starting a PechaKucha Night[edit] See also[edit] References[edit] External links[edit]

This is What Happens When You Give Thousands of Stickers to Thousands of Kids This December, in a surprisingly simple yet ridiculously amazing installation for the Queensland Gallery of Modern Ar, artist Yayoi Kusama constructed a large domestic environment, painting every wall, chair, table, piano, and household decoration a brilliant white, effectively serving as a giant white canvas. Over the course of two weeks, the museum’s smallest visitors were given thousands upon thousands of colored dot stickers and were invited to collaborate in the transformation of the space, turning the house into a vibrantly mottled explosion of color. How great is this? If you liked this you’ll also enjoy Roman Ondak’s Room of Heights and Karina Smigla-Bobinski’s helium-filled kinetic drawing sculpture. The first four images courtesy Queensland Art Gallery and photographer Mark Sherwood.

PhreakVids.com - Videos Related To Phreaking Tate Modern | Collection Displays © David Shrigley Dark humour is a type of comedy in which serious or taboo subjects are treated with levity or wit. The idea of dark humour was one of the central concepts of Surrealism. André Breton, the Surrealist leader who published his own Anthology of Black Humour , referred to this form of gallows humour as 'the mortal enemy of sentimentality'. The four artists in this display use a similar approach to illuminate and offset traumatic or grotesque subject matter. In 1925 a group of Surrealists including Breton developed the game of cadavre exquis , a version of Consequences in which players take turns to draw part of a body onto a piece of paper which has been folded to hide what the other players have drawn. Marcel Dzama's drawings often present fictional species - anthropomorphised and hybridised animals and plants - interacting with humans. David Shrigley's texts and drawings are similarly pared down, while communicating frequently complex layers of humour.

Your Age on Other Worlds Want to melt those years away? Travel to an outer planet! <div class="js-required"><hr> This Page requires a Javascript capable browser <hr></div> Fill in your birthdate below in the space indicated. The Days (And Years) Of Our Lives Looking at the numbers above, you'll immediately notice that you are different ages on the different planets. The earth is in motion. The top-like rotation of the earth on its axis is how we define the day. The revolution of the earth around the sun is how we define the year. We all learn in grade school that the planets move at differing rates around the sun. Why the huge differences in periods? Johannes Kepler Tycho Brahe Kepler briefly worked with the great Danish observational astronomer, Tycho Brahe. Here you see a planet in a very elliptical orbit. Kepler's third law is the one that interests us the most. Let's just solve for the period by taking the square root of both sides: The Gravity Of The Situation Isaac Newton ©2000 Ron Hipschman

The List Blog 10. Why are dogs committing suicide by jumpingoff the Overtoun Bridge? The Overtoun Bridge is an arch bridge located near Milton, Scotland, overthe Overtoun Burn. A burn is a term used to describe a type of streamwhich is smaller than a river. The long leap from the bridge onto the waterfalls of the Overtoun Estatealmost always results in immediate death. There have been a number of theories as to why dogs are choosing to endtheir lives by jumping off the bridge, ranging from the bridge being hauntedto the canines suffering from depression, or even picking up depressed orsuicidal feelings from the bridge. It has been suggested that the height of the bridge’s granite walls significantlyimpairs the dogs’ sense of sight and hearing, so when they go to investigatethe smell, they are unaware of the massive fall that awaits them. 9. In the 1960s a group a marine biologists planted microphones in the world’soceans to record the songs of blue whales. 8. 7. 6. 5. 4. In 1940, Willard F.M. 3. 2.

Gallows humor Gallows humor is humor in the face of or about very unpleasant, serious, or painful circumstances. Any humor that treats serious matters, such as death, war, disease, crime, etc., in a light, silly or satirical fashion is considered gallows humor.[1][2] Gallows humor has been described as a witticism in the face of – and in response to – a hopeless situation.[3] It arises from stressful, traumatic, or life-threatening situations, often in circumstances such that death is perceived as impending and unavoidable. Gallows humor is typically made by or about the victim of such a situation, but not the perpetrator of it.[4] Nature and functions[edit] Gallows humor has the social effect of strengthening the morale of the oppressed and undermines the morale of the oppressors.[6][7] According to Wylie Sypher, "to be able to laugh at evil and error means we have surmounted them Examples[edit] From William Shakespeare's play Romeo and Juliet, Act 3, Scene 1: Social uses[edit] See also[edit]

The kitchen spa Help your skin survive unpredictable weather with these two essential steps: exfoliation and moisturization. Skin-cell buildup leads to dryness, poor circulation and blemishes. Exfoliation eliminates these dead cells, revealing fresh skin that is better able to absorb moisture. And guys, take note: While men’s skin tends to be oilier than women’s, men may be more prone to epidermal dehydration. Food: Avocado Purpose: Moisturizer The scoop: Loaded with vitamins A, B, C and E, as well as potassium and fat, avocado is the perfect moisturizer. Recipe: Take a spent avocado peel and using gentle upward strokes, lightly massage your face with the inside of the peel. Food: Cucumber The scoop: Cucumbers contain compounds known to tighten pores and reduce inflammation, which is why they’re the classic choice for minimizing puffiness around the eyes. Recipe: Puree 1 tablespoon each of cucumber and parsley. Food: Oatmeal Purpose: Exfoliant and moisturizer Food: Peach Purpose: Exfoliant Food: Strawberry

21 Images You Won't Believe Aren't Photoshopped (Part 8) #9. If Who Framed Roger Rabbit Was Directed by Michel Gondry Via Wexas.com What looks like a Lego building cropped into a nature photograph is actually a real building that sleeps four adults. It's not the Treehotel's only room that will make your brain sneeze forth from your ears. #8. Via Metro.co.uk Even though this photo of an octopus playing with a Mr. Then you notice the shadows on the nose and body cast by the tentacle, and realize the Mr. Via Thisnext.com ... and you find out the Internet is full of the same picture from other angles. Via Paigntonpeople.co.uk #7. This looks like one of those "look how much this area has changed in just 30 years!" And before you rush in to make some racist comment about how the American side is a bustling civilization and the Mexican side is a deserted wasteland, you have the two mixed up. #6. Via Repperpatterns.com Once again we have something that not only looks like a Photoshop, but also looks like a lousy one. #5. Via Travelingbastards.blogspot.com

Frugal Beauty: 11 Household Items You Can Use As Beauty Products (photo: stuartpilbrow) A $25 face mask may be cheap enough to make it onto a magazine’s “bargain” beauty buys list, but there are less expensive and more effective head-to-toe pampering products to be had in your fridge and pantry. Even professional aestheticians and stylists turn to household staples like lemons, baking soda or yogurt when it’s time to clear skin of acne, soften rough patches or keep teeth sparkling. “What better way to achieve a natural glow, then from natural products?” asks Lily Morgan, the founder of Lily Organics Fresh Skin Care. Post your own tips below, and try these beauty uses for common household goods: Avocado * Scott-Vincent Borba, the author of “Skintervention: The Personalized Solution for Healthier, Younger and Flawless Looking Skin,” suggests mashing an avocado with the oil from one vitamin E soft gel, a dash of cayenne pepper and a tablespoon of honey. * Gently rub the inside of an avocado peel on your face, says Morgan. Baking soda Coffee Cucumbers Eggs Honey