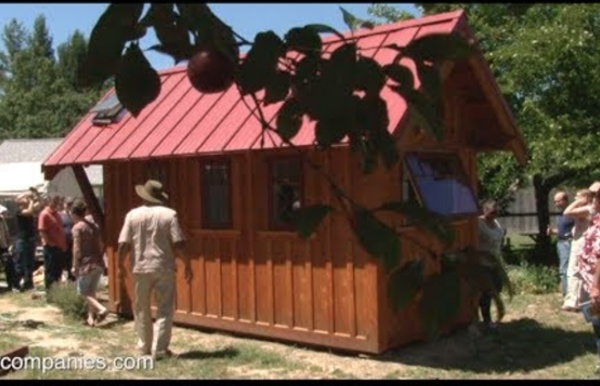 How You Can Simplify More Than Just Your Stuff I’m excited to announce the launch of The Power of Simple Living: 140 Inspiring Quotes to Simplify Your Life (And Get What You Want). I’m eager to teach what I’ve been learning and experimenting with in regards to simplicity, life and gaining our freedom back. This is part of that mission as a book that I’ve been working on that’s designed to help people like you and me who are hungry to simplify their lives in search of more personal, spiritual, and financial freedom. And I’m here to show you that, and more. Because this might sound obvious but… You Can Simplify More Than Just Your Stuff

"Will We All Fit?" 5 Tiny House Families - The Tiny House I often hear from people who would love to live in a tiny house, but who don’t believe they can because they have a family. Some people have one kid. Others have three kids and a dog. And plenty more don’t have kids right now, but know they will want them in the future. Can a family live in a tiny house? Super modern South African tiny house is bright and green I have often complained that a lot of tiny houses, being modelled on larger houses that get the shrink-ray, are designed for cuteness instead of practicality, with their tiny lofts that peak in the middle. Perhaps instead of using a traditional house as a model, designers should be looking more at learning from more modern designs like Airstream trailers or boats. That's why the INDAWO / lifePOD is so interesting. This design by the South African team of Collaborate000 architects, and product designers Dokter and Missses is super modern, and very much a product of its climate. © Brett Rubin The INDAWO / lifePOD is a lifestyle and design intervention that affords home owners a comfortable, functional experience inside a small space; to live in confluence with the needs of the planet now and in the future ....

Pure Salvage: 10 Eclectic Tiny Homes Built with 99% Scrap The premise of this small design-build firm is simple: almost everything you could want or need to build a new house is already in a a disused or abandoned building … so why not harvest 99% of your materials from such sources? Tiny Texas Houses builds custom homes and advises people on finding and reusing materials as well. “A generation of housing materials already harvested, sliced, diced, formed, and proven healthy, toxin free, priced for human energy is available in this country. Materials that are 100% American grown, mined, smelted, formed, and created with pride when we had such in our craftsmanship, and built to last for centuries.” The creations of Brad Kit­tel are eclectic, often rustic and peppered with various regional styles, both as a mode of creative expression and a simple byproduct of the materials found and re-purposed in the building process.

Tiny House Hunting: Season 2 Upload Watch more FYI FYI Television Network Loading... Working... How a talented architect makes an RV look like a charming cabin in the woods The tiny house movement has become a big thing as more and more people try to live with a smaller financial, environmental and physical footprint. As Alek Lisefski noted in his Tiny Project, it's about less house and more life. It's also about laws, that regulate what can go down a road, what can go on a property under zoning bylaws, what code it gets built under. That's why so many of the tiny houses are under 8'-6" wide and weigh less than 10,000 pounds, so that they can go down the road towed by a private car and be classed as an Recreational Vehicle, or RV. Historically, people would take their little RVs and go to RV parks, where they remain on their chassis but get hooked up to water and sewer.

Nate and Jen’s House on Wheels: Living Simply and Free in a Tiny Home My friend Nate originally bought a camper that he dismantled to build the tiny house on a trailer you’re about to see. The trailer is 8’3″ by 24’10″ and he used 2x4s instead of 2x8s for floor joists to decrease the home’s weight. He also used a lighter option for siding. Nate kept a blog while building the house which you can check out right here. Tiny House Hunting: Season 3 Upload Watch more FYI FYI Television Network Loading... Working... ► Play all