60 mind-bending rock formations from around the world [PICs] 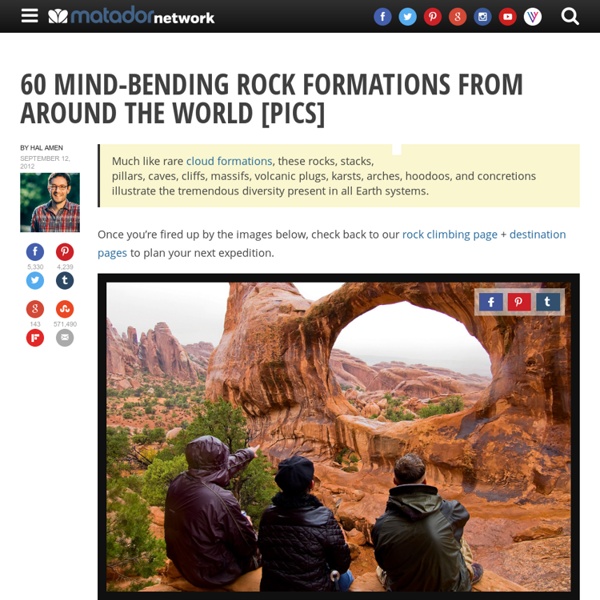 Much like rare cloud formations, these rocks, stacks, pillars, caves, cliffs, massifs, volcanic plugs, karsts, arches, hoodoos, and concretions illustrate the tremendous diversity present in all Earth systems. Once you’re fired up by the images below, check back to our rock climbing page + destination pages to plan your next expedition.

5 Pen Tricks from Japan - Uh oh... If you don’t have OCD already, I apologize. This post will give it to you… and you’ll thank me for it. When I was 15, I went to Japan for one year as an exchange student. The Japanese, Taiwanese, and Koreans — none of them can hold pens still for a second. Here are the different moves I’ll show (and name) here. The Helicopter (2) The Pincher (4) The Wheel (1) The Drummer (3) The Flip (5) After you’ve dropped your Bic for the 15,000th time and want to punch through a window, just remember: you can stop anytime you want. Enjoy!

Chrome Solutions 60 insane cloud formations from around the world [PICs] Cloud varieties go way beyond the cumulus, stratus, and cirrus we learn about in elementary school. Check out these wild natural phenomena. STANDING IN A CORNFIELD IN INDIANA, I once saw a fat roll cloud (like #4 below) float directly over my head. It’s a 12-year-old memory that remains fresh. I imagine a lot of these photographers having similar hesitations as they set up for the shots below. about | electric sheep Breathtaking Long Exposure Photography and How to Capture It As you know, our first free e-Book was launched and so we were all, including me, busy making Photoshop resources. Thanks to you, the e-Book has met with a landmark success. Now I am free to focus on the other subjects as well. For today, I chose a form of trick photography. As the name suggests, long exposure photo is when the camera’s image sensor was exposed to light for a longer period of time than usual. Examples Niagara Falls Exposure: 30 Seconds Image by John A Ryan Light House Exposure: 114 Seconds Image by MumbleyJoe (Tyler) Fireworks Exposure: 10 Seconds Image by Express Monorail Sky ways Exposure: 1 Hour Image by c@rljones Spinning Wheel Exposure: 20 Seconds Image by Sara Heinrichs (awfulsara) Waterfalls Exposure: 2-5 Minutes Image by Dene’ (Seattle) Miles Speed Exposure: 5-10 Seconds Image by Patrick Smith Photography Use of This Effect Even though the photos above must have described the use of this effect quite efficiently, let’s also give the text a chance. Taking the Shot Extra Tips

How to tie the world together: online knotting reference books The sheer number and diversity of knots that was once in use would be bewildering to the modern city-dweller. About 4,000 different knots are described, ranging from the very simple to the extremely complex. Not so long ago, each profession or trade had adopted the knots best suited to its requirements, and knotting was part of their daily lives. There are some good knotting reference books available online, and all of them are older than most of us. Knots can be subdivided according to their general purpose: to attach a rope to another rope (fastening knots), to attach a rope to an object (hitches), to shorten a rope without cutting it (shortening knots), to form an enlarged end on a rope (ending knots), or to attach two rope ends together in such a way that they represent a smooth and even surface (splices). Basic knot technology Desirable features of most knots are that they may be quickly tied, easily untied and will not slip under strain. right). Fastening knots Splices Hitches Handcuffs

Jason Nelson digital art and poetry Young girl who's best friends with African wildlife Born in Africa to French wildlife photographer parents, Tippi Degré had a most unusual childhood. The young girl grew up in the African desert and developed an uncommon bond with many untamed animals including a 28-year old African elephant named Abu, a leopard nicknamed J&B, lion cubs, giraffes, an Ostrich, a mongoose, crocodiles, a baby zebra, a cheetah, giant bullfrogs, and even a snake. Africa was her home for many years and Tippi became friends with the ferocious animals and tribespeople of Namibia. As a young child, the French girl said, “I don’t have friends here. Because I never see children. Parents Alain Degré and Sylvie Robert documented Tippi’s life and relationships with the African wildlife and transformed those moments into captivating books and movies. Looking past some fairly obvious and natural parental worries, Tippi had the most amazing upbringing.