6 Reasons Why Organizations Should Never Hesitate to Steal Thunder. This is a guest post by An-Sofie Claeys, an assistant professor at KU Leuven who specializes in crisis communication. 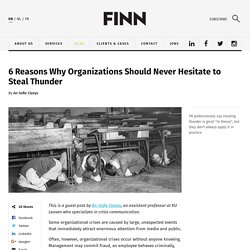 Some organizational crises are caused by large, unexpected events that immediately attract enormous attention from media and public. Often, however, organizational crises occur without anyone knowing. Management may commit fraud, an employee behaves criminally, etc. In situations like these, crisis communication research has shown strong and unanimous support for what is called 'stealing thunder' - defined as "breaking the news about its own crisis before the crisis is discovered by the media or other interested parties” (Arpan & Roskos-Ewoldsen, 2005, p. 425). Unfortunately, this type of self-disclosure is rare in practice. When asked about stealing thunder, 25 Belgian PR-professionals that were interviewed for a qualitative study by the Institute for Media Studies (KU Leuven) indicated that stealing thunder is interesting in theory (Claeys & Opgenhaffen, 2015). 1. 2. 3. 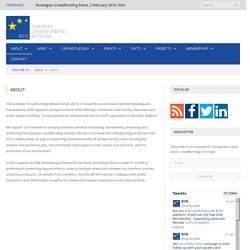 We support our members in carrying initiatives aimed at innovating, representing, promoting and protecting the European crowdfunding industry. We aim to increase the understanding of the key roles that crowdfunding can play in supporting entrepreneurship of all types and its role in funding the creation and protection jobs, the enrichment of European society, culture and economy, and the protection of our environment. What We Learned From Failing to Hit Our 12-month Growth Goal. Kan man få fodfæste på det amerikanske marked på 30 dage? Etablér en solid, bæredygtig virksomhed i USA på bare 30 dage! 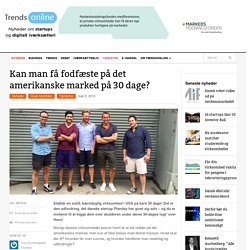 Kan de klare den og kan de følge i fodsporene på virksomheder som Falcon Social (også hjulpet af Lemonsqueeze), Trustpilot og Zendesk? Regardless of your ideal mix of demand generation programs, I’m willing to bet that most of them are designed to bring prospects to your website in the hopes of later converting them to a paying customer. 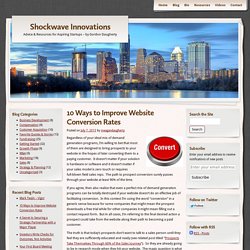 It doesn’t matter if your solution is hardware or software and it doesn’t matter if your sales model is zero touch or requires full-blown field sales reps. The path to prospect conversion surely passes through your website at least 90% of the time. If you agree, then also realize that even a perfect mix of demand generation programs can be totally destroyed if your website doesn’t do an effective job of facilitating conversion.

In this context I’m using the word “conversion” in a generic sense because for some companies that might mean the prospect downloads a free trial while for other companies it might mean filling out a contact request form. Web Chat Nurturing You’re probably already doing this with your other marketing campaigns but the concept also applies to your website. Videos.

Cleantech Scandinavia. Our Startup’s Wins, Fails and Lessons From the Last 6 Months. The Angel VC: Five ways to build a $100 million business. To build a Web company with $100 million in annual revenues*, you essentially need: Salespeople sometimes refer to "elephants", "deers" and "rabbits" when they talk about the first three categories of customers. 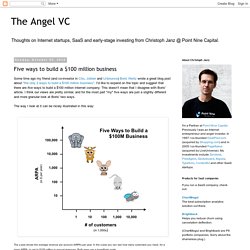 To extend the metaphor to the 4th and 5th type of customer, let's call them "mice" and "flies". So how can you hunt 1,000 elephants, 10,000 deers, 100,000 rabbits, 1,000,000 mice or 10,000,000 flies? Let's take a look at it in reverse order. Hunting flies In order to get to 10 million active users you need roughly 100 million people who download your app or use your website. Hunting mice To acquire one million consumers or prosumers who pay you roughly $100 per year, you need to get at least 10-20 million people to try your application. Five Crisis Communication Plan Essentials. By David Calusdian, Executive Vice President & Partner *Originally appeared on OpenView Labs, the strategic and operational consulting arm of OpenView Venture Partners, a global Venture Capital fund that invests in expansion stage technology companies. 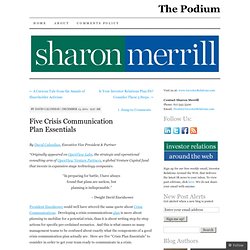 “In preparing for battle, I have always found that plans are useless, but planning is indispensable.” – Dwight David Eisenhower President Eisenhower could well have uttered the same quote about Crisis Communications. Developing a crisis communications plan is more about planning to mobilize for a potential crisis, than it is about writing step-by-step actions for specific pre-ordained scenarios. 1) Identify the Crisis Team It’s important that the right people from the appropriate functional areas of the organization are ready to respond at a moment’s notice to a crisis and understand their responsibilities as members of the team. 2) Constantly Assess Your Primary Risks 3) Develop Messaging Around the Key Risks Follow us on: Like this: Related.