Haunting Photos Of Abandoned Cities Around The World 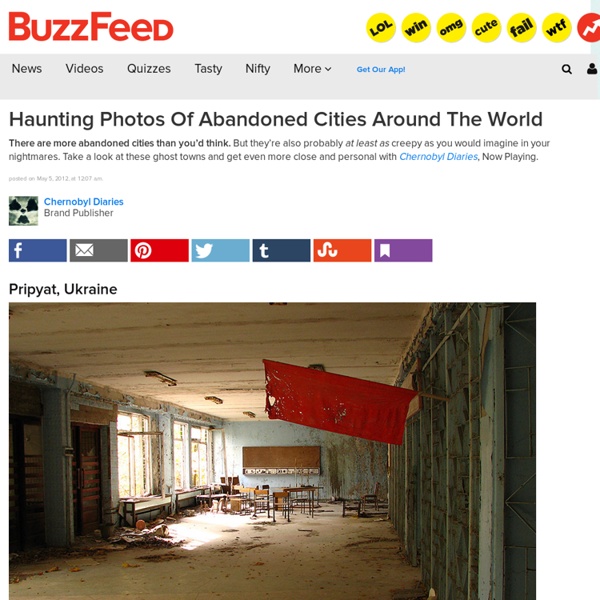 Pripyat, Ukraine Site of the infamous Chernobyl incident, the entire city had to be abandoned in 1986 due to nuclear radiation. Sanzhi District, Taiwan The “Sanzhi UFO houses” were a major development project for some pretty unusual-looking vacation homes, which was abandoned in 1978 before it could be completed. The site was demolished in 2008, and is now being redeveloped. Craco, Italy Craco was a medieval village built high up on a steep summit for defensive reasons, but recurring earthquakes eventually made it impossible to sustain. Today, less than 800 people live there in a commune, while the majority remains eerily uninhabited. Kolmanskop, Namibia Formerly a bustling diamond mining town, after the market declined, inhabitants began leaving the town after WWI; by 1954, it was completely deserted. Oradour-sur-Glane, France Oradour-sur-Glane was a village destroyed by a German military unit in 1944, killing 642 of its inhabitants.

The world without us: Chernobyl Nature has made a determined comeback In the 20 years since Chernobyl's reactor No. 4 turned a bustling Soviet city into a ghost town. The people are gone, and in their place are now thriving populations of deer, elk, wild boar, wolves, and even lynx. Trees are pushing up through Lenin Avenue and moss is clinging to the broken sidewalks and abandoned buildings throughout the 19-miles that make up the Exclusion Zone. Tim Mousseau of the University of South Carolina has been studying the effects of radiation on Chernobyl's wildlife, and told National Geographic that despite the higher levels of genetic abnormalities, "one of the great ironies of this particular tragedy is that many animals are doing considerably better than when the humans were there."

Jonas Liveröd Here you can buy limited edition fine art prints by Swedish artist Jonas Liveröd. All artworks are giclee printed on 308gsm Hahnemühle fine art paper. Each artwork is a limited edition, either signed on the print or comes with a signed and numbered Cetificate of Authenticity. Jonas Liverod is a Malmoe based artist born in 1974 in Kristinehamn, Sweden. He has done several acclaimed art exhibitions throughout the years and his works have been published in numerous books and magazines around the world.

102 Year Old Abandoned Ship Grows A Forest In the notoriously polluted waters of Homebush Bay in Sydney, Australia, there is a Floating Forrest flourishing on an abandoned 102-year-old transport vessel. It looks like something out of a movie or some type of art installation, but what makes this juxtaposition of nature and industry so majestic is that the plant-life flourishing on this ancient ship came into being through natural causes. This amazing ship is the SS Ayrfield, a 1,140-tonne vessel built in 1911 as a steam collier that was later used in WWII as a transport ship. In 1972 the SS Ayrfield was brought to Homebush Bay to be dismantled. 10 Abandoned Psych Wards Photographers Love Sneaking Into Abandoned buildings have long held a fascination for me. They imply a mystery (what happened?) and a challenge (can I get inside and see?) as well as a thrilling bit of danger (guard dogs!

Chris Jordan - In Katrina's Wake This series, photographed in New Orleans in November and December of 2005, portrays the cost of Hurricane Katrina on a personal scale. Although the subjects are quite different from those in my earlier Intolerable Beauty series, this project is motivated by the same concerns about our runaway consumerism. There is evidence to suggest that Katrina was not an entirely natural event like an earthquake or tsunami. Avner Dorman Avner Dorman ( Hebrew : אבנר דורמן) (born April 14, 1975 in Tel Aviv , Israel ) is an Israeli-born composer of contemporary classical music. Biography [ edit ] Avner Dorman holds a Doctorate in Music Composition from the Juilliard School [ 1 ] where he studied as a C.V. The 33 Most Beautiful Abandoned Places In The World Many people doesn’t know, and didn’t even heard about these famous abandoned places. Many of these places are really something amazing, but they are also really sad when you take a closer look at them. On the folowing list, you can see abandoned planes, abandoned ships, as well as the abandoned houses, and so many other things, that are really amazing and magnificent. So, check out these amazing abandoned places photos. 1.

60 insane cloud formations from around the world [PICs] Cloud varieties go way beyond the cumulus, stratus, and cirrus we learn about in elementary school. Check out these wild natural phenomena. STANDING IN A CORNFIELD IN INDIANA, I once saw a fat roll cloud (like #4 below) float directly over my head.

The Ruins of Detroit Posted Feb 07, 2011 Share This Gallery inShare850 Up and down Detroit’s streets, buildings stand abandoned and in ruin. The 27 Incredible Once In A Lifetime Shots Posted by admin on Apr 3, 2013 in Gallery | 47 comments Today we collect photos that we can see only one in lifetime and that if we had a luck to see it. These are the photos which we must save and enjoy in them all the time, because they are moment of an amazing history. List of the 30 incredible once in a lifetime shots is something that we will love and enjoy every day.

Water Wigs on Behance We just finished shooting a new project we call Water Wigs. The concept is simple and it is another visual exploration of something new and totally different. We found a bunch of awesome bald men and hurled water balloons at their heads, to capture the explosion of water at various intervals. The result a new head of of water hair! 11 Abandoned American Hospitals and Asylums With some of the most disturbing and tragic histories of any buildings in the US, asylums and hospitals are way beyond creepy . Many of them were built in the late 1800s, when “mental illnesses” (such as masturbation, menopause, and teenage rebellion) were considered dangerous enough to lock someone in an asylum. A pain-inflicting misunderstanding of mental illness combined with a chronic mistreatment of its sufferers meant that many people were never released and spent the remainder of their lives in these horrible institutions. In addition to asylums, many sanatoriums were constructed around this time to care for the poor and very sick.

Abandoned Amusement Park Amusement park is the generic term for a collection of rides and other entertainment attractions assembled for the purpose of entertaining a large group of people. An amusement park is more elaborate than a simple city park or playground, usually providing attractions meant to cater to adults, teenagers, and small children. A theme park is a type of amusement park which has been built around one or more themes, such as an American West theme, or Atlantis. Today, the terms amusement parks and theme parks are often used interchangeably. Most amusement parks have a fixed location, as compared to travelling funfairs and carnivals. These temporary types of amusement parks, are usually present for a few days or weeks per year, such as funfairs in the United Kingdom, and carnivals (temporarily set up in a vacant lot or parking lots) and fairs (temporarily operated in a fair ground) in the United States.