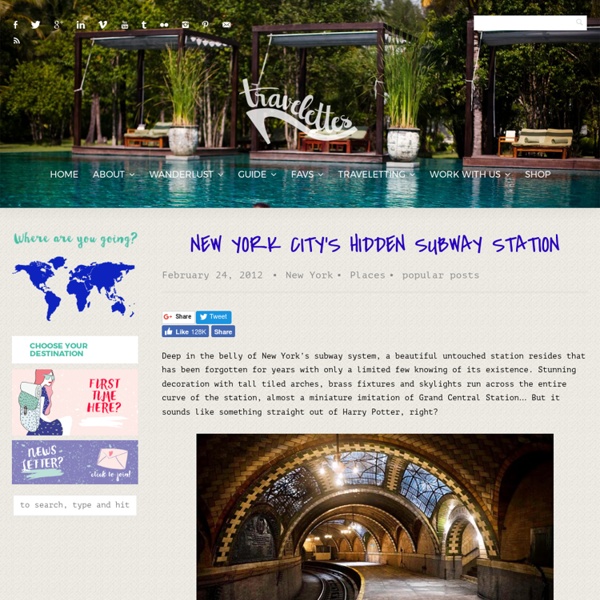 Deep in the belly of New York’s subway system, a beautiful untouched station resides that has been forgotten for years with only a limited few knowing of its existence. Stunning decoration with tall tiled arches, brass fixtures and skylights run across the entire curve of the station, almost a miniature imitation of Grand Central Station… But it sounds like something straight out of Harry Potter, right? It was opened in 1904, with the hope of making it the crowning glory of the New York subway system in elegant architecture and a place for commemorative plaques to honour the work that had resulted in such a successful underground mass transit system. It was to be the original southern terminus of the first ‘Manhattan Main Line’; however the station was closed and boarded up in 1945. The reason for its closure was that newer longer cars were required to match the demand of passengers that passed through the system.

One of D.C.’s Most Contentious Pieces of Real Estate is 25 Feet Underground The Dupont Underground's east platform, which the organization will be opening first. (Photo: Dupont Underground/Pat Padua) In the upscale Washington, D.C. neighborhood of Dupont Circle, where galleries, bars, and bookshops jostle for room, a 75,000-square-foot expanse in the heart of the quarter has been almost untouched for 20 years. That’s because in order to access it, you have to grab a flashlight and descend 25 feet below ground, into the vast, abandoned streetcar tunnels that flank Connecticut Avenue. For the past 60 years, the city and its residents have wondered what to do with this vast subterranean space, whose history features a long list of failed attempts to repurpose it, including plans to make it into a gym, a greenmarket, and a storage facility for funeral urns.

Abandoned Stations : Worth St Worth St Passenger service: 1904-1962. Existing abandoned portions: 2 platforms (on tracks in service). Touring: 6 trains, running between Brooklyn Bridge and Canal St. BACK TO THE FUTURE : Irina Werning I love old photos. I admit being a nosey photographer. As soon as I step into someone else’s house, I start sniffing for them. The Luxury Resort Dhigu, Maldives The luxury Dhigu Resort, Maldives Anantara Dhigu Resort & Spa is encircled by mystic lagoons and unspoilt crystal shores, the resort is a heavenly sanctuary on a secluded paradise island, offering barefoot elegance in one of the world’s most celebrated tropical havens. Here the sparkling turquoise waters of the Indian Ocean offer an endless horizon of aquatic allure and the evocative location is matched by a tranquil island design style. Anantara Dhigu is a luxurious five-star resort hidden on tropical terrain on Dhigufinolhu Island in the Maldives’ South Male Atoll, a mere 35 minute speedboat journey from the island nation’s international airport, or a scenic five minutes by private chartered seaplane.

Five of the World's Best-Kept Secret Destinations So you are a world traveler, you’ve visited four or five continents, you’ve even run out of fingers and toes to add up all of the countries you’ve seen … now what do you do? You branch out. Forget Paris, London or Rome, these five world destinations are some of the best kept secrets among the locals, but we’re not hording them another minute. The word is out! Yogyakarta, Indonesia The Most Insane Abandoned Places in New York City  By: Jess Novak Credit: 2E After discovering the craziest abandoned places in New York state, we decided to take another look through New York for spooky abandoned spaces -- and this time, keep it close to home. Guide to flirting Why do we flirt? Flirting is much more than just a bit of fun: it is a universal and essential aspect of human interaction. Anthropological research shows that flirting is to be found, in some form, in all cultures and societies around the world. Flirting is a basic instinct, part of human nature. This is not surprising: if we did not initiate contact and express interest in members of the opposite sex, we would not progress to reproduction, and the human species would become extinct.

A dog's seeing eye dog Lily is a Great Dane that has been blind since a bizarre medical condition required that she have both eyes removed. For the last 5 years, Maddison, another Great Dane, has been her sight. The two are, of course, inseparable. (via Weird Universe, Daily Record, The Sun) The 12 Most Beautiful Castles in Europe For centuries, people have been fascinated with castles. Whether they were home to cruel leaders (such as Count Dracula) or the settings of love stories, the castles always played an important part in European history. Nowadays, they make “guest appearances” in movies or are the perfect place to spend an interesting vacation.

Haunting Photos of Europe's Abandoned Buildings, From Steel Plants to Castles The main hall of a steel plant office in France. "The most painful thing in this is to watch it crumble", says Hans. (All Photos: Hans van Vrouwerf) This photo essay is one of a five-part series with Atlas Obscura and Olympus. We asked some of our favorite photographers to take a quest with an Olympus E-M5 Mark II camera, and these are the results of their adventures.

Disney Princesses In Accurate Period Costume These are very beautiful drawings! Although I am sad to see Belle looking so unlike herself. On a different note: I’d love to know what the reference was for the period costuming for each Princess. Given what I know about the stories, a lot of these seem a little inaccurate time period wise (I have no idea about the costumes other than that they look gorgeous): - As far as I know, the German “Snow White” was published in 1812 with the rest of the Grimm’s collected works; even her supposed ‘real’ influence lived in the 18th century.

65 Beautiful Fonts You Can Download For Free Freebie 65 Beautiful Fonts You Can Download For Free by Alex on Aug 9, 2012 • 9:43 am 17 Comments There are so many free fonts all around the web these days and sometimes it makes me think is their any really point purchasing fonts. I’ve decide to collect 65 fonts which are suitable for web, print, etc just overall high fonts which can be used in design projects. If you like fonts, you’ll love our favorite premium font, check it out here on Envato Market.